The Corona Brandix cluster was imported from India; skipped by the glory of Wiyathmaga; Government depressed due to information leak 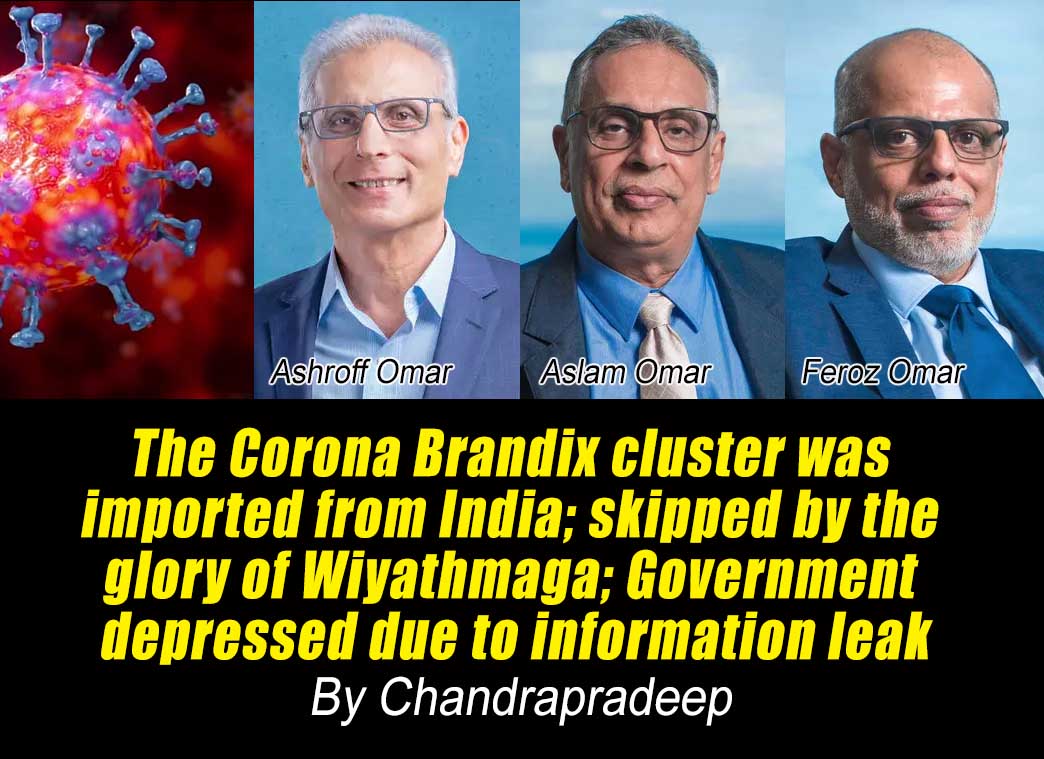 (Lanka-e-News -08.Oct.2020, 8.00PM)  It is suspected that the Corona cluster found at the Brandix garment factory in Minuwangoda was started from a flight which came from Visakapattannam India to Mattala on the 22nd of September carrying a group of Indians by Sri Lakan airline flight UL 1159. The group was brought in by a charter plan sponsored by Brandix. (Evidence shows in a photo) According to reports reaching Lanka e news the group has taken a detour bypassing the proper quarantine process of Sri Lanka because if they are properly quarantined for 14 days at a quarantine center and another 14 days at home, they should be released on October 20th. If the minimum quarantine procedure had been followed, the group would have been at the registered quarantine centre by the 5th in spite they find the first patient. But Brandix released them on a "promise" of self-quarantine, with the highest level of government intervention in Sri Lanka.

The Indians brought to sew 'Jockey'

Brandix also has a factory in India. Due to the Kovid crisis, garment orders given to India by foreign countries were canceled and being received by Sri Lanka. Accordingly, an order for a specific undergarment named 'Jockey' which was manufactured in a factory in India has been diverted to Sri Lanka. To meet those needs, a special team has been brought to Sri Lanka for the relevant productionnn that was produced in India. As of September 22nd Brandix has imported three charter flights from India to Mattala. The said Indian team had not been subjected to the quarantine process of Sri Lanka and had been working at the Brandix factory since the next day.  Although Kovid 19 was infected to a helpless maid who worked at Brandix on Oct. 5th the health department said yesterday the 7th that according to scientific data by September 25th, the corona virus had been present in the factory, and since then the company employees have showed corona symptoms. Six maids with corona symptoms, including fever, were said to be ill, the factotry workers say they were forced to come for work by the factory manager.

Accordingly, it is now very clear that the initial person found at the Brandix Corona cluster was not the same woman recently slandered by the state sordid media. There is a reasonable doubt that this was started by the above Indians.

Indians has also gone to the Colombo Karoake

It is reported that the Indian nationals who came to Sri Lannka have visited several Brandix branches in Sri Lanka. Brandix has branches in Seeduwa, Mirigama, Pannala and Batticaloa. It is not known which branch the Indians visited but areas such as Seeduwa, Pannala and Mirigama are currently subjected to corona curfew. One of the Indians had visited several well-known karaoke clubs in Colombo with a Brandix employee. A senior Brandix official told Lanka e News that the Indian team had now returned to India. The anti corona task force of Sri Lanka is already aware of this karaoke story on the 5th and had proposed a curfew in Colombo on the same day, but it was later postponed by a higher order, a senior police official told us.

How did the Brandix owners use their top political connections to bring the aforementioned Indians into the country without quarantine?

Who skipped without quarantine and how?

It is Martin Trust, a businessman with a vision for the United States, is considered the father of the modern garment industry in Sri Lanka today. Brandix was founded in 1969 with his help. Then, in 1972, Brandix merged with Omar Group. Later, under the chairmanship and CEO of Deshamanya Ken Balendran, a renowned Sri Lankan businessman, Brandix rose to prominence in the Sri Lankan apparel industry. Ashraff Omar has been the Director and CEO of Brandix since the retirement of Ken Balendran. Aslam Omar and Feroz Omar of the Omar family are also directors of Brandix. All the remaining directors are four. So it is safe to say that Brandix was one of Omar's businesses today.

Ashraff Omar is one of the leaders of the Viyathmaga organization that paved the way for Gotabhaya Rajapaksa to come to power. Before Ashraff Omar, Kamal Gunaratne’s are crumbs.  Lanka e News has unofficially reported that Gotabhaya Rajapaksa's first Rs. one thousand million for the last election campaign was donated by Ashraff Omar. At the same time, Harsha Abeywickrema, a former Air Force Commander (2011-2014), is the Head of Security for the Brandix Group. Harsha was also the Chairman of the Bank of Ceylon of the 52 Days Rajapaksa government.

Is it not strange to tell the people of Sri Lanka that the aforesaid group of Indians came out of the quarantine process in Sri Lanka used Brandix's close ties from the President to the Secretary to the Ministry of Defense, Kamal Gunaratne.

Shavendra and Brandix refuse after being questioned in Parliament When the Leader of the Opposition Sajith Premadasa and Galle MP Manusha Nanayakkara revealed these facts in Parliament yesterday 7th a group including a Minister of the ruling Mahindananda Aluthgamage severely dissuaded the fact. When questioned about the incident in Parliament, Army Commander Shavendra Silva, the 'Corona boss' of Sri Lanka, told the media that the allegation was investigated and were completely untrue.

Brandix later issued a statement denying the allegations. The statement said, It is true that the crew was brought from India on three charter planes, but all of them were Sri Lankans working at their factory in India, and on all three occasions there were no Indian nationals, and at least no relevant fabric was imported from India, The Sri Lankans who arrived also followed the proper quarantine policies in Sri Lanka, the statement said.

The above two denials have left big questions. Brandix's acknowledgment in Shavendra Silva's denial does not say that it brought people from India on three occasions. Brandix's denial did not reveal the dates on which the three aircrafts arrived. Also, if they only brought in Sri Lankan workers, they would not reveal which quarantine centers they are currently in. Why is that?

However, the last information received at the last moment of writing this report said that after the incident was leaked, President Gotabhaya called Ashraff Omar and reprimanded him saying 'you ruined me'.

Postscript:
The Brandix Corona cluster originated from India was first reported by a website affiliated with the Rajapaksa family. 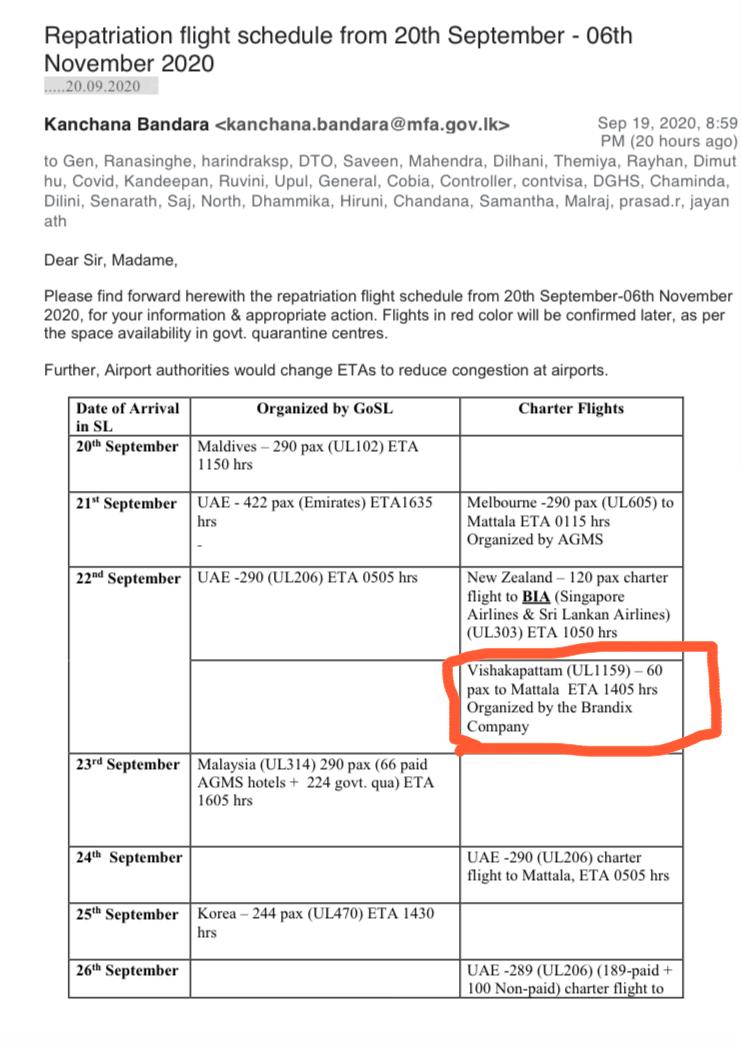