Becoming a Chinese refugee and how Corona laws are flexible to the Chinese? 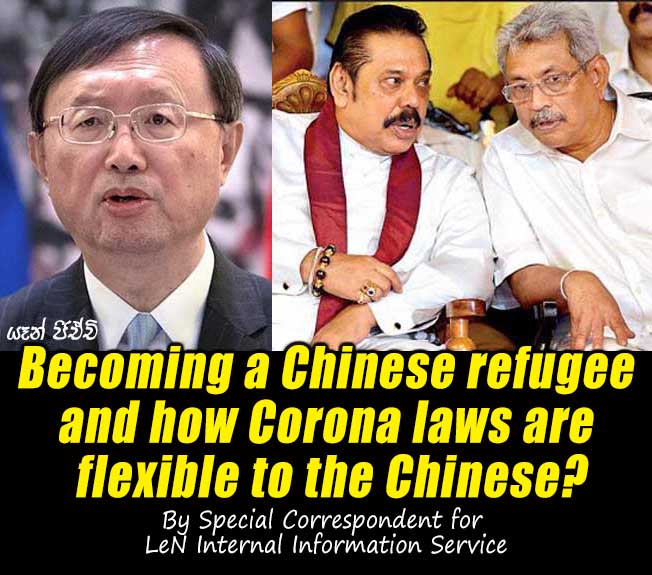 (Lanka-e-News -11.Oct.2020, 10.00AM) A Chinese delegation has come to Sri Lanka. When questioned in the parliament are they complying with the quarantine laws? The health minister says they are coming to the island following a PCR and we are also doing a PCR at the airport. Further she says he is a top man in China, I think he is the second top person in the communist party, hope you all know about the Chinese communist party and how they work.

The communist party, their positions and their working style should be bigger to the Chinese. This is not a Chinese colony; he is not a big person here. He should comply with the countrys laws. We should neither deal hostile with foreign countries nor should we work losing our respect. But now our government doesn't say meek against what Chinese are doing in our country because now the government has become a Chinese refugee hence the government is trapped in the Chinese neo-colonial strategic debt trap.

It is noteworthy that a Chinese delegation broke into Sri Lanka at this time and was led by a former Foreign Minister and a high ranking official of the Chinese Communist Party. Not only is this the first time a Chinese delegation has visited a South Asian country since the Corona epidemic, but currently in America a session of foreign ministers from four major countries in the world is underway about the Chinese influence in the Indian ocean. What China is doing is giving the signal to the US that 'Sri Lanka is ours' making us a victim.

The Chinese 'system' is also a wonderful one. According to the Communist Party's promotions, the party's position is higher than that of a minister. A police officer is higher in hierarchy than a judge. So the judge should accept without any argument what a police officer says in court. That is the so-called Chinese 'system'. Accordingly, even though he is a former Foreign Minister, Yang Jiechi is a higher authority in the Chinese government. He was a member of the Politburo, the highest body of the Chinese Communist Party Director, Foreign Policy Commission of the Central Committee. It is the top policy-making body in China. According to our sources, this group is coming to force Sri Lanka to trade in foreign currencies in Chinese Yuan instead of US Dollars. What the Chinese are doing behind this corona economic crisis is forcing them to trade in yuan with China and pro Chinese friendly nations. In order to agree the Chinese will give a bundle of money to the  Rajapaksa brothers.

Although the ordinary people in Sri Lanka do not know, but now Sri Lanka is an unofficial Chinese colony. When we conform few information you would be surprised. The Chinese already own more land than the Colombo district in Sri Lanka. The entire Hambantota port and two thirds of the Colombo port are owned by China. Only God above knows what the Chinese bring into our country from those ports. There are about 300,000 Chinese in Sri Lanka. Among them there are about 500 trained Chinese security forces in Sri Lanka like civilian Chinese. They have firearms in their hands. They have told our governments that they are here for the protection of the Chinese living here. However, Sri Lanka has already agreed to maintain a Chinese police station in the Chinese part of the Colombo port city as part of the same agreement. It is said that the Chinese police are maintained as a police division under our IGP. However it is not stated anywhere as to how many policemen belong to that division. The entire police force in Sri Lanka has less than 100,000. According to the population of China, if around 200,000 Chinese come to the Chinese police division that is being set up, the Sri Lankan police have to be dissolved.

Not only that. China gives money to all political parties in Sri Lanka. Why there are established first, second, third, fourth and fifth political forces in Sri Lanka? It is a well known secret that for a long time the monthly expenditure of the JVP head office was borne by China. Not only political parties but now they also give money to media institutions. Last year alone, about 2,000 Sri Lankans, including journalists and artists, were brought to China to attend various workshops and festivals. So no political party, media institution or journalist in Sri Lanka will oppose China. I remember how Sirasa, which initially opposed the port city, took a brick and went all over Sri Lanka and whitewashed the work. It's not just that because China paid Sirasa well for the work.

The Chinese have penetrated into the university system in Sri Lanka. Almost every university has a Chinese project of some kind. The Chinese have given them all the financial resources and scholarships they need. Our doctors and professors are also in their hands. That's why they remain meek against China.

Now these Chinese have pervaded to the temples in Sri Lanka. They are not Chinese monks but Robed Chinese intelligence. There are two such temples at the Galagoda Aththe Gnanasara Thero's temple in Rajagiriya . There are four such persons in the center of Rathana Thero. There are about ten such Chinese in the Asgiriya Maha Viharaya. So far only the Malwatta temple has survived without the Chinese. Difficult to predict what will happen tomorrow or the day after. The robed Chinese intelligence services are the ones who give money and theories to the so-called 'national organizations' of the monks in those temples. That is why there are so many 'national organizations' in Sri Lanka. Let me give you an example. Do you know the campaign 'Lanka is the birthplace of Buddha' is lobbied by the Chinese and It is purely a long-term Chinese project. The unbreakable bond that the people of Sri Lanka have with India is that the Buddha was really born in India. The Chinese long-term project is to promote Lanka is the birthplace of Buddah is to break the bond between Sri Lanka and India. That is why a blatant lie is spread in the society that 'Sri Lanka is the birthplace of the
Buddha'. It is the Chinese who spend for it.

No one in Sri Lanka today opposes China because of the above. Only Lanka e News writes directly against the Chinese colonization taking place in Sri Lanka.

Why can't our government apply and do the same to our foreign workers?

The problem I have now is not politics, but why can't the GOSL apply the same method that is applied to the Chinese delegation that has come to Sri Lanka for the Sri Lanka migrant workers? If a Chinese can complete PCR in China and if they can undergo a PCR on arrival and if both confirms negative and if they are sure of meeting the president and the premier why cannot we give the same opportunity to our foreign workers who are stranded in the gulf. If still not sure why can’t they further stay in quarantine for another week and do another PCR and undergo a self quarantine for the balance period? Then the congestion at government quarantine centers can also be reduced. If that is not done, it will only be possible to increase the money going into the pockets of Dilith Jayaweera and other politicians who are exploiting the local foreign workers by ripping their hard earned money when they wish to come to their own motherland.

Now, don't come and comment on "mud news, false news" using social media goons. Nothing happens except the waste of data (We do not fall for mudslinging). If you want to know, find out how other countries in the world bringing their people from abroad. Find out the rates of the airline tickets (compare prices from the Middle East to India and from the Middle East to Sri Lanka). There are plenty of countries who bring their people without forcing them to undergo 14 days paid quarantine but forward them for self quarantine following three negative PCR tests. If that is done the Rajapaksa disciples cannot rip the poor migrant workers pocket and increase their profits. Other country does not use such wicked opportunities as such to cover the losses of their airlines. For example, instead of allowing another airline to come to Sri Lanka, our airline will charge about five times the price of another airline ticket. (Never say the plane is coming empty to take the passengers, if that is so the fare would only be double not five times more than usual). In the embassy travel registration form there is a clause to be marked "Which hotel do you wish to get quarantined for the people who wish to visit Sri Lanka. Markings are only allowed for two hotels named Negombo Jetwing and Waskaduwa Citrus. Despite people who gets quarantined doesn’t use the swimming pool and the gym they have to pay Rs. 17,000 to Rs. 20,000 per day. It is ridiculous that the Army Commander himself said to the media that even the food served in such hotels are not good.

The problem lies in the backbone of our politicians and bureaucrats who straighten their backs and talk like lions to the deprived workers in the gulf and professors like Mahinda Pathirana who justify them and write essays on social media. Those mouths and pen cannot open or write against the Chinese. Many people say that they cannot find a single "bayyo" in the social media. There are, but these days they share only cookery recipes and home gardening in the facebook. Even Minister Pavithra, who is really rhetorical, said, "Yang jiechi is a big man in china" she even in Parliament, she was so loyal to China that she spoke in ascrounge tone begging that she would soon discharge in the saree. It shows the extent of biased and cowardice, the amount how we prostrate.