20th A verdict out unofficially; Due to the cowardice act of five judges’, blood would flow across motherland..! 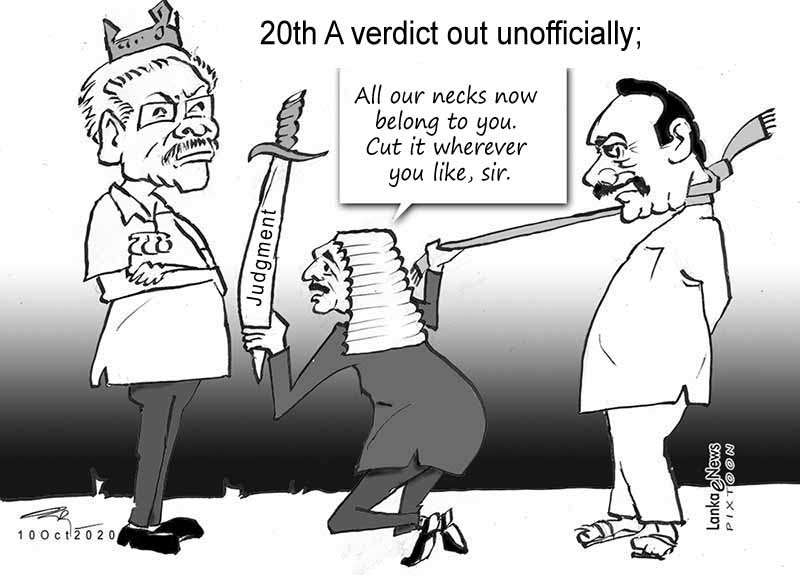 (Lanka-e-News -12.Oct.2020, 7.15AM) Five panel judges verdict of the 39 petitions filed in the Supreme Court against the 20th Amendment has reached the people through devious sources. Article 121 (3) of the Constitution states, decision of such cases is given only to the President and the Speaker of the parliament. Although it is common practice for the President or the Speaker to disclose the verdicts sent by Parliament to the petitioners and the public through Parliament, a PDF copy of the judgment was circulated on the internet and WhatsApp day before yesterday morning. The Speaker stated the cover of the copy he received had not yet been opened. According to Lanka e News, the verdict was announced by a brother of the President (who is not in Parliament).

The verdict was signed by Chief Justice Jayantha Jayasuriya, Buwaneka Aluvihare, Vijith Malalgoda and Sisira De Abrew but justice Priyantha Jayawardana without signing the verdict added a clause “I agree” below and signed separately. Such a notion is usually stated only if one disagrees with the opinion of the verdict or has a different opinion but Priyantha Jayawardena has written in different words what the other four judges has stated. It is clearly nothing more than an inferior ploy by him to create a different image of himself for the government. Priyantha Jayawardena was a person who was directly appointed as a Supreme Court Judge while working as Basil Rajapaksa's lawyer. Justice Priyantha Jayawardane’s action on the verdict shows that despite the moderate rulings given during the previous good governance government, now he has started to display his true colors afte the return of his previous old masters. He should be considered as a person who is aspiring to be the next Chief Justice. It is not a surprise that he wants the powers given back to his old masters to appoint judges, including the Chief Justice.

Positive aspects of the case..

Lanka e News sought the views of retired judges, President's Counsels and constitutional experts in this regard. The summary of their views is as follows. They are of the view that this verdict shows the lack of foresight of the Supreme Court of Sri Lanka and that the judiciary has not only betrayed its own powers to the executive but have completely subjugated Parliament to the executive. What has been little good has bee done is to say that Article 5 of the Amendment only calls for a referendum on the inviolability of the President's immunity.

Even under President JR's constitution, there was no presidential immunity for complicity committed by the president as a minister. As a minister in a ministry owned by the President, the people could have resorted to the courts for their misbehavior. That is how President Chandrika Kumaratunga was ruled against the Waters Edge complicity.

However the 19th amendment took a step ahead and legislated to take fundamental rights cases against president’s decisions. It was due to that the courts decided the dissolution of the parliament made by president Sirisena was illegal. Gotabhaya's 20th Amendment overturned the status quo of the 19th Amendment and backtracked on the provisions of JR's constitution. Today's Supreme Court ruling calls for a referendum, reaffirming a referendum is needed if such a right of the people is to be revoked.

Constitutional experts see it as the only thing that matters most positively in this case. Gotabaya told a wonderful story in Article 3 of the 20th Amendment. That is, the removal of the most important provisions of Article 33 so far. These include ensuring that the President follow and upholds the Constitution, promotes national reconciliation and integration, facilitating the proper functioning of the Constitutional and Constitutional Institutions, and to hold free and fair electios and referendums on the advice of the Election Commission and to ensure that appropriate conditions are created for the elections. Gotabhaya had removed all those provisions ensuring that the president should not follow atleast the constitution. Gotabhaya also wanted to escape from the responsibility of creating a condusive atmosphere for free ad fair elections. The Supreme Court has ruled that a referendum should be held if such a heinous act is committed.

Under Article 14 of the 20th amendment, Gotabhaya had demanded that the President should have the power to dissolve Parliament one year after it is elected. Prior to that, JR's constitution stated that this could be done after two years. The 19th amendment increased that to four and a half years. Today, the Supreme Court ruled that it should be changed for two and a half years and if not, it should go to a referendum.

Why the Supreme Court did allowed the parliament to be a rubber stamp of the president?

Experts say the Supreme Court ruling that allowed Gotabaya to acuire a two-thirds to do anything other than the above positives, has allowed the executive to usurp the sovereignty of the people. The key is to empower the president to remove the premier. A parliament is selected by the sovereign power of the people. Its prime minister should be the most trusted person in parliament. If anyone can remove him from the post of Prime Minister as long as he has the utmost confidence, isn’t that a violation of the sovereignty of the people? From Gotabhaya's 20th Amendment, the president has taken the power to remove the most confidence person (premier) in parliament. The Supreme Court today ruled that a referendum was unnecessary and that only a two-third of the Parliament is sufficiet. All legal experts who contacted Lanka e News say that this is an opportunity given by the Supreme Court to allow the President to blatantly violate the sovereignty of the people. This would allow the people to lose a democratic parliament. It will simply be a rubber stamp of the President.

Due to the cowardice act of five judges’ blood would flow across motherland …!

The funniest part is that the judges of the Supreme Court and the Court of Appeal are now appointed in a more democratic manner but from this 20th amendment that is reversed and the five judges of the Supreme Court have decided to return the mandate to the President. It appears that these moronic judges are worse than king Sirisangabo. King Siri Sangabo at least cut off his own head and gave it to a poor man, but all these five judges did was hand over the sword to the President to cut off their own heads. From now there will never be an independent judiciary in Sri Lanka after this because the judges appointed by the President give the President the necessary decision.

An expert who spoke to us in this regard said that when Mohan Peiris was the Chief Justice during the last Rajapaksa regime, the latter made all the necessary decisions biased to the Rajapaksa because of his Rajapaksa loyalty. These five judges have ruled to act in this manner is due to the fear of Gotabaya. Cowardice would neither fit for judges nor a peon post. Those judges would be fit to clean female toilets and to wash women stained undergarments.

Future generations will pay for the cowardice of these five. The number of barrels of blood will flow in this motherland.