Corona vaccine would be released for the people with Christmas..! How millions of vaccines are produced ..! 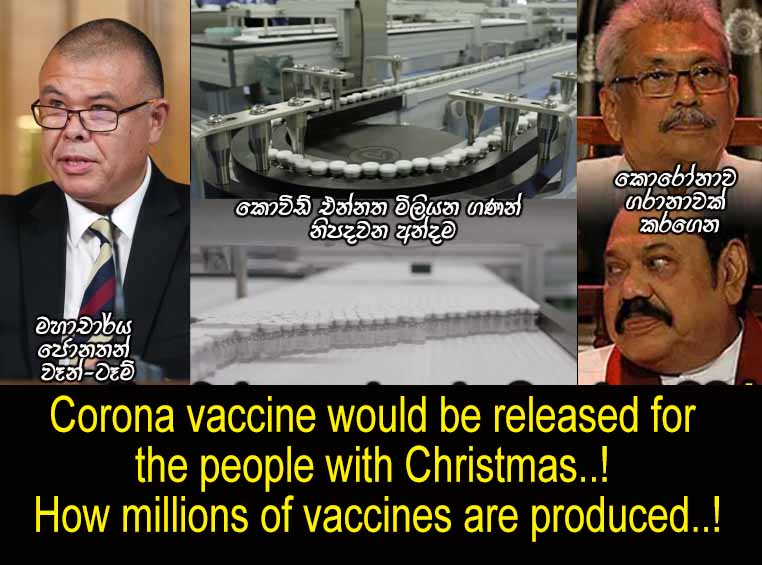 (Lanka-e-News -19.Oct.2020, 11.30PM) Professor Jonathan Van-Tam, Deputy Chief Medical Officer of the National Health Service (NHS-UK), delighting the entire world announced,  the vaccine against the Kovid 19 virus will be available to the public after Christmas.

The professor Addressing Members of Parliament of United Kingdom told that a vaccine against Kovid 19 could be made available to the public by the end of Christmas, and that thousands of NHS staffs are currently being trained to launch a "strong comprehensive program" to save lives from the virus.

Professor Jonathan Van-Tam further said the third phase of the vaccine, which was discovered by the University of Oxford and tested by AstraZeneca, would take as long as December to deliver to the public. (AstraZeneca is a British-Swedish joint venture that specializes in the manufacture of vaccines.)

UK changed its health laws this weekend. This expanded the number of health officials who could provide a vaccine to the public. Under the new regulations, the law will allow new pharmacists, dentists, midwives and paramedics to inject the vaccines to the public.

The first round of vaccinations will be given to the elderly, those in critical condition in the society and for those who are at risk will be given the vaccine later. The vaccine will then be given to everyone. According to the British health authorities, wearing masks and maintaining the distance is only until July 2021.

Hours after the announcement of the NHS Deputy Chief of Staff in UK, released a video footage to the international media of the production of Kovid-19 injection vials at a factory in Puurs city Belgium by Pfizer, another major multinational pharmaceutical company.

Ben Osborne, head of Pfizer's UK, said, It is estimated that 40 million vials will be supplied to the UK. (There seems to be some contradiction between this statement and the statement of the NHS Deputy Chief) Osborne says the Pfizer vaccine requires two doses per person twice.

Pfizer pharmaceutical Company is working with BioNTech in Germany to develop the Kovid-19 vaccine, and has so far conducted 44,000 clinical trials.

When the whole world is producing a vaccine for Corona, the two tribal brothers of Sri Lanka is legislating the the 20th amendment..

Before concluding this report, an important point for the Sri Lankan reader should be emphasized. While all civilized world powers are doing their utmost to bring a vaccine against the Kovid-19 epidemic at this critical juncture, the Sri Lankan tribal Rajapaksa brothers’ government is trying to bring a constitutional amendment that would allow dictatorial powers for the family amid this epidemic.

The Rajapaksa family which is a curse for the whole  country is making the corona epidemic a profit for them just as they did for the tsunami catastrophe. While whole world is expanding the corona treatment centers in their countries Sri Lannka is expanding quarantine centers'.

When the Corona first spread in Britain, the British government which has so many hospitals did not make quarantine centers but deployed the troops in two days and built a 1000-bed hospital with ventilators in a large indoor stadium.

There is no such thing as a quarantine center in any developed countries, such as Italy, the United States, Britain, France, as well as Australia and Canada, where tens of thousands have been infected. People should be quarantined in their homes. If such a person's condition worsens, they are rushed to a hospital for treatment. However, Sri Lanka without expanding the hospitals, create more quarantine centers to rip its citizens pocket. (In previous epidemics inn Sri Lanka such as smallpox, did people not quarantine themselves at home? Did they go to quarantine centers?)

For instance a person who is coming from overseas must obtain a PCR report 72 hours in advance. Upon arrival at the airport, another PCR report is obtained. Even when both are negative, he is sent to a quarantine center. If two PCR is negative, why not send him home and ask him to quarantine himself? He is sent to a government quarantine center and charged Rs. 17,500 per day and for 14 days its 245,000. At one place it is Rs. 12,500 per day and charged 175,000 for two weeks. From all this earnings a commissions go to the Rajapaksa henchmen. There are 70 hotels in Sri Lanka that pay a commission to Corona boss Shavendra Silva. Another hotel is owned by Dilith Jayaweera. Another hotel is owned by Club Wasantha but the IDH hospital that treats the corona still only have five hundred old beds.

The government made people to forget the corona due to the election. They did not increase the PCR tests they were boasting stating "We are the best country to suppress the corona." He unofficially opened the country by saying 'the virus is over' without testing. But the airport was not open unable to rip money from people coming from overseas. The Britain conducted two million PCR tests in the last two days of the weekend before easing its first lockdown. Although such security measures should be taken before opening a country, the Rajapaksas opened Sri Lanka early for the election without following any security measures. Even then, the leaders behaved as if there was no epidemic called corona. The president visited a school with small children, wearing nothing while the children wore masks. Corona rules were just as biased as other laws. His henchmen have no laws. Today, the whole
country is enjoying the result of the government finally allowing Brandix to act as it pleases.

The Rajapaksa would rip from the vaccines also..

As a result of the Rajapaksas turning corona into a profit making business has spread Corona throughout the country. No matter what the government says, the epidemic in Sri Lanka is out of control today. None of the statistics provided by the government in this regard can be accepted. The best example is when the World Health Organization claims that at least one percent of those infected with Kovid 19 die, the Sri Lankan government states although we have 5000 Kovid infections the death toll is only 13. According to the WHO, the minimum death toll in Sri Lanka should be 50 but the Rajapaksas say 13. However outside Sri Lanka, about 75 Sri Lankans have died. The Rajapaksas do not even count those deaths. Either the Rajapaksas are lying or Sri Lanka has a virus other than Kovid-19 found in other parts of the world. Another government should come to know the truth
about the corona epidemic in Sri Lanka. But by then the truth may have been destroyed as well. Statinng false information to the world would cause serious harm to Sri Lanka one day. That is when compensation for this epidemic would materialize.