Defeat the Attempt to hand over the Country’s administration to Dual Citizens; against the people’s will -Deshamanya Karu Jayasuriya 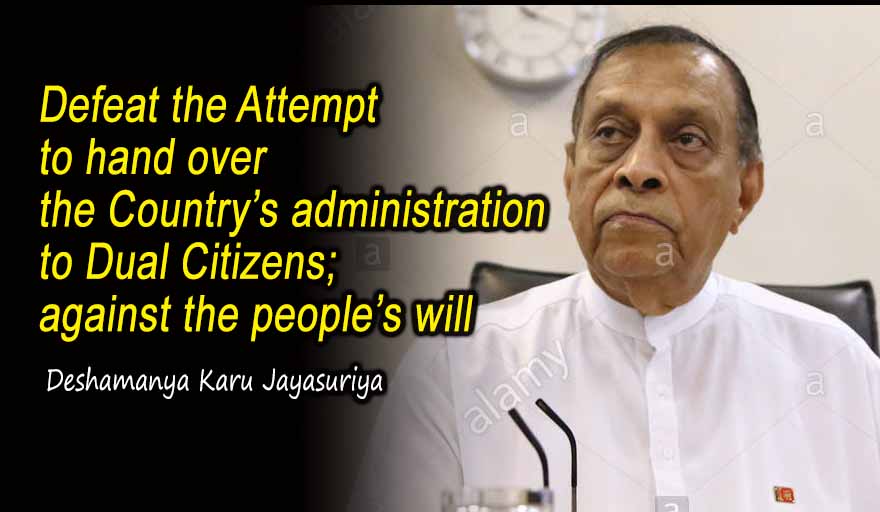 (Lanka-e-News -21.Oct.2020, 9.40PM) The attempt to reform the constitution to make it possible for those holding citizenship in other countries to make law and run the administration in Sri Lanka is deplorable.

No person who is concerned about the security and well-being of the country can agree with such a decision. It is a shameful effort to change the supreme law in the country to suit the whims and fancies of one person or a small group of them. Such disgraceful reforms are a disgrace to the intellect of the 21 million population of Sri Lanka.

National Movement for Social Justice holds this view having considered the statement by Minister of Justice, who held that the clause on the dual citizenship in the proposed 20th Amendment will not be amended at all.

The proposal in the 20th Amendment as confirmed by the statement of the Minister of Justice, allowing those holding foreign citizenship to represent the Parliament and become even a President in Sri Lanka also an insult to those heroes who sacrificed their lives for the integrity of the nation, throughout history, including those national icons such as Wariyapola Sri Sumangla Thero.

In order to understand the danger and the severity of the imprudent decision to allow foreign-citizenship-holders to be appointed to most important positions in the country, one must observe the gravity of the citizenship oaths of some countries. For instance, United States of America requires its naturalized citizens to take the following oath seeking the help of God:

If we delve into this example, the US oath makes it clear that in the event of a US citizen joins the state apparatus in Sri Lanka, they are bound to satisfy the requirements of the United States of America, including ‘bearing arms on behalf of the United States’. The proposed 20th Amendment to the Constitution re-opens the opportunity for foreign manipulations. Further, the disgraceful 20A, by in clause 5(A), proposes to weaken the internal strength of the Constitution by deviously removing the Article 53, that requires the President to ‘ensure that the Constitution is respected and upheld’ as one of the duties.

The 20th Amendment amounts, therefore, to nothing but a shrewd scheme of the government to betray the country and its mandate to foreign nations. We cannot understand how it is not an act of treason.

We, as National Movement for Social Justice, hope that the erudite Buddhist monks and other religious leaders as well as patriotic citizens will pay their serious attention to the developing situation.

Further, we kindly emphasize our request to all Parliamentarians that if they are going to pass the 20th Amendment to the Constitution anyway, they should remove the most harmful clauses of it at the least. However, we hold the view that the government should withdraw the treacherous 20th Amendment and draft, as promised, a new Constitution that protects the independence and sovereignty of Sri Lanka.