Geneva 46th Session of the UN HRC; Will be in favour of any resolution against Sri Lanka 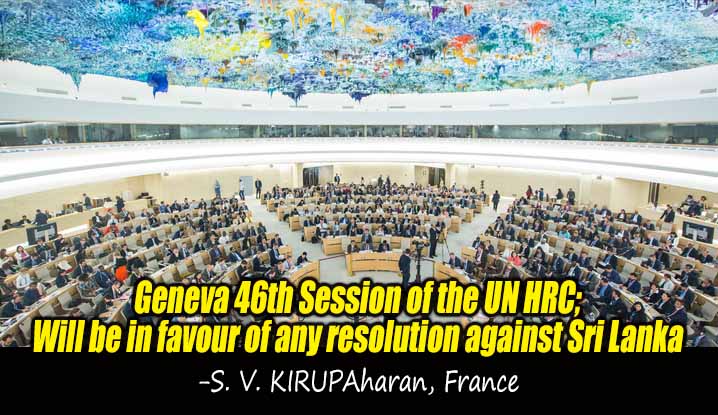 (Lanka-e-News -23.Oct.2020, 10.30PM)  In the UN General Assembly in New York, on 13th October, elections were held for fifteen vacancies for members of the UN Human Rights Council - HRC for the period 2021 to 2023. Some countries with records of gross human rights violations succeeded in this election.

One need to know which countries are presently members of the HRC until December 2020 or beyond. They are:

If any sitting country wants to continue its membership in the UN Human Rights Council, it can only do so for two terms of three consecutive years during each period. In order to do this, at the end of their first three years, they must stand in the elections held by the UN General Assembly.

Now let us look at the fifteen members, elected last week by the UN General Assembly, who will hold their membership for three years from 2021.

Among Asia Pacific countries: Pakistan, Nepal, China and Uzbekistan. But Pakistan and Nepal have been re-elected for their second term.

Among African countries: Senegal, Cote d’Ivoire or Ivory Coast, Gabon and Malawi. But Senegal has been re-elected for its second term.

Among the Latin or South American Caribbean countries: Mexico, Bolivia, Cuba and Mexico. But Mexico has been re-elected for its second term.

Among the Western European and other countries: France and Britain were elected without a vote.

In terms of Eastern Europe: the countries of Ukraine and Russia. But Ukraine has been re-elected for its second term.

Many international human rights organizations condemned the fact that out of the fifteen countries elected this time, many have records of huge violations of human rights. But this is not the first time such countries have been elected to the HRC. This is proof that the UN General Assembly is politicised.

Next, we need to consider that the two-year deadline given by the HRC to the Government of Sri Lanka ends in March 2021 - in other words at the same time as the 46th session of the HRC next March. The question that now arises for many is that how will the member states of the HRC handle the situation in Sri Lanka?

The main thing we need to note is that Sri Lanka has already withdrawn its co-sponsorship from this resolution and since the last Presidential as well as Parliamentary elections, the government has been manipulating ways to bury democracy in Sri Lanka. Also, Sri Lanka is openly collaborating with countries with the worst human rights abuses in the world - such as China, Cuba, Iran, Pakistan and others.

In this context, at the forthcoming session of the HRC, it is inevitable that a tough resolution against Sri Lanka will be put forward. What matters may be how the members of HRC support this resolution. There are people who do not understand the HRC situation and are panicking. Some people are worried that China, Russia, Cuba and Pakistan will be the members of the HRC from 2021 and that they may sabotage the resolution. Of course, they will try their best but they will not succeed. One should understand that all those resolutions in the past were voted successfully while China, Russia, Cuba and Pakistan were members of the HRC.

Some say that earlier resolutions were successfully passed, because they were initiated by the US which is not in the HRC now. There are people finding it difficult to understand the internal affairs, lobbying and voting patterns in the HRC.

The US may not be in the HRC but they are concerned about the situation in Sri Lanka, especially on human rights issues.  When Sri Lanka was given a two-year extension, the US played their cards behind the scene though this was not known by many.

The US tendency to stand down from the HRC was/is always during a Republican Presidency. During the Presidency of Democrats, they openly join the HRC and initiate issues. Considering this factor, in the forthcoming Presidential election in the US, if Democrats win, they will certainly move their activities to the HRC.

The resolution against Sri Lanka, to be submitted to the HRC in the next session will surely win by a vote of at least twenty-five to twenty-seven countries (25-27). Those who would like to analyse this prediction has to consider the votes on the previous resolutions, the membership of the HRC in 2021 and a few other factors that need to be taken into consideration. Also, one has to consider the present political situation in Sri Lanka.

In the meantime, there are people spreading unhelpful venom that, even if the HRC voted to pass the Sri Lankan situation to the UN Security Council, China is there to protect them. I kindly request those people to look at what China did when the Sudanese former President Omar el-Bechir was referred to the International Criminal Court – ICC by the Security Council. It is to be noted that the former Sudanese President was very friendly with China and they were trading a lot.

So, the future resolution on Sri Lanka at the Geneva HRC will be passed without hindrance.

However, for any future resolution on Sri Lanka to succeed at the HRC - the contribution of the Diaspora Tamils, activists, all diaspora organizations, Tamil MPs from the North and East, human rights activists and the missing parents' and relatives from Sri Lanka are very important. All of these should find ways to work alongside International Human Rights Organisations and others.   (End)