Chaoxiang - 'One who waits for the fortune' (a Sri China Story) 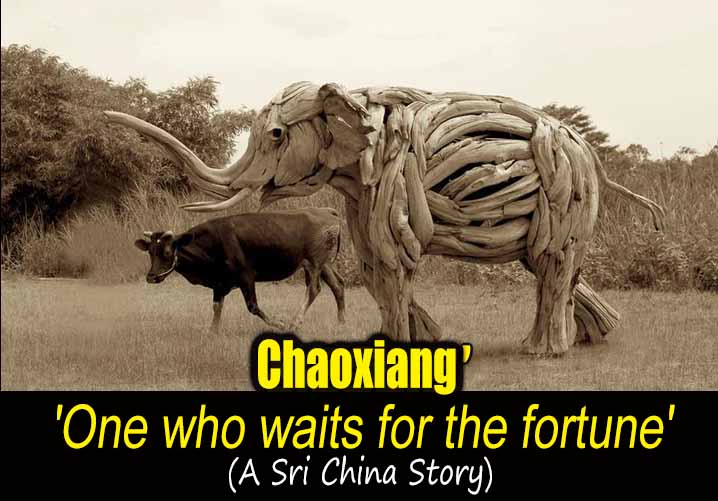 (Lanka-e-News - 26.Oct.2020, 6.00AM) On the night of October 22nd Chaoxiang in Shanghai was overjoyed when the rules were changed to allow Sri Lankan dual citizens to enter parliament. He wondered if his mother knew the future when she named him. The name Chaoxiang means 'one who waits for a fortune'.

Chaoxiang is currently in Shanghai for two years under the Chinese Communist Party. It is for no other reason than to be the first person to receive training as the CEO of Sri Lanka on Chinese properties in Sri Lanka and for the Chinese living in Sri Lanka. He should learn about 100 modules such as Sinhala Tamil language training, training of Sinhala and Tamils songs and the learning of Sinhala Tamil filthy words.

‘Sir, are you going to Hambantota today? Are you leaving tomorrow? ' Asked DIG Chun Tao.

‘Going tomorrow how is the situation there? '

‘It is different there, not like here sir, it is about 15,000 acres, a big port, an oil refinery and lot more.

“I think you have to stay in the official residence there for a long time sir. However, anyway no need to worry as are 50,000 Chinese policemen and 75,000 of our heroic Chinese Marines deployed in Hambantota” Chun Tao said.

“What to be afraid of? Two thirds of the Colombo port is ours. Hambantota is ours. Both the Galle and Trincomalee ports will be sold to us next month. The Indians want they can keep that little harbour in Kankesanthurai” Chaoxiang replied his Chinese DIG.

At the same time, a coordinating secretary of Sri Lankan President Gotabhaya Rajapaksa visited Chaoxiang, He had brought a message from the President. There was a wonderful suggestion in it.

That is, with the attainment of Sri Lankan citizenship, a piece of the Sinhala surname 'Rajasinghe' should be added to the end of Chaoxiangs name.

However, Chaoxianng asked his mother about it and got her approval for the name change

She was glad that her son had received part of the name of the last king of Ceylon.

For about a year since then, 'Chaoxianng Rajasinghe' had a busy schedule. Most of the time, he was bothered by the Sri Lankan TV Channels. He had to spend more time in studios as all the channels asked him to sing Sinhala and Tamil songs. He eventually started a Chinese studio in the Chinese city of Colombo to save time. It was only later that Chaoxiang Rajasinghe realized that the Sinhalese people in Sri Lanka prefer singers who mispronounce Sinhala. It was Musician Rohana Weerasinghe told him why Mohideen Beig and Jikki are still popular in Sri Lanka. After that, Chaoxiang Rajasinghe, who had struggled to pronounce Sinhala correctly, abandoned it and continued to sing Sinhala songs in Chinese pattern. It took him a few months to become a star in Sri Lanka. By the end of 2023, the name 'Chaoxiang Rajasinghe' was as familiar to the people of Sri Lanka as 'Dan Priyasad'.

2024 began with Gotabhaya Rajapakse's plans to run again in the 2025 presidential election. One day in January, Gotabhaya invited Chaoxiang Rajasinghe to dinner to discuss coming Presidential Election. The meal was completely limited to two people. Meanwhile, Gotabhaya Rajapakse came
up with a brilliant proposal to Chaoxianf Rajasinghe. That is, if he is willing sponsor his presidential election campaign, he will take Chaoxiang Rajasinghe to parliament from the national list and nominate him as Prime Minister.

"Now Chamal brother is not in his senses, Mahinda brother is also gone and the alms giving is also over, It has been a year and a half since Basil left for America in anger, Namal is a fool, Therefore, I think it would be better if Mr. Rajasinghe can take over the rest of Sri Lanka and develop as you developed the Chinese properties here. That is why I decided to give you the premiership.''

''And now Mr. Rajasinghe is more popular in Sri Lanka more than me, no body would object.''

''What is your idea?''  Gotabhaya smiled slowly at Chaoxiang Rajasinghe and looked into those small eyes hoping for an answer.

When the legislation changed so that dual citizens of Sri Lanka can be elected to Parliament on October 22nd 2020, rolling in the bed in a small room in Shanghai, what he had thought had now has now materialized.

He wondered if his mother knew all this when he was named "Chooxiang" which means "one who waits for his fortune".

Even more, he wondered if Gotabhaya had legislated the laws for himself.