This is the Statement issued by the Chinese Embassy in Colombo against the US Secretary of State's visit to Sri Lanka, leaving aside diplomatic ethics. 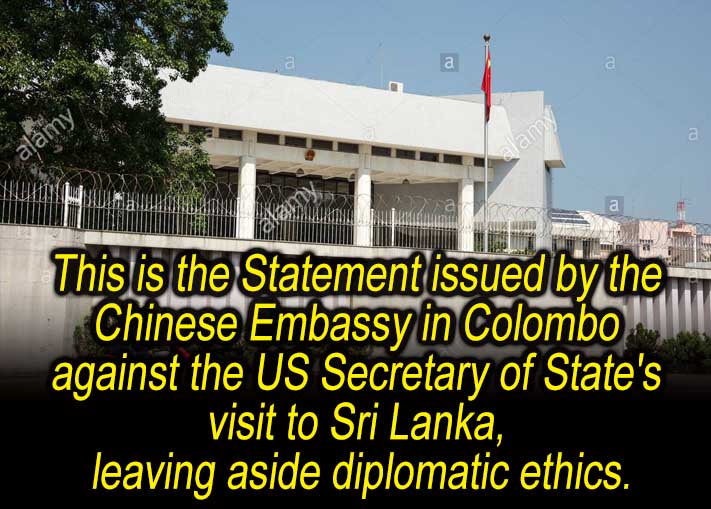 (Lanka-e-News - 28.Oct.2020, 11.00PM) When a friend comes to a person's house, it is a serious offense for others in the house to disrespect the friend. The Chinese Embassy in Colombo had made such a serious mistake by issuing the following statement when the US Secretary of State visited Sri Lanka. Following is that announcement.

On 22nd October, US Principal Deputy Assistant Secretary of State Dean Thompson openly instigated and interfered in China-Sri Lanka relations during a press briefing on Secretary Pompeo's upcoming visit, and even urged Sri Lanka "to make difficult but necessary decisions" on its foreign relations, which is a blatant violation of diplomatic protocols. On the next day, the Spokesperson of Chinese Foreign Ministry has responded strongly and stressed that the remarks of the US official were filled with Cold War mentality and hegemonistic mindset doomed to fail, which fully exposed the consistent US practice of arbitrarily interfering in other countries' domestic and foreign policies and forcing small and medium-sized countries to choose sides.

On local and international media inquiries, the Embassy further solemnly states as follows:

I. The people of China and Sri Lanka have a history of friendly exchanges for nearly two thousand years. We have enough wisdom to handle relations with each other and do not need a third party to dictate. Even before the two countries established diplomatic relations with each other in the 1950s, we broke through the US blockade and sanctions, and signed the historical Rubber-Rice Pact. Today in the 21st century, it is more impossible for the two countries to succumb to the coercion of any external forces. As a sincere friend of the Sri Lankan people, China is happy to see the island developing healthy relations with other countries. However, we are firmly opposed to the United States taking the opportunity of the State Secretary's visit to sow and interfere in China-Sri Lanka relations, and to coerce and bully Sri Lanka. It is hoped that the United States will face up to the just calls of the international community, face up to the popular base of China-Sri Lanka relations, face up to the real needs of the Sri Lankan people, "make difficult but necessary decisions," and correct the ugly practices of arbitrarily interfering in other countries' domestic and foreign affairs.

II. At the same time, we also sincerely advise the United States that true friends should put themselves in the other side's shoes. Currently, Sri Lanka is facing the most severe challenge since the outbreak of COVID-19, and the local health system can no longer bear any imported risks. The United States has sent a large delegation and batches of advance team into Sri Lanka when its own confirmed cases reached 8.8 million and the death toll surpassed 230 thousand, and made various requests for the visit and even for an emergent road construction. The general public are constantly questioning: Does this approach truly prove your respect to the host country? Is it helpful to local epidemic prevention and control? Is it in the interests of the Sri Lankan people?

III. Recently, a high-level Chinese delegation also visited Sri Lanka, bringing much needed assistance and support to Sri Lanka's pandemic fighting and economic reviving. Furthermore, although the pandemic has already been effectively controlled in China, in order to minimize risks and respect the host country, the Chinese delegation still minimized its activities and personnel as much as possible, strictly abide by Sri Lanka's epidemic prevention guidelines, and resolutely avoided any trouble to the host country. We are willing to share these practices with the United States, hoping to provide some reference for Mr. State Secretary's visit and its handling of relations with small and medium-sized countries.