Surrendering Sri Lanka to China and becoming its colony..! 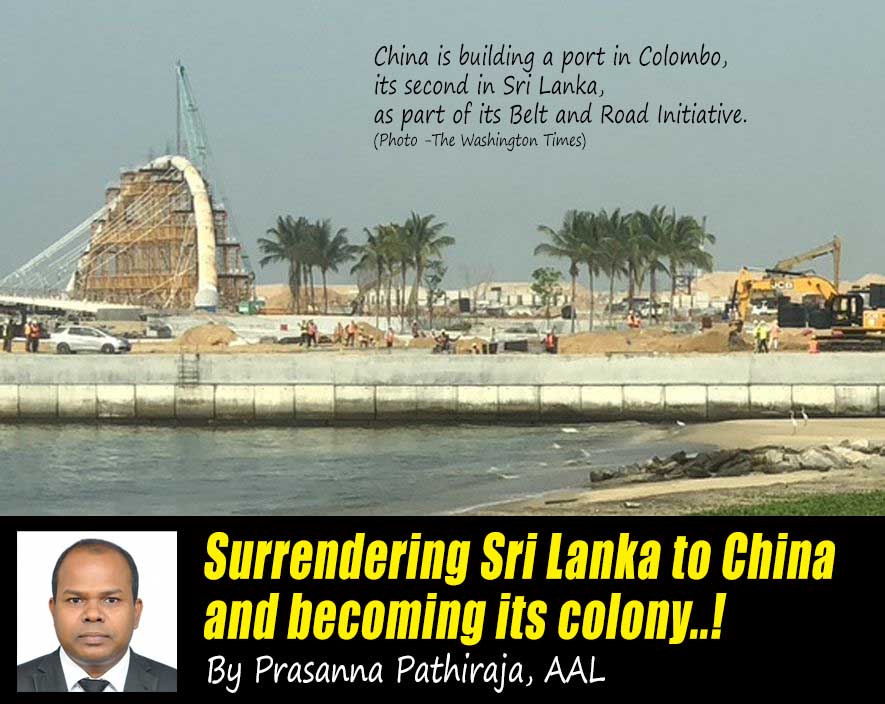 (Lanka-e-News -03.Nov.2020, 11.30PM) This human rights defenders lawyer explains how China deals with the foreign countries as well as with Sri Lanka.

China is criticized globally for luring developing countries to borrow money and then controlling over them. This is being identified by the economists as ‘debt traps’ launched by the China.  Much of the lending is done through the China Development Bank and Export-Import Bank of China.

The Kiel Institute for the World Economy, Germany-based think tank, revealed recently that  China’s debt is “hidden”. The meaning of the ‘hidden’ is that borrowing isn’t reported to or recorded by official institutions such as the International Monetary Fund (IMF) or the World Bank.  The risks related to these ‘Hidden’ debts are the impossibility of tackling debt sustainability in developing economies and impossibility of analyzing countries’ debt burdens. Therefore these hidden borrowings make World’s lending organizations impossible to make recommendations for  borrowers’ strategy that limits the risk of debt distress.  This entire process leaves the borrowers helpless resolving their debt problems.

The other risk factor of the Chinese loan is that China often demands collateral meaning that debt repayments are secured by revenues, such as minerals or oil exports. China inserts collateral clauses into the loan agreements.  Angola, Africa's second-biggest oil producer, repays its $25 billion debt to China with crude oil. This leads the country to sell its oil for a lower rate. Venezuel also faced the same problem related to the barrels of oil. Port's assets are collateral according to the terms of the loan for the Kenyan Railways. So assets are not protected by Kenya's sovereign immunity.

Chinese Government considers Human right as an existing threat. Internally they consider that the Human Rights will shake the authoritarian power of the Chinese Communist party. Abroad, China intentionally let the Human Rights violations to continue to maintain its fast growing economic clout. Its strategy is to harm the internationally accepted Human Rights values. China has no fear about the duress arising internally regarding the Human Rights violations outside the country.  Because Communist Party’s internal totalitarian mechanism is so strong and nobody can challenge it.   Other democratic countries are accountable for what they do abroad and any wrong doing by those lending countries can be challenged internally.

There are many serious environmental issues such as  Souapiti Dam in Guinea and the Lower Sesan II Dam in Cambodia. The standards of the Ameri-Euro and Japanese institutions are maintaining different standards regarding these issues. Those institutions tend to use Human rights profiles and environmental profiles of the borrowing Countries as a criteria for lending rather encouraging to destroy them.

China gives loans to sustain its ambitious China's Belt and Road (CBR).  Simultaneously it seizes assets of the countries that are unable to clear their debts.  China is aiming to become the manufacturing hub of the global economy.  Therefore massive BRI has become the backbone of China's global integration strategy. That’s why China is targeting main economic strategic points all over the world.  China recently used this method to occupy seaports of Kenya.  In December 2017 a Chinese operator occupied Hambantota port to satisfy part of Sri Lanka’s significant debt to China. Kenya is at the risk of losing its control over the Port of Mombasa if it defaults on loans from Exim Bank of China. Djibouti, a small poor North African country, took loans from China to construct the ports and railways that the country desperately needed. But as the price was accelerating, loans were defaulted. The default loans resulted the deprivation of the asserts to the poor nation. By pouring money into Djibouti, China recently provided about US$500-million to build a  756-km railway line between Djibouti and Ethiopia and US$3.5-billion for next 10 years, to invest in the free trade zone covering a vast 48 square kilometers. Public electric company, ZESCO, in  Zambiais at the risk of taking over by the Chinese companies.

China uses strategic debts to gain political leverage from economically vulnerable countries. China owns, as some sources confirm, 70 percent of Kenya’s external debt. China’s “debt diplomacy” has caused severe economic and political sovereignty problems the borrowing countries. China lend Tongo ,a  small island inSouth Pacific Ocean, to rebuild its infrastructures in 2006. The island faced a debt crisis in 2013 but China did not forgive them. The loans claimed 44 percent of Tonga's  GDP. It was great example of Chinese challenge to the sovereignty of poor countries. China intentionally extends its excessive credit to developing and underdeveloped countries. Over the time with the unbearable interest rates and various other facts these countries fail to meet its debt repayment obligation.  Consequently the borrowing countries become economic hostages of China. China is also maintaining a “bribe” system that gives various kinds of incentives to the politicians and officials of the borrowing countries.

China keeps its borrowing countries dependant on Chinese economy. As a result of the repayment schemes borrowing countries have to depend on export and imports on Chinese goods. China became recently Africa’s largest trade partner using the lending process. According to this kind of relationship with China, the other partner has no bargaining powers. The rules regarding fair trade do not exist. Chinese mutual trade value with Africa is 170 billion US dollars in 2018. This value includes ores, crude oil and agricultural products. China by using the debts takes materials from creditors then converts them into finished goods and sells them to the borrowing countries again. The circle made the creditors depend on both ways; exporting materials for cheaper price and buying Chinese goods for their price. The IMF recently estimated that Djibouti’s debt has climbed to 104 per cent of its GDP and the vast majority of this external debt is owed to China.

China shows up with bribes to politicians, government servants as well as the union leaders in exchange for lending projects. Chinese companies are most corrupted among the least transparent according to a study of transparency international. China Communications Construction Co. , one of the BRI's most active companies, was debarred by the World Bank for alleged fraudulent bidding Philippine. Although Chinese companies are blacklisted by the foreign countries, the Chinese institutions are ready to clean them and discharge to the world market again. Once Chinese Ex-Im Bank president said, “If the water is too clear, you don't catch any fish". Chinese construction funds were allegedly used for Mahinda Rajapaksa's failed re-election bid. When dealing with foreign business affairs Chinese politicians do not care about their reputation among the people in China as they are not elected by democratic elections.  As a result of the political and corrupt considerations projects handled and funded by China are poorly choose and therefore do not generate sufficient profit to re pay the loans.

The role in Sri Lanka..

China is using all the strategies that are discussed above in Sri Lanka when they deal with the lending and investment process.

After electing Mr. Rajapaksa as the president of the country,  Sri Lanka was highly criticized for Human Rights violations by the international community . Then as usual China became the main economic, military and political savior that also had a capacity to cover Sri Lanka at the United Nations to block any potential sanctions. This on the other hand infringes the rights of the citizens in Sri Lanka as they cannot get their corrupted politicians before the law for the violations of Human Rights.

Sri Lanka's economy is struggling under the heavy debts and the country is freeing itself from debts by selling Chinese-funded infrastructure projects back to China. China also gets advantage of the institutional weaknesses in Sri Lanka. The country is maintaining very lower level of policy planning and transparency. As a result the performing infrastructure projects funded by Chinese investment turn into unprofitable. The obvious result then is that the country has to struggle with the loan repayment

Subsequent to the discussions with Yang Jiechi, a Chinese Communist Party (CCP) Politburo member and previous China’s foreign minister, China provided 16.5 billion Sri Lankan rupees. It was further reported that during the visit of the Chinese delegation, there were discussions about obtaining more than  $500 million syndicated loan from China. Sri Lankan government has the liberty to use the loan money at their will since the syndicated loans are not designated loans for any specific projects. The money obtained for Hambantota port, Colombo-Katunayake Expressway, and Mattala Airport was unable to use for any other purposes.  Syndicated loan portion of Sri Lanka will increase the up to more than 25 percent of total Chinese debt with the new loans. There will be a necessity for Sri Lankan government to obtain more syndicated loans as the sovereign bond repayments amount to $6.3 billion.

There were allegations that the 2015 election of the Mahinda Rajapakse was funded with $7.6 million  by the  Chinese Port Construction fund.  China’s ambassador, breaking all the diplomatic ethics, used to caddie at the Colombo’s premier golf course to support the election of the  Mahinda Rajapakse in the final months of the election. The location of the Port was economically important to China and they also had global security concerns. Although there is a clause introduced to the agreement with the pressure of the Indian government that prohibits the defense activities in the area without the consent of Sri Lankan government, Sri Lanka cannot do more about it as the country is bound by other loans with the China. Chinese diplomatic practice was highly criticized recently regarding the US States Secretary’s visit to Sri Lanka.

Although India and some other countries refused to lend depending on the feasibility reports China Harbor Engineering Company agreed the loan amount for the Hambantota Port Development Project with the Mahinda Rajapakse Government. The port scheduled to become China’s then. After 2015 with the struggle of repayment Sri Lankan government had to hand over the port together with 15000 acres land for 99 years.

Chinese approach regarding the Human Rights issues was clear when it comes to the matters such as Shavendra Silva’s ban on travelling abroad. US Secretary stated clearly that their position regarding such matters depends on the rule of Law but for China it is just a matter of spreading their power. They will take any side as necessary to their strategies not according to the Human Rights of the people in Sri Lanka.

Sri Lanka is also suffering from the displacement of its local workers by both legal and illegal cheap Chinese labor. Chinese government prefers to use their own labor for the projects conducted by them. This labor does not include only the top-trained professionals but also the general workers and helpers. For example, The Port City Project, one of the main Chinese Investment projects in Sri Lanka, employs 22% of Chinese workers. Hambantota Port employed 4% of Chinese labor. It was reported that there were severe impacts the fishermen in Sri Lanka due to the Port City project.  These numbers are alarming to the Sri Lankan labor market as the country is struggling with unemployment.  Not only the labor, Capital goods and intermediate goods for the infrastructure projects conducted by China are   imported from China. Sri Lanka has no alternative to look for cheaper or quality materials when the projects are conducted by the China.

There are concerns that Chinese investment has led to environmental damages. They have no accountability whatsoever regarding these environment matters.   Sri Lanka is maintaining legal and administrative standard in terms of environment impacts resulting from the investment projects. The port City was widely criticized for initiating without the Environmental Impact Assessment (EIA) which is required by the prevailing legislations in the country.  It was criticized for lacking specificity and transparency. There was also no due consideration of project alternatives.

With the accumulation of unlimited power to the presidency by the 20th amendment, Sri Lanka is in real danger of becoming a victim of China as the power of the parliament was significantly limited.