It is not a crime to bribe voters with public money ..! Future elections i catastrophe ..! Lalith Anusha acquitted of the sil cloth distribution case 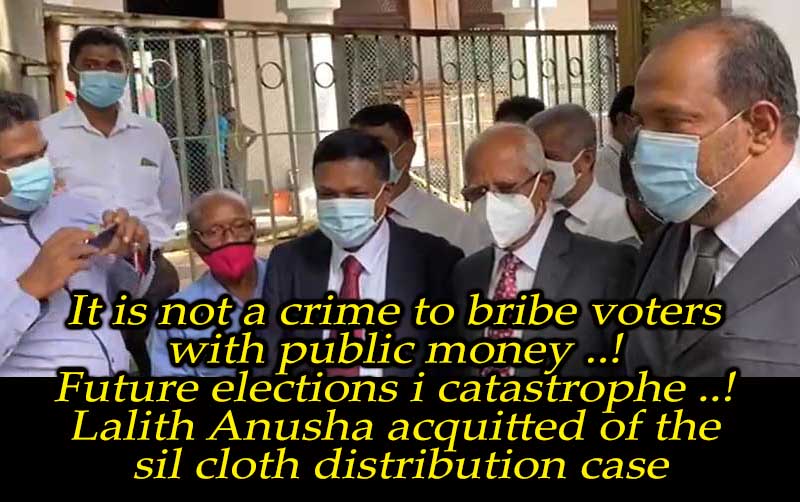 (Lanka-e-News - 20.Nov.2020,11.30PM) Sri Lanka judiciary gave an improbable verdict which completely destroyed the holding of free ad fair elections in future who it ruled out there is nothing wrong in giving bribe for voters on public money. The judgement was given by the appeal court bench comprising judges Kumuduni Wickramasigghe and Devika Abeyrathe.

This case is an appellate decision in the distribution of the Sil cloth case during the 2015 election the whole world was waiting for. Announcing the verdict, the Court of Appeal acquitted Lalith Weeratunga, the former Secretary to the President, and Anusha Pelpita,the former Director General of the Telecommunications Regulatory Commission, who were convicted in the Sil fabric case and released on bail.

Lalith and Anusha were sentenced to three years in prison each for embezzling Rs. 600 million benefiting the former president Mahinnda Rajapaksa for distributing sil cloths for 77,000 voters through 11,000 temples five meter each. Lalith and Anusha were both convicted and sentenced to three years imprisonment and fined Rs. 10 million by the high Court Judge Gihan Kulathunge.

In today's Court of Appeal judgment, Kumudini Wickremasinghe and Devika Abeyratne acquitted and released the accused, declaring that it is nothing wrong with using such public funds to bribe voters in future elections as well.

This is a verdict that will embarrass even the King of Kekille because even the Chairman of the Election Commission had given evidence against these two in this case.

Gotabhaya had appointed Judge Kumudini Wickramasinghe as a Supreme Court Judge and she dragged her appointment in the Court of Appeal to pronounce the verdict and then go to the Supreme Court.

However the law was not enforced equally to Lalith Weeratunga and Anusha Pelpita in this case which was filed against one of the highest public servants in the history of Sri Lanka. In case of misappropriation of public funds, a preliminary hearing should be held in a Magistrate's Court and the suspects should be arrested, but they were not arrested and the charges were filed directly in the High Court. They were granted bail for the first time in the high court. Even after the landmark judgment of High Court Judge Gihan Kulatunga, they were imprisoned for a short period of about two months. Subsequently the law was fast forwarded and an appeal was heard. They were immediately released on bail.

An independent observer of the Sri Lankan judiciary from the outside will see that court decisions in Sri Laka vary according to the government in power. Lalith and Anushala who were guilty during the good governance regime are acquitted during the Rajapaksa regime. Judges should be ashamed of this despicable situation. The dignity of an institution should be protected not by outsiders but by those in the judiciary. As far as we know, the Attorney General has the power to go to the Supreme Court against the decision of the Court of Appeal, but that will not happen.

Reports reaching us confirm that Lalith Weeratunga, who was acquitted and released, is to be appointed the Sri Lanka's High Commissioner to Australia. Following the 20th amendment, no judge in the Higher Courts of Sri Lanka lost their independence and it is certain that such hasty decisions will be the norms in the future.

However, this ruling will have a direct impact on the country's electoral process. Thus, expecting a fair election in the future will be a dream. Another similar decision was taken by the President recently. That is the appointment of Attorney-at-Law Nimal Punchihewa to the post of Chairman of the Election Commission. Nimal Punchihewa is a well known Rajapaksa fanatic. He was the Chairman of the Land Reforms Commission during the Mahinda era, where he distributed valuable government lands to almost every Rajapaksa stalwarts. The most notable of these was the handing over of 40 acres of government land to chef who was at Mahinda Rajapaksa's house.

If this is the case how would be the coming elections in Sri Lanka.