No other country has shot Covid victims..! Do not think that the silence of the people is cowardice..! -Karu 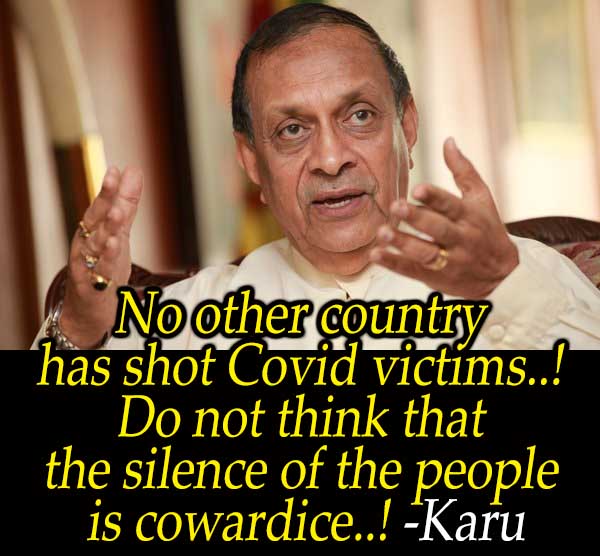 (Lanka-e-News -03.Dec.2020, 12.30PM) Deshamandya Karu Jayasuriya, chairman of the National Movement for a Just Society, warned the government not to insult the intelligence of the people and not to mistake the silence of the people as cowardice as the government has shot the Covid victims. This was stated at a media briefing held at the Janaki Hotel in Colombo today. Speaking further Karu Jayasuriya said,

As the COVID-19 pandemic rages on, the whole society is under immense pressure today. The situation is deteriorating, especially in Colombo and in the Western Province. The country and her people are helpless. A top government official leading the efforts to control the pandemic says that the entire island has become a high-risk zone.

COVID-19 has no race or religion. It has no political bias. Therefore, every citizen is nervous and frightened.

The National Movement for a Just Society has conducted a lengthy study of these issues in the past few days. We believe that the time has come for everyone in the country to recall the past.

Were the decisions that were taken initially correct? Did we rush things? Did we use race, religion and even places of worship to deceive the people of this country? Did the government, the opposition and civil society make the correct decisions? Were we cheated or led to be deceived. We feel that it is very important to put these things into perspective and question ourselves.

The government requested for sweeping powers in order to serve the people better and received a two-thirds majority for that purpose. The people gave that mandate. They wanted more and were given unprecedented powers through the 20th Amendment.

We have never seen such a powerful presidency in the world except for a few countries with authoritarian regimes in Africa. Has the government been able to meet the needs of the people despite possessing so much power?

Rice is not available today at government stipulated prices. Many essential commodities such as coconuts, sugar, dhal, onions and turmeric are not available. So what is the use of these sweeping powers? As citizens, we need to find answers for this question.

There have been no recorded instances in the country's history where control prices gazetted by the government have been blatantly violated. This is a dangerous trend as well as a serious insult to the government.

Sri Lanka has reached a critical juncture now. It is the duty of the government, the opposition and the society to protect the people.

We have hope every time we read about a potential new vaccine for COVID-19.  It has been reported that a number of countries and pharmaceutical companies are working to find a vaccine. However, even for the people who reside in the country where the vaccines are made, it will only be made available to them from the middle of this month. At the same time, we will have to overcome various challenges to obtain these vaccines, especially for developing countries like ours. The World Health Organization too (WHO) has noted this.

At the same time, we need to focus our attention on some important considerations. Do we have a plan on how to distribute the vaccine to the people across the country immediately if it is made available by April? Has anyone at least thought about it?

Have we at least discussed this with the World Health Organization?

At a time when all countries have increased their funding for the health sector, Sri Lanka has slashed funding amidst a pandemic. It is indeed extremely unfortunate that Sri Lanka, as a country that is still fighting a pandemic with no end in sight, is paying less attention to our health sector in this way.

At the same time, the government must ensure that the daily lives of the people in this country, which have been severely affected by the COVID-19 pandemic, continues unabated.

The government should empathize with those who cannot afford to pay for the funerals of victims of COVID-19. Further, the government needs to be more compassionate and pay attention to communities and social groups that are distressed and frightened by the rapid spread of the pandemic.

The tragic incident recently at the Mahara Prison is one such example. Today we hear that the coronavirus is spreading rapidly in prisons.

Accordingly, we need to pay more attention to practical solutions that can be used to reduce overcrowding in prisons while focusing on the welfare of inmates.

None of the problems can be solved by shooting or committing murder. It has been revealed that many prisoners, who were injured by the unfortunate incident that transpired at the Mahara Prison, have contracted COVID-19.

What does this show? Have you ever heard of another country that sought solutions after shooting people who have contracted COVID-19?

On the other hand, we need to pay more attention to the concerns of the general public.

Although the government touted a 'one country, one law' policy, the politician responsible for the destruction of the royal court of King Buwanekabahu is still at large.

Another politician who publicly proclaimed that he will not permit anyone to touch a 'single hair' of the person responsible for the destruction of the royal court challenged the country's rule of law.

What was clearly validated by that single incident? That the rule of law has been rendered helpless similar to the plight of the people?

It is with good intentions that the National Movement for a Just Society presents these facts but with great pain. It is true that the people of this country have become silent witnesses. But I urge the government not to misconstrue that silence as a sign of cowardice. These incidents are a disgrace to the intellect of our citizens.

We believe that the government will take note of the issues raised here and take necessary action on behalf of the country. We must also be mindful of the fact that people are aware of what is happening in the country.