Reveal the truth..! Commission investigating Easter attack has 13 most important questions to answer..! 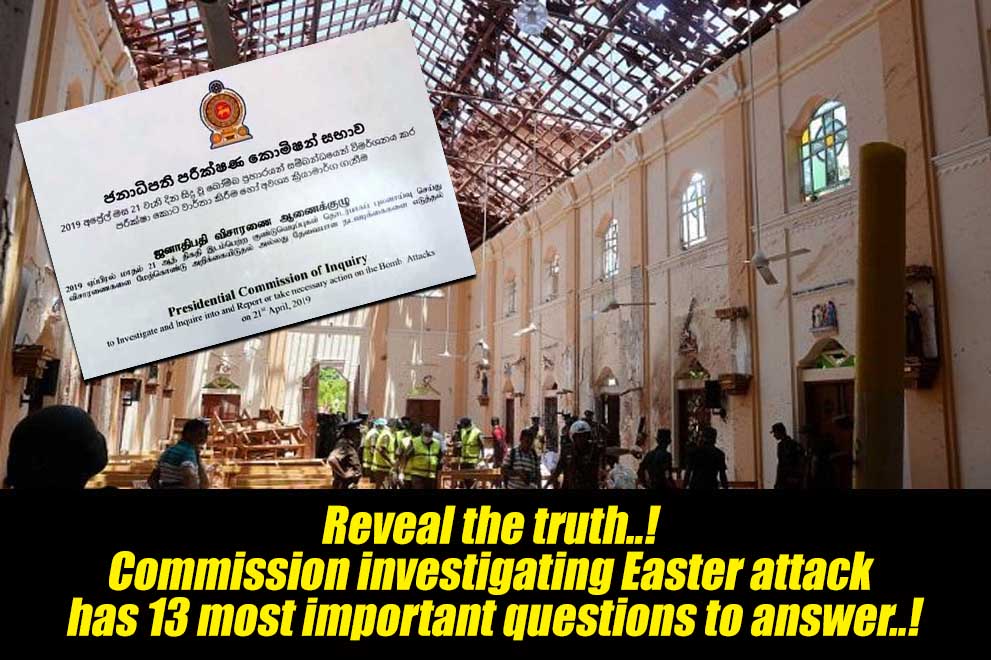 (Lanka-e-News -03.Dec.2020, 12.40PM) The Presidential Commission of Inquiry into the suicide attack on several tourist hotels, including Catholic churches in Sri Lanka, on Easter Sunday, April 21, 2019, is examining evidence from various parties and individuals in connection with the attacks.

According to media reports, the investigation is nearing completion.

More than 300 innocent unarmed civilians, including Sri Lankan Catholics as well as foreign tourists, were killed and more than 500 were seriously injured in the attack. As a result of this attack, the vast majority of Sri Lankans raised serious doubts about the national security provided to the country by the previous government led by President Maithripala Sirisena and premier Ranil Wickremesinghe.

With the defeat of the 2015 presidential election, the story of Mahinda Rajapaksa going from village to village and temple to temple on a daily basis saying that national security was weak was at the same time triumphantly confirmed. It was a disguised blessing for the Rajapaksas to regain power.

In fact, the attack was a powerful factor in the transfer of power in the country, and President Gotabhaya Rajapaksa and others linked to the current government have so far failed to take any further action to punish perpetrators responsible for the Easter attack and end extremism as promised to the country.

Cardinal Malcolm Ranjith, the leader of the Catholic Church, and many other organizations have made a number of statements and campaigns demanding justice during the last presidential election.

Based on the evidence and other media reports that have been uncovered so far in the Presidential Commission on the Easter Attack, the people need impartial answers to the following questions in order to bring justice to the dead and wounded.

1.      Why the Ministry of Defense paying salaries to extremist organizations including Saharan between 2010 and 2014?

2.      How did the terrorists, including Saharan, acquire technical knowledge and training to manufacture suicide bombs?

3.      The IGP Pujith Jayasundara mentioned at the Commission that the assailant who detonated the bomb at a lodge in Dehiwala had met the intelligence officer before the explosion. Why this is not investigated?

4.      Why did former President Maithripala Sirisena, who acted as the Commander-in-Chief knowing the attack before, make an emergency visit to Singapore with his family without any prior notice? (Former Defense Secretary Hemasiri Fernando told the Commission that he had gone abroad knowing in advance about the attack)

5.      Why it became difficult to contact the former President Maithripala Sirisena over the phone after the attack? Why did he not return to Sri Lanka immediately?

6.      Why did Maithripala Sirisena instruct the Defense Secretary and the Commanders of the three Armed Forces, including the Chief of Defense Staff, not to attend the emergency meeting convened by former Prime Minister Ranil Wickremesinghe to control the state of emergency in the country?

7.      Why was Nalaka Silva, the then DIG of the Terrorism Investigation Division, who had been investigating Saharan for a long time, imprisoned? Why did this Commission diid not ask him further questions?

8.      Why did the investigation into a conspiracy to assassinate Maithripala and Gotabhaya Rajapaksa, created by a man named Namal Kumara, end with the Easter attack?

9.      Why did the Muslim Service of the Sri Lanka Broadcasting Corporation from 2012 to 2019 not carry out any investigation into the live sermons of extremist organizations including Saharan which were broadcast using state media waves? Who provided advice and financial assistance for those programs?

10.     Why was Saharan's wife not allowed to report to the media any of the statements made to this Presidential Commission?

11.     Who ordered the immediate release of the suspects involved in the attack on a Buddha statue in Mawanella?

12.     Why was no proper investigation carried out on the high explosives found at Wanathawillu?

13.     Why did former President Maithripala Sirisena, who was deeply opposed and disgusted the Rajapaksa regime, appointed as the Chairman of the UPFA during the last Presidential Election?

Only if the above questions are answered, the truth be known to all, including the relatives of those killed and injured in that horrific attack, and the remaining perpetrators be punished.

From a special correspondent