The dangers facing Tamils in Sri Lanka can be overcome..! 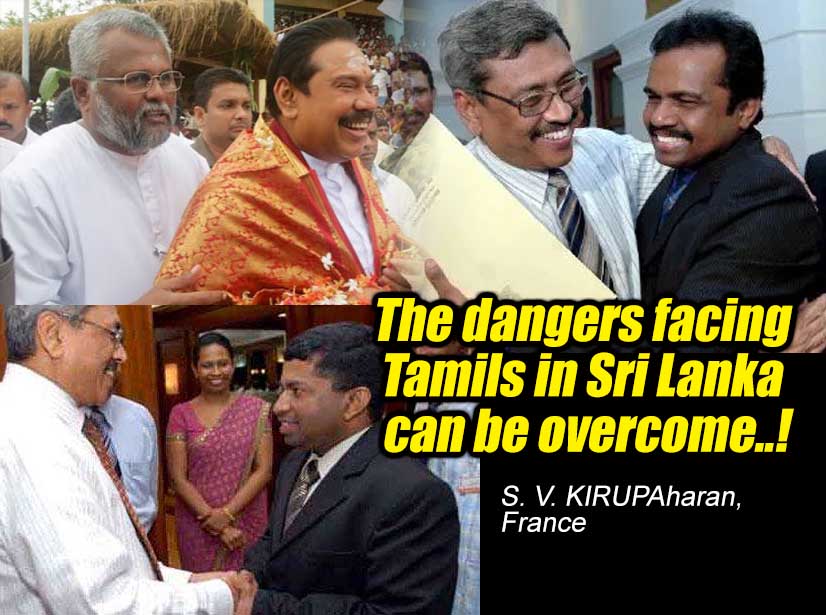 (Lanka-e-News 05.Dec.2020, 5.15PM) Ever since the independence of then Ceylon from the British in 1948, the people of Tamil Eelam, whose homeland is the North East, have never succeeded in winning their political rights.

No one can deny that the armed struggle waged by the Liberation Tigers of Tamil Eelam (LTTE) maintained a de-facto state for more than two decades. It freed the people of the North and East from the oppression of the Sinhala Buddhist state, allowing Tamils to enjoy freedom for more than twenty years.

International organizations and VIPs around the world have acknowledged that while the LTTE was running the de-facto state, Sri Lankan governments could not successfully achieve their four pillars – Buddhisation, Singhalisation, Militarisation and Colonisation in the North and East.

But the Sri Lankan government's utter lies and deception enabled it to crush the de-facto state with the help of the international community. This reversed the fortune of the people of the North and East and inflicted panic. Currently there is a daily routine of arrests, detention, torture and killings. Their historical land and properties are being colonised every day and week. We are witnessing the loss of the homeland of the Tamils, to the Sinhala Buddhist state.

Nothing can be achieved by ten or twelve Tamil Members of Parliament in the current situation. The only advantage is that they can use Parliament for their platform speeches. But even then we do not know how many Singhalese MPs listen. If Tamil aspirations could be met by the Sri Lankan parliament, this would have happened long ago. We do not have to wait another seven decades for anything to be won in the Parliament of Sri Lanka.

Therefore, we must analyse, plan and act in a pragmatic manner. The truth is that every minute we ignore the present political situation in the North and East, we pave the path for more aggressive acts. Some people are, of course, indirectly supporting the agenda of the Sri Lankan government.

Following the independence of the island of Sri Lanka, Tamil traitors have been making money and gaining materially in the name of the political rights of the Tamils. The people in the Tamil homeland cannot expect any political initiatives from traitors like Douglas, Karuna, Pillyan and others.

There are Tamil politicians who don’t trust parliament but spend millions to become members of parliament! There are so-called Tamil activists and individuals who do not seriously care about the political rights of the Tamils. The list goes on, including local Tamil politicians, MPs and activists. It’s almost the same among the diaspora.

Due to the lack of courageous initiatives by genuine Tamil politicians and Parliamentarians, the Tamil homeland of the North East is being successfully subjugated to Buddhisation, Singhalisation, Militarisation and Colonisation.

Today, who really feels the plight of the Tamils and wants to sacrifice themselves? The path that some politicians, activists and a few individuals are taking to gain a political solution will cause more destruction and no proper solution.

The forthcoming new constitutional amendment will never lead to a solution that meets the Tamil’s aspiration. On the contrary! If there are any Tamils apart from the traitors, expecting a political solution from the forthcoming constitution, they are building castles in the air.

We must think deeply and act wisely on our path to political rights, to justice for the victims of human rights violations and humanitarian disaster caused by aggressive governments. We will have to bear in mind that every mistake that we make now, will cause more destruction in the future to our kith and kin in our homeland. The people’s rights can only be won by the people’s struggle. The world has taught us many lessons and there are many examples of this.

How many Eelam Tamils know in detail about the Iranian revolution that took place in Iran in 1978? It was carried out and won, as an Islamic Revolution, instead of using the terms satyagraha or nonviolent resistance.

I am very proud to say that, I am one of the few foreigners who witnessed this revolution in Iran. During that period, I was working in the capital Tehran, in one of the most popular publishing houses. It produced news paper and magazines in Farsi, Arabic, English and French. Working there, I had the opportunity to learn about aspects of the People's Revolution in Iran. I am proud to say that this company still continues to serve the Iranians.

To summarize this revolution, the Iranians bravely came onto the streets and demonstrated while the Iranian Army and other security forces were patrolling the streets with modern arms. They came without any guarantee for their lives.

What can we do?

In this light, my question to the Eelam Tamils who show bravery behind the scenes - are they ready to come forward to do something like the Iranian People's Revolution? While the Iranians were boiling against the monarchy for many years, Iranian politicians at that time rubbed solders with the monarchy, similar to how the Tamil National Alliance – TNA did with the ‘so-called’ good governance of Sirisena and Ranil.

The people of Iran who could not agree with the politicians gradually started their unarmed revolution. As it reached the peak, the Islamic clergy, a few politicians and University students played their part in making the revolution successful.  At the same time, Iranians who sought political asylum in foreign countries also helped.

Also we must initiate our approach towards India, US and the European Union at our earliest. Not just holding rallies and sending petitions – we should start public meetings, hartal, civil disobedience (non-cooperation) against the government. It is the only way; once again we reach out and alert the international community.

Delaying this approach by days, weeks and months – will mean that the new constitution would be implemented with its various hypocritical amendments. These further enforce Sri Lanka as a Sinhala-Buddhist state, asserting that the only ethnic group that exists in Sri Lanka is Sinhala Buddhists. On the basis of being ‘Sri Lankan’, anyone is entitled to live, settle, work, farming, fishing, etc in any part of Sri Lanka.

After this anti-Tamil constitution has been put into action, there is no point in demonstrating, holding meetings locally and internationally. There would not be any use pasting posters or writing appeals to anyone of choice in foreign countries. If anyone wishes to do this, they must act before the new constitution comes into action.

Consider the repression imposed already by the Gotabhaya government: - the traditional observance of Thilipan’s Memorial Day has been denied; land is given to the landless in a very hypocritical manner as a tactic to enable Sinhala youth to legally settle in the North and East; the ban on celebration of Tamils’ Heroes' day, November 27. We all know the background and the motive behind the Buddhist ‘research studies’ in the East conducted by a team consisting only of Sinhala Buddhist individuals.

The Tamils who assisted Sri Lanka Buddhist Sinhala operations against the LTTE are today made valueless by the same people and the government who used them for victory against the LTTE. So while it is true that the Sinhala nation is domineering, are we going to trust everyone who colludes with the hypocritical agenda of the Sri Lankan government? It is a day-dream that the people of The North and East will get any benefits or a political solution from Sinhala-Buddhist Sri Lanka!

Therefore we should act right away. A Tamil proverb says that ​​"the dam should be built before the flood comes". During the struggle, those who wasted their time ignoring the armed struggle by the LTTE, eventually came forward to protest on the streets, but only during the final stage. It was a useless waste of time and energy.

We must plan and take our work forward with maturity and diplomacy. At the same time, we must not fall prey to the hypocrisy of the Sri Lankan government's intelligence services. There are two recent good examples. One is,   soon after the first stage of the court verdict regarding the ban on LTTE in UK, the use of the LTTE’s logo on number plates of vehicles in UK. In fact, this was started by the Sri Lankan Intelligence Service in UK. Another is the writing of letters and sending reports to Mrs. Kamala Harris, vice President of US. Many are still unaware that the Sri Lankan intelligence agencies consistently work to confuse the political progress of the people of The North and East locally and abroad. (End)