Attorney General Dappula and Solicitor General have inflicted corona to the highest echelons of the judiciary in the country including the Minister of Justice, the Chief Justice and judges..! 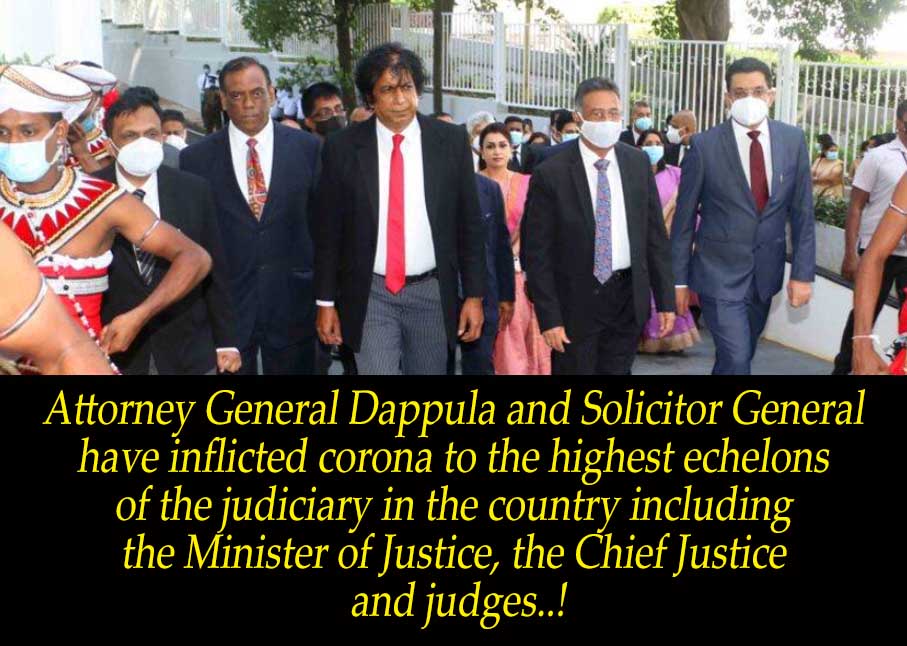 The pandemic was brought to Colombo by opening a circuit bungalow..

The incident started when the Attorney General and his entourage left Colombo to open a circuit bungalow in Vavuniya without following the quarantine rules. It is not necessary for the Head of Department to attend an opening of a remote circuit bungalow. Especially when there is an epidemic in the country, it is an unnecessary act. However, not only the Attorney General Dappula but also his second Acting Solicitor General Sanjaya Rajaratne and the Additional Solicitor General Sumathi Dharmawardena too had gone to Vavuniya from Colombo with their entourage for the opening ceremony held in Vavuniya on the 10th. Following the function the entourage has spent a large time together. Unfortunately, Lafir, the Vavuniya Attorney General's Department official who played a key role organizing the event had a Kovid-19 positive. His second PCR test was also positive and he was referred to a quarantine center on 17th. Several police officers who attended the event in Vavuniya on the 10th also received positive reports.

The results of Laffer's first PCR report came on the 14th, but he had been on duty for about a week before, with fever, cough and with corona symptoms. He had contracted the virus when he attended the opening on the 10th. Accordingly Dappula, Sanjaya and Sumathi should still be at the helm of the Attorney General's quarantine or self-quarantine. However nothing as such as happened so far.

On the other hand, the worst case scenario is that Attorney General Dappula never wears a face mask. This was evident when the Supreme Court caught fire recently. Almost everyone except him wore masks, but Dappula did not wear masks. It has become his policy.

Although it is essential to maintain the distance to protect oneself from the virus, however no meetings are convened by the government of Sri Lanka maintaining the distance. Not only Dappula but the other two were not wearing masks during the function held in Vavuniya.

The new building opening took corona to the high echelons..

The group including Dappula who were unaware that Lafir in Vavuniya was infected with corona till the 14th attended the opening ceremony of the new building of the Attorney General's Department on the 15th of this month with the participation of about 200 people including Justice Minister Ali Sabri, Secretary to the Ministry Priyantha Mayadunne, Chief Justice Jayantha Jayasuriya, all Justices of the Supreme Court, all Judges of the Court of Appeal and all senior officials of the Attorney General's Department. Here is a picture where the Attorney General Dappula is seen without wearing a face mask. Following him is his girlfriend Nirasha Jayaratne not wearing a mask. The ceremony held on the 15th was not held in accordance with quarantine rules.

Accordingly the first and second contacts of a Covid infected person, with the aforesaid Minister of Justice, the Secretary, the Attorney General, the Chief Justice, the Judges of the Supreme Court and the Court of Appeal should all be in quarantine or self-quarantine has not yet been implemented. Everyone is hiding the incident.

No quarantine laws for high echelons..

Gotabaya government messed up the corona by the non-implementation of quarantine laws to the high echelons. It will not be a surprise the next bunch of corona will start with the courts and the attorney generals office. However we all can hear how Ajith Rohana would flatter another misleading story.

It doesn't matter if the kangaroo court and the weed laws clear the whole judiciary and the legal system of the country infected with corona, but such 'sanctifications' do not occur with the corona epidemic.