The plaintiff who did not grant bail to Shani is a boozing pal of Vass Gunawardena..! Nimal Ranaweera corrupt judge revealed..! 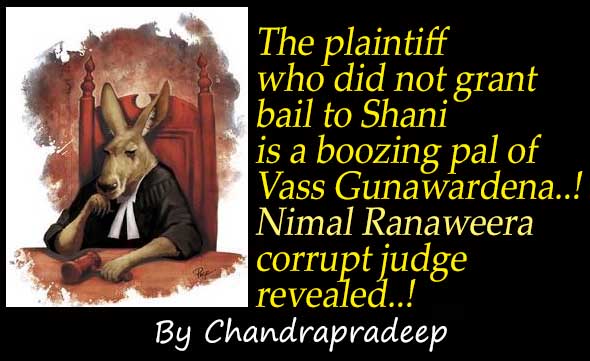 (Lanka-e-News - 20.Dec.2020, 11.30PM) On the 9th of December Gampaha high court judge Nimal Ranaweera rejected the bail application filed by the former director of CID Shani Abeysekara who was remaded unjustly, and the sub inspector Sugath Mendis who refused to give false evidence against Shani and uphelded their remand custody. The legal community is amazed and the law abiding community is angry over Nimal Ranaweera's decision which completely disregard the existing law in Sri Lanka.

Nimal Ranaweera said that the verdict would be given on the 7th but the verdict was given on the 9th as he took a leave on the 7th. Meanwhile, on the 7th the Attorney General had submitted a medical report on Shani Abeysekera to the plaintiff Ranaweera.  It said nothing else but Shani was currently infected from Kovid-19 and he had suffered a heart attack in the meantime. According to the medical report, Shani Abeysekera has been receiving clinical treatment as a heart patient for a long time. In a bail case, submitting a medical report by the Attorney General is allowing the judge to grant bail by considerin the medical facts because a heart patient with a minor offence will not be remanded.

Crimes alleged against Shani Abeysekara are accused of absurdity. He is alleged for influencing the witnesses of the case of former DIG Vass Gunawardena and his son who is currently on gallows for the killing of businessmen Shyam's. During the search of Vass Gunawardena's house, firearms including the T-56 firearm used for Shiam's murder were found and the officers who carried out the raid had reported the matter to the court under Section 127 of the Penal Code. The officers testified at the trial and the evidence was not challenged in both appeals. Surprisingly, Shani is now accused of influencing witnesses after Gotabhaya's arrival, despite no statement of influencing witnesses in the High Court, the Court of Appeal or the Supreme Court.

It is a planetary record that the Sri Lankan Rajapaksa CCD (Colombo crimes division) has leveled absurd allegations against Shani at a time when the entire world agrees that the police cannot question a retrial after a Court of Appeal decision. The CCD, on the other hand, has filed charges under the Firearms Act. That is to say, the firearms found were in the possession of Shani. However, not a single firearm has been produced in court against Shani. This is the first and only case in the world where a man has been arrested and remanded on charges under the Firearms Act without a firearm. Nimal Ranaweera will go down in the Guinness Book of Records as the only plaintiff who did not grant bail to an accused in such an occult case.

Only the babies born yesterday and this sordid judge Nimal Ranaweera who denied bail are unaware that the Rajapaksas are taking revenge on Shani following their return by doing all these illegal conspiracies not due to anything else, but Shani carried out investigations into the Rajapaksas in strict compliance with the law.

Who is the judge Nimal Ranaweera who gave the above illegal verdict in such a pathetic situation? Why did he make such a bestial decision? Everything has been revealed when Lanka e News Judicial inside Service investigated the facts.

Nimal Ranaweera is a bosom boozing pal of Vas Gunawardene..

Prior to becoming the Deputy Inspector General of Police, Vass Gunawardena served as a Senior Superintendent of Police in Kurunegala. Nimal Ranaweera was also a Kurunegala District Judge at that time. The two got to know each other in Kurunegala. The two later became close friends. They often meet, eat and drink and sometimes join families to their favorite parties.

The case was heard to help a friend..

Shani is seeking bail from such a thief judge in a case that was fabricated to release Vas Gunawardena and imprison Shani Abeysekera. If plaintiff Nimal Ranaweera is a righteous judge, he should have withdrawn from Shani's case without hearing as there is a conflict of interest. Sordid judge Ranaweera surreptitiously sat on the bench with the intention of helping his friend and not bailing out Shani. That's why even the attorney general's medical report too was thrown in the trash. We do not know whether the police officers who knew the connection between this judge and Vass Gunawardena informed Shani's lawyers about this. If the lawyers had known that, Nimal Ranaweera would have had the opportunity to oppose the trial at the outset. But unfortunately that did not happen.

This Nimal Ranaweera is a man not at all fit to become a judge. In no other country has such a judge been able to come this far. We say this because there have been reports of abuse during his tenure as a magistrate. Such a major event is as follows.

Nimal Ranaweera was a person who committed such abuses when he started his career as a judge.

There are evidences that he was impartial when he was acting as the Polonnaruwa High Court Judge. One of the main cases is the case of the death of 'Weli Raju', a younger brother of former President Maithripala Sirisena. Weli Raju was killed when he forcibly entered a house and retaliated with an axe by the occupant as he was about to kill the occupant. It is clearly not manslaughter but a murder committed in self-defense. In such an offense, the perpetrator is never sentenced to death. He faces up to 10 years in prison. But our speaker, Nimal Ranaweera in order to earn merits from the former president Maithripala Sirisena, ordered murderer to gallows. It is clearly evidence of his bias judgment in the trial.

There is another crucial case pending before the Gampaha High Court where this corrupt judge Nimal Ranaweera is currently on duty. That is the case of the Army shooting deaths in Rathupaswala. He is also a member of the three-judge panel hearing this case. Nimal Ranaweera, a staunch Gota supporter, is sure to give Gotabaya the verdict he deserves without doing justice to the victims.