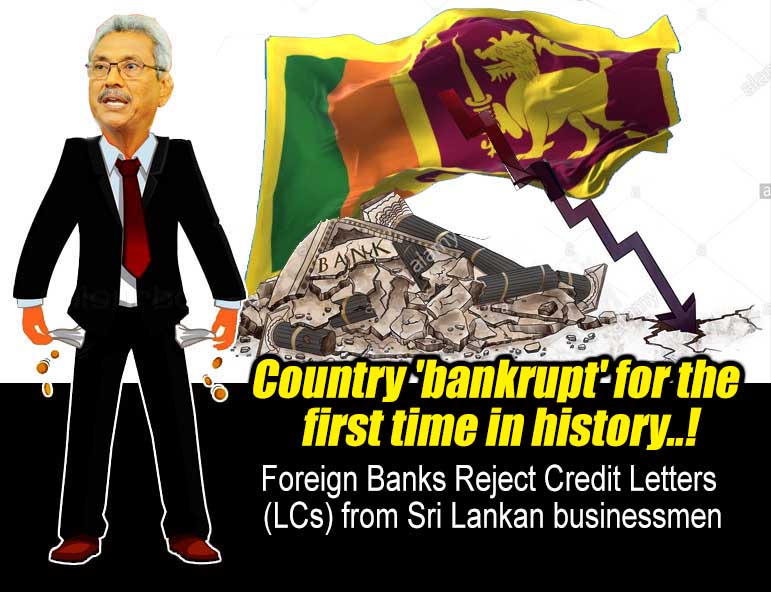 (Lanka-e-News - 24.Dec.2020, 10.00PM)  It is with great sympathy and patriotism we report following one year of presidency Gotabaya Rajapaksa the 'working hero' who came to power claiming to bring prosperity to the country, for the first time in history, Sri Lanka has been officially declared a 'bankrupt country'.

This is due to the fact that businesses import credit letters or LCs obtained from banks in Sri Lanka (Letter of Credit) has been refused accepting from foreign banks. Revealing his experience to Lanka e News, a leading businessman in Sri Lanka said that three of his LC’s were rejected by three major banks in New Zealand, UK and Switzerland. He had submitted the three LC’s issued by the Bank of Ceylon and this was the first time this had happened in his business life. The reason given by the international banks was that Sri Lanka had been downgraded from the international rankings on  Friday the 11th as a country that could not repay its loans. The bank has further said they cannot trust the Letter of credits issued by local banks therefore they prefer direct cash transaction payment or a guarantee provided by another foreign bank.

The businessman said that when obtaining a guarantee from another foreign bank, they should deposit money to the value of those LCs. That is, the same process that happens with cash on hand.

The businessman had informed the Prime Minister Mahinda Rajapaksa about this catastrophe and the Prime Minister has said to obtain LC from a foreign bank for the moment. When inquired about this from Presidents secretariat. The solution they have given is to wait until January 16th. When the businessman asked what was going to happen on January 16, he did not receive any answer. The businessman who spoke to us said that perhaps Gnanakka in Anuradhapura may have predicted to the President that the Four Great Treasures would be revealed on January 16th.

Fear of dealing with a risky country..

In the Fitch International Rankings on Friday the 11th, Sri Lanka was downgraded from B- to CCC in international transactions. Earlier, Moody's ranking too downgraded Sri Lanka from B3 to Caa1. Both of these introductions are at the same level in their respective rankings. That is, naming Sri Lanka as a 'substantial risk' country when dealing with. Fearing to deal with such a risky country, international banks have refused to accept letters of credit issued by Sri Lankan banks as stated above.

Despite such a precarious situation, Basil Rajapaksa who has not done economics even for GCE ordinary level, who poses as a 'great economist', has said the government is not incapable of repaying loans. But when a country goes bankrupt, it means nothing but trusting no one comes forward to lend loans to that country. Rejecting LC confirms bankruptcy

False budget is one of the reasons to downgrade the rankings If Sri Lankan businessmen have to import goods for cash, the result would limit the purchases and will be a severe shortage of goods in the country. It is bound to spread from essentials to luxury goods.

One of the main reasons for Sri Lanka's downgrade in Fitch's rankings is Fitch's refusal to believe the false numbers in the budget recently presented by the Rajapaksa government and pretend a false prosperous said the former Deputy Governor of the Central Bank of Sri Lanka and eminent economist W.A. Wijewardene revealed this in a detailed report to the Daily FT on December 14th (Read Child’s guide to credit rating downgrade: A warning not to be ignored)

Meanwhile, according to the latest data released by the Department of Census and Statistics, Sri Lanka's economic growth in the second quarter of 2020 was the largest drop in Sri Lanka's history. It fell sharply to minus -16.3 percent. It was down to -1.6 percent in the first quarter. At present it is minus -5.3 percent, the department said. That is, the 'development prosperity' boasted by government politicians is a sham.

This is the prosperity brought to the country by the ignorant Rajapaksas who have deceived the people by maifesting snakes together with cannabis Dilith, drug mafia Reno, Neth Nihal and Tiran Hulas plundering the country to a 'bankrupt country' for the first time in history.