Easter Commission is a 'Crime Sanctification Commission'..! A need of an international inquiry is essential..! 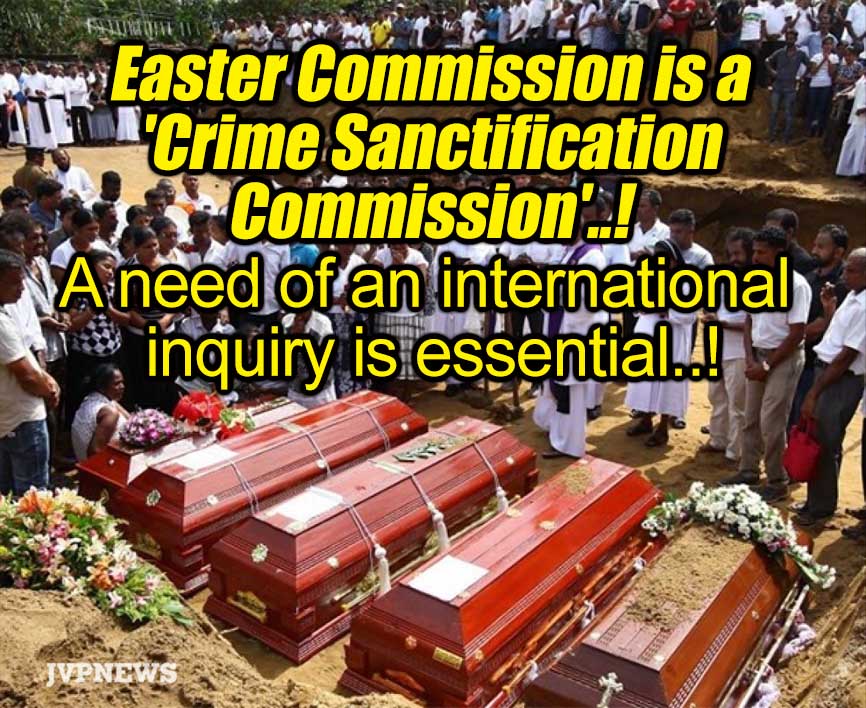 (Lanka-e-News - 25.Dec.2020, 4.25 AM)  With the connivance of the present government, the most fraudulent procrastination and the slow progress of the investigations of the brutal Easter attack has revived a new discourse within the masses following the exposure made by Lanka e News on the 3rd of December. (Reveal the truth..! Commission investigating Easter attack has 13 most important questions to answer..!)

Several members of the Opposition in the Sri Lankan Parliament as well as several political parties have commented on this. But it was limited only a few more voice cuts which did not have enough social influence to enforce the law against criminals fast.

Victims as well as those seeking justice have a strong belief about some connivance and involvement of a gang including the President of the good governance and a powerful group in the present Gotabaya Rajapaksa government in this brutal Easter attack.

From the ongoing slow progress investigation, no expectations can be found from the Gotabaya Rajapaksa government would genuinely intervene to expedite the investigation into the horrific attack on Easter Sunday, punish the perpetrators and bring justice to  more than thousand victims. Gotabaya's Presidential Commission was clearly a 'crime cleansing commission'.

The best example of this is the probing of the complainants instead of investigating the complaint lodged against the former president with the police in the area where the crime was committed who is now without immunity, according to the evidence presented before the Commission.

It has been a year since rhetoric President Gotabhaya Rajapakse came to power, the steps taken to expose the perpetrators and bring those responsible to justice have been extremely slow or not at all.  The word national security was used as a mouth piece during the last presidential election was to defend the Rajapaksa family power, to avoid lawsuits and to suppress democratic opinions.

Except the good governance, the Gota government has not arrested anybody..

Apart from that, no one has been arrested in connection with this attack since the present government came to power. The present government is deliberately covering up further inquiries into certain matters revealed in the Parliamentary Select Committee appointed during the period of good governance and in the Presidential Commission on the Easter Attack. It is reported that "Sarah" alias "Pulastini Mahendran" who knew a lot of important information about this attack and another series of attacks planned in advance has fled to another country through India. The current government has deliberately concealed all information provided by Saharan's wife. Minister of Public Security Sarath Weerasekara himself told the media without any shame that it would take a long time to prosecute the perpetrators of the Easter attack after sending several files to the Attorney General to minimize the pressure. The promises made by Mahinda Rajapaksa and Gotabaya Rajapaksa during the last presidential election to punish all those involved in the Easter attack, as well as the promise to punish the Central Bank fraudsters, have become crying from a single eye.

Following the military defeat of the LTTE Mahinda Rajapakse implemented plans to strength his political power and the Rajapaksa family in the long run. As a strategy, they created extremist organizations and groups with the connivance of state intelligence. He nurtured and maintained those organizations so subtly without each others knowledge. The Ministry of Defense also paid salaries from 2010 to 2015. These are not imaginary but with factual evidence.

In order to accomplish this various organizations were formed using anti-LTTE renegade cadres as well as Tamil and Muslim youths who joined the government's intelligence services after the defeat of the LTTE. Underworld and gangs organized in small groups on motorcycles called 'Ava' in the North. Tawheed Jamath and other organizations under various names in the Muslim-majority areas of the Eastern Province, including Saharan, Kattankudy and Samanthurai were formed. A man named Abdul Razik was sponsored from Colombo and other radical Islamic extremist organizations were created.

Medille Pagnaloka says Gotabaya gave the guidelines and taught us the tricks..

He created and nurtured state-funded Buddhist extremist organizations such as the Bodu Bala Sena, Mahason Balakaya, Ravana Balaya, Sinha Le, etc. in various parts of the country, including the Western Central Province. Madille Pagnaloka Thero had recently told the media that it was Gotabaya Rajapaksa who came to the temple during the formation of the 'Sinha Le' organization and gave instructions. Madille said that Gotabaya had come to the temple and gave 'guidelines' and 'tricks' during discussions for long hours.

While some extremist organizations were given state frequencies in the Broadcasting Corporation to express their views, other organizations allowed radio stations and television stations in the grip of pro-Rajapakse pseudo-businessmen to publish their own voice cuts in a way that would facilitate the creation of social conflicts. A group of monks are still spreading these hatred viruses under the guise of preaching Buddhism. The country's population has been used for more than a decade to ignite racist extremism, not national unity. As a result, extremist and racist conflicts are now erupting under the ashes across the country.

Against this backdrop, no one can rule out the possibility that one of the motives behind the suicide bombings on Easter Sunday, 2019, by Saharan and others was to recapture the Rajapaksas' lost political power. Who can guarantee that other extremist organizations formed with the connivance of the Rajapaksas throughout the country will not launch such barbaric attacks in the future?

With the blessings and concessions of President Gotabaya and Prime Minister Mahinda Rajapaksa, MSD, STF, former LTTE leaders Vinayagamoorthy Muralitharan alias Karuna and Pillayan are embarking on terrorist and violent activities once again in the Eastern Province

The link to the Easter bombing between Maithripala Sirisena and Chief of State Intelligence Nilantha Jayawardena..

Maithripala Sirisena as Defense Secretary, setting a record during his short tenure as Minister of Defense changed five defense secretaries.

The appointment and removal of five defense secretaries time to time weakened the national security with the intention of bloodshed and a change of government.

It is very clear that Maithripala Sirisena, deliberately visited Singapore with his family to allow this horrific attack to have been prevented, has delayed his arrival to the country planning of creating another racist and religious fire similar to the 1983 riots. The good reason is that, president Sirisena preventing the former Prime Minister Ranil Wickremesinghe attending the meeting of security chiefs convened immediately following the Easter attack. Why did Maithripala Sirisena disrupt the Security Council meeting except to ignite the racist fire that was rising in the background?

Former DIG Nilantha Jayawardena, knowing all the details about the date, time and place of the attack, gave statements at the Parliamentary Select Committee and the presidential commission protecting the former Presidential Maithripala Sirisena. Another joke is following the Easter attack, all the important intelligence data on the mobile phone and the laptop he used as the head of state intelligence was deliberately destroyed and distorted.

Therefore, a number of important facts about the people involved in the Easter attack were destroyed. These were revealed in the Commission itself. Is there any other evidence needed to prove that Nilantha Jayawardena is behind the Easter bombing?

Nilantha Jayawardena has also acted conspiring with the dream of becoming the Inspector General of Police chasing the IGP Pujith Jayasundara with the assistance of Maithripala.

It has now been confirmed that the former DIG of the Terrorism Investigation Division (TID) who was investigating the arrest of Saharan was unjustly arrested by a statemet given by a person named Namal Kumara following a trap set by him.

Cardinals behavior and other suspicious incidents..

It is puzzling why Cardinal Malcolm Ranjith, who made many statements and campaigned to enforce the law against the perpetrators of the Easter attack, did not call for an 'international inquiry' into the attack. The Cardinal was well able to call for an international inquiry into the massacre of about 300 unarmed Catholics and foreign tourists in a situation that had been "seriously ignored" by the country's security chiefs. But he never did that.

He said he would continue to have confidence in the country's security forces. Cardinal Malcolm Ranjith, who visited Temple Trees recently and met with Prime Minister Mahinda Rajapaksa, expressed special thanks to Mahinda Rajapaksa (at an emergency meeting on the Easter attack). The cardinal praised the government at a time when the current government has not made any significant progress than the previous government investigating the horrific attack.

Who is the invisible in destroying the evidences?

Due to the series of renovations made by the government to the churches at Kochchikade, Katuwapitiya, Batticaloa and the hotels following the Easter attack many sensitive evidences leading for an international investigation were destroyed. Washing the place where the attack took place led to serious doubts during the the assassination of former President Ranasinghe Premadasa that took place at Armor Street (01.05.1993). The present government too is also intervening to renovate these churches. However, the places of the which killed the former Prime Minister Indira Gandhi (October 31, 1984) by a Sikh from neighboring India and the assassination of former Prime Minister Rajiv Gandhi in Siriperumbudur, Tamil Nadu (21 May 1991) were secured and unchanged by the Indian security forces for many months for further investigations on the instructions of the Government of India to prevent a recurrence of such killings. Why did the situation in Sri Lanka change completely when many countries in the world followed that system? Who wanted to destroy strong evidence?

In view of all the above, local and international pressure must be exerted to the present government to ensure justice for the people who died on Easter Sunday not to further delay to prevent the mass murder of our innocent unarmed people for the sake of political greed in the future as well nothing but for an international inquiry into the Easter attack. The people of the country hope that this will be genuinely mentioned at this Christmas service.