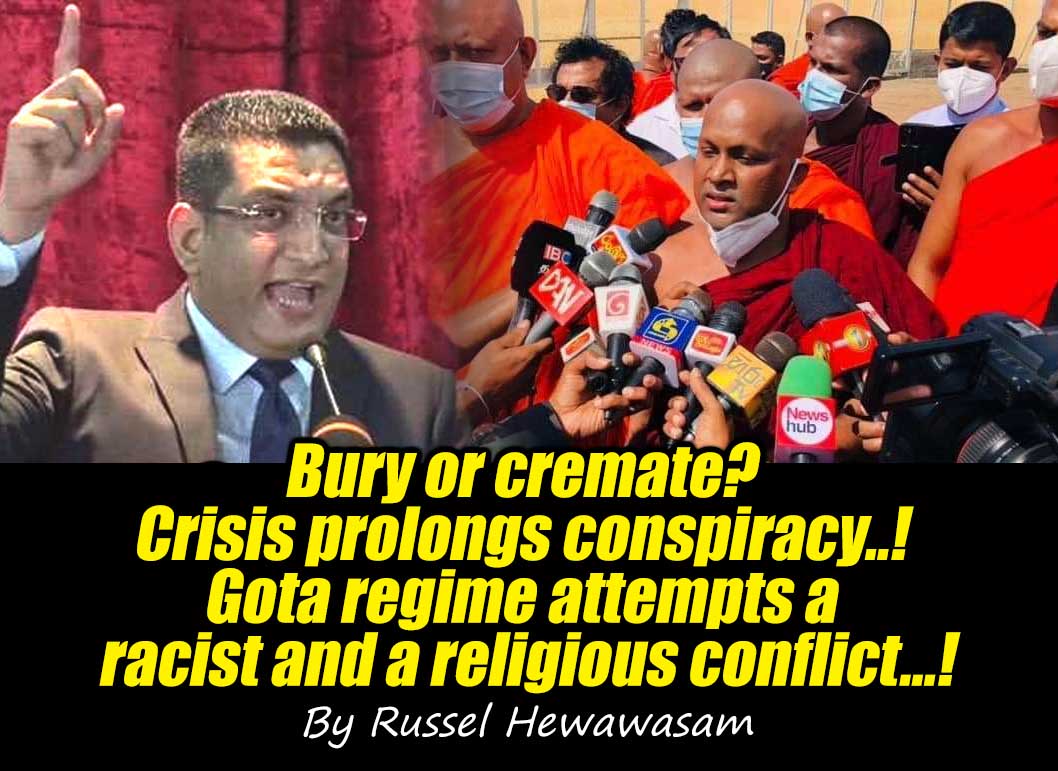 As a result, the Gotabaya Rajapaksa government has failed to prevent the spread of the Covid 19 virus which has drawn public outrage. Gota’s regime is creating a new racist and religious conflict by confusing the whole country with the issue of burying the dead Muslim bodies who have fallen victim to the virus to quell the anger. Azard Sally alleges that more than 120 of the 187 deaths from Kovid deaths were Muslims, and all of them were cremated in the face of Muslim protests.

The government deliberately created a division in the society by this. It created a new hatred among the people. Certainly it was a germ of another racist struggle of the nefarious political ideology of the Medamulana Rajapaksas, it has now come to the streets where it is a struggle.

The screenplay for this hate play was written by the government..

Some say the corpses of all those who die from the corona virus should be cremated. Others have gone to the streets saying there should be no cremation but burials. The screenplay of this hate drama was written with the connivance of the Gotabhaya Rajapaksa government in such a way that Sinhalese and Muslims clash.

The World Health Organization (WHO) recommends that those who die of Kovid infection be cremated or buried. This advice is being implemented around the world. No such problems even in some African countries where many tribes live. But the Gotabhaya government, which has thousand tribal characteristics, ignored the instructions and first arbitrarily cremated Kovid deaths. A so-called expert advisory committee was set up to approve it.

Later, in the face of hostility within the government as well as from various sections of society it lead to the point of secretly burying the deaths of some Kovid-infected Muslims.

Government sponsorship on both sides..

The government sponsored and facilitated both, “Cremate death” and “Bury the death” groups, who were divided into two groups.

The government is consciously and strategically feeding both of these views. There are also a number of characters who has labeled them as intellectuals, overwhelming this virus would contaminate the water when buried, are those who openly lobbied for Gota’s Wiyathmaga. They ignore the feces, urine, saliva, phlegm, droplets, etc. of those kovid  infected people being added to the earth and the virus joining the water sources. They create fear psychosis to the people only about the deaths.

The conduct of the Supreme Court is disgraceful..

It is evident that the attempt made by the declining Gotabaya Rajapakse government paving a way for another bloodbath in a very short period of time to regain its declining popularity through repression.

One year after the Rajapaksa government came to power by promising one country and one law has plunged the country into a number of serious crises due to its inability. (If one country has one law, the vast majority of Rajapaksas would spend time in Welikada or other prisons.)

A group of non-Buddhist fundamentalist robbers belong to a divine sect surrounded the gates of the Presidential Secretariat, threatening they wanted a Putin-style rule as Russia, but the country had returned to a Sirisea gamarala style rule but they urgently needed Putin-style repression. The saffron covered robes lifted their robes and threatened the government what would happen if the government bury the kovid infected Muslim deaths. This protest was organized with the connivance of the Rajapaksas. These saffron robed monks including Begamuwe Nalaka who took part in the protest are receiving allowances and privileges from the government.

Against this, Muslims are protesting and the bodies of Muslims who died of Kovid infection have been dumped in hospital morgues. Muslims say according to their Islamic beliefs, cremation is a sin and haram to say that cremation is an insult to the dead. Protests are building in Colombo, Kalutara, eastern Province and in the North

The Kovid virus created a lot of trouble within the incompetent Gotabhaya Rajapakse government. As the world seeks a vaccine against the virus, Gotabhaya's government is resortingg to thousand polytheistic plays such as inhaling smoke pots and floating pots in the river, porridge vessels, medicated hony and Kundalini energy to suppress Kovid has become so notorious.

Gota regime massacred the Mahara prison inmates who demaded a PCR tests with bullets. Although the Minister of Prisons said that no one was shot dead, the post-mortem report released cofirmed all eight inmates were shot dead.

Justice Minister Ali Sabri openly protesting against the cremation said that Muslim radical youths would take strong action if the scandal escalates. Minister Ali Sabri, who appeared for Gotabaya's free trial, is also playing a supernatural double role role with the connivance of the Rajapaksas.

The country is heading back to a bloody, racist and religious conflict..

The country is heading back to a bloody, racist and religious conflict of the 1983 style. The Rajapaksas are international figures in creating such conflicts

The so-called scholars who brought Gotabhaya Rajapaksa to the forefront by organizing under the name of Viyathmaga are stunned. Channa Jayasumana, who escaped to Parliament from Viyathmaga is connected to the Sudarshana medicated honey racket. He still spread rumors that this virus can be suppressed through Gods mandate. Dr. Sita whispers about a secret medicine that was hidden.

Sri Lanka's anti-Corona squad was able to extort commissions from thousands of poor countrymen who come to their motherland from abroad in fear of the virus and death by forging bills and fastening them in their friends' hotels. When the entire world reduced the price of air tickets, with the consent of the Rajapaksa government the prices of the air tickes were increased four to five times for our foreign workers who arrived by air in fear of death.

In order to cover up many of such crises and scandals, extremist racist Sinhala and Muslim religious groups that were secretly created and nurtured under the Rajapaksa stamp of Medamulana in the near future will kill all over the country, including Beruwala, Aluthgama, Dharga town, Mawanella, Kandy, Digana, Theldenniya and in the eastern province in connection with the Kovid-infected deaths of Muslims. Signs have started from a breaking of a Buddha statue in Mawanella.