The country is reaching a turning point in militarization..! Colonels above Government Agents..! 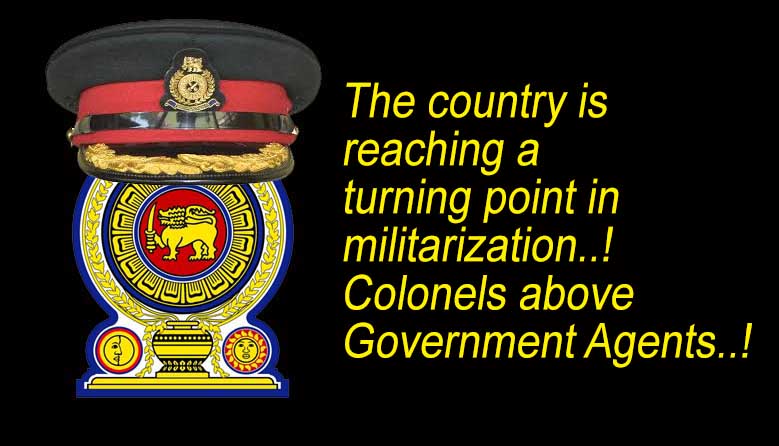 (Lanka-e-News - 03.Jan.2021, 8.30AM) President Gotabhaya Rajapaksa has appointed 25 Army officers above the government agent and District Chief Medical Officers who have no education or experience in medical or administration covering 25 districts of the country to control the Corona epidemic as 'District Coordinators'. Among them are two colonels, a lower rank in the army.

These appointments can be seen as another extension of the continuing appointment of military and retired army officers to various administrative functions in the country since Gotabaya became President and a milestone in the militarization of the country. It is the nature of any military government, arrival of the army in the civil administration. The 25 appointed Army officers are decision makers above the Government Agents in the districts. The Government Agent should even say 'Sir' to these Colonels.

Although they are currently being appointed to combat the corona epidemic according to the statement, economic revival, poverty alleviation and disaster management have been brought under their purview in each district.

Provincial DIG’s are also under colonels..

Gotabaya's milestone in the militarization of the country comes after the people read the one - year progress report of the army chiefs he had previously appointed to various state institutions. Although some people initially had some confidence in the appointment of military officers as heads of state institutions, over the years they have come to realize that appointment military officers are a complete failure.

The best example of this, when the army officer who went to control the price of rice gormandized from Dudley Sirisena. The second was the collapse of the port due to the inefficiency of the military officer who was appointed as the chairman of the ports authority. Out of this, the country's imports and exports have declined by two thirds.

Against this backdrop, the appointment of military officers who make decisions above the civilian rule of the country will undoubtedly push the country further into abyss.

In fact, after this appointment, there is no longer a healthy civilian administration in the country. Now there is real military rule. The day is not far when people will feel it. Politicians elected by the people will soon feel the same way. The devastation with which he raised his hand to the 20th amendment will surely be felt then.

Following are the appointed military officers