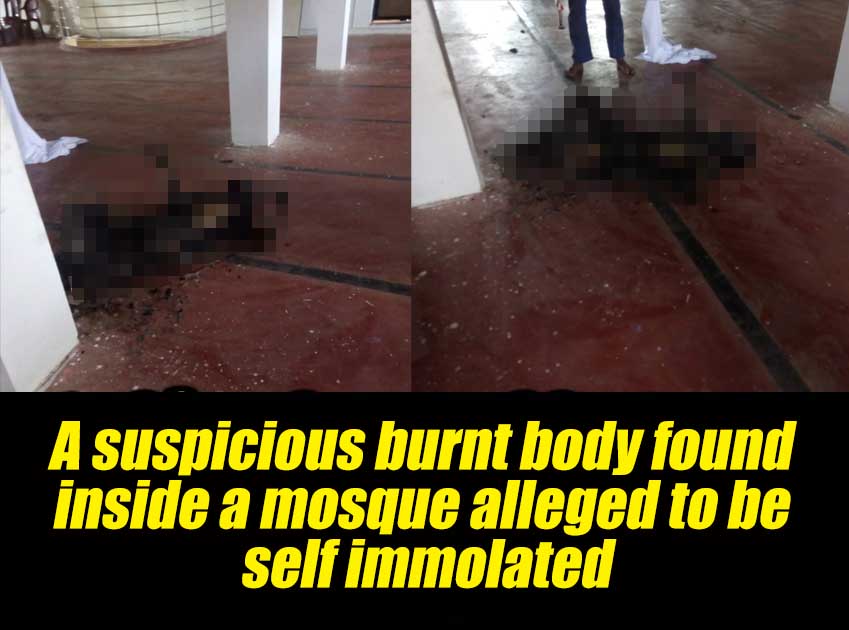 (Lanka-e-News -23.Jan.2021, 11.30PM) A burnt body of a man who allegedly set himself on fire has been found at a mosque in Ratmalayaya, Mohammedia Masjid in Puttalam on 20th afternoon

According to the reporter, the deceased was a 27-year-old man named Nushad Minhad. He is a resident of Thambapanni Manalgundu where his parents live. His father's name is Naushad and his job is said to be selling old clothes. Their family migrated from Mannar to Puttalam some time ago.

The deceased Minhad is a handyman for aluminum fittings. Minhad is said to have attempted suicide on a previous occasion, and was said to be addicted to drugs and involved in thefts. Area people reported the news said he has come to this Mohammadiya masjid once before and this was his second visit where his body was found.

However, Lanka e News has also received a description of the news and photographs of the burnt body of the deceased youth.

Examination of the photographs revealed there was no evidence that a man has self immolated at the scene. Photographs show a cremated body being brought into the mosque from another location. Another major suspicion is that within hours of finding the body of a deceased person, a full description of the person as described above is released.

This incident will be a cause a delight among those who say that the bodies of Muslims who die of corona should be forcibly cremated instead of being buried.

If the government is accused of forcible cremation of Muslim bodies at the Geneva Human Rights Commission next March, This incident will give the government a convincing answer that 'Muslims in Sri Lanka have a tradition of self immolating within the mosques, committing suicide and going to God'.

However, two suspicious suicides have taken place since the current government came to power. One was the case of a journalist who was shot in the head at the Independence Square. There was serious suspicion that the pistol he claimed to have shot had been submerged under his own body, and a computer generated letter he had written before his death which did not have an acceptable signature.

The second was the death of a Dutch monk who was meditating at the Polgasduwa Forest Convent found in the Rathgama Lagoon. It also had a concrete slab tied to both legs to show it was a suicide. Although many attempts were made to show the death of the monk was a suicide, those close to the monk denied the allegation because there was no evidence for it.

This is a third such case reported