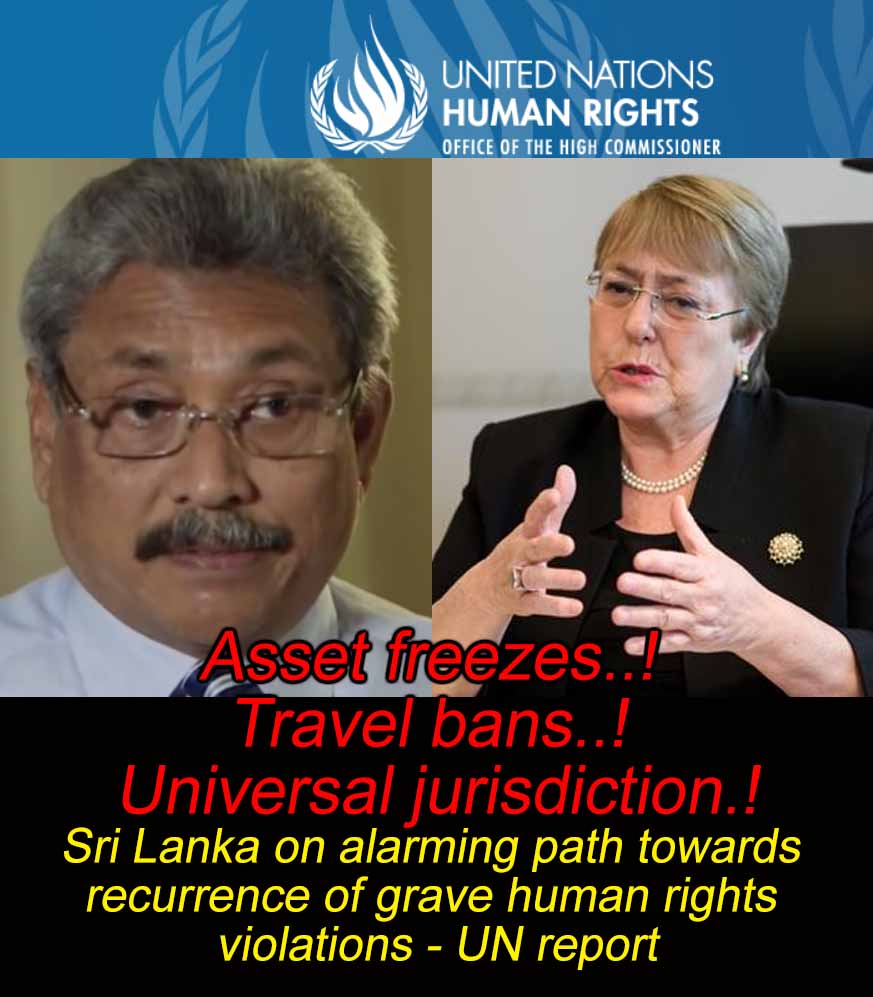 (Lanka-e-News- 29.Jan.2021, 10.30AM) A new UN report published on Wednesday (27) warns that the failure of Sri Lanka to address past violations has significantly heightened the risk of human rights violations being repeated. It highlights worrying trends over the past year, such as deepening impunity, increasing militarization of governmental functions, ethno-nationalist rhetoric, and intimidation of civil society.

Nearly 12 years after the armed conflict in Sri Lanka ended, impunity for grave human rights violations and abuses by all sides is more entrenched than ever, with the current Government proactively obstructing investigations and trials, and reversing the limited progress that had been previously made, states the report, mandated by UN Human Rights Council resolution 40/1.

The report urges enhanced monitoring and strong preventive action by the international community, warning that “Sri Lanka’s current trajectory sets the scene for the recurrence of the policies and practices that gave rise to grave human rights violations.”

Among the early warning signals the report highlights are: the accelerating militarization of civilian governmental functions, reversal of important constitutional safeguards, political obstruction of accountability, exclusionary rhetoric, intimidation of civil society, and the use of anti-terrorism laws.

Since 2020, the President has appointed at least 28 serving or former military and intelligence personnel to key administrative posts, the report states. Particularly troubling are appointments of senior military officials who were implicated in United Nations reports in alleged war crimes and crimes against humanity during the final years of the conflict. These include Shavendra Silva as Army Chief in August 2019 and Kamal Gunaratne as Secretary to the Ministry of Defence in November 2019.

The Government has created parallel military task forces and commissions that encroach on civilian functions, and reversed important institutional checks and balances, threatening democratic gains, the independence of the judiciary and other key institutions, the report says.

The report also documents a pattern of intensified surveillance and harassment of civil society organisations, human rights defenders and victims, and a shrinking space for independent media. More than 40 civil society organizations have reported such harassment from a range of security services - including the Criminal Investigation Department, Terrorist Investigation Division  and State Intelligence officials.

“The High Commissioner urges the authorities to immediately end all forms of surveillance, including intimidating visits by State agents and harassment against human rights defenders, lawyers, journalists, social actors and victims of human rights violations and their families, and to refrain from imposing further restrictive legal measures on legitimate civil society activity,” the report states.

It warns that despite the Government’s stated commitment to the 2030 Agenda, Tamil and Muslim minorities are being increasingly marginalized and excluded in statements about the national vision and Government policy. Divisive and discriminatory rhetoric from the highest State officials risks generating further polarization and violence. Sri Lanka’s Muslim community is increasingly scapegoated, both in the context of COVID-19 and in the wake of the Easter Sunday attacks of April 2019.

The report notes that Sri Lanka’s armed conflict emerged against the backdrop of progressively deepening discrimination and marginalization of the country’s minorities, particularly the Tamils. Grave human rights violations and abuses committed by all parties have been documented in successive UN reports, including extrajudicial killings, enforced disappearances, arbitrary detention, torture and sexual violence affecting Sri Lankans from all communities.

Numerous commissions of inquiry appointed by successive governments have failed to credibly establish truth and ensure accountability for the violations, the report notes. The Government has now appointed a new commission of inquiry to review the findings of previous commissions, but its membership lacks diversity and independence, and its terms of reference do not inspire confidence it will produce any meaningful result.

“While the criminal justice system in Sri Lanka has long been the subject of interference, the current Government has proactively obstructed or sought to stop ongoing investigations and criminal trials to prevent accountability for past crimes,” the report states.

UN High Commissioner for Human Rights Michelle Bachelet stressed that the failure to deal with the past continues to have devastating effects on tens of thousands of family members from all communities who persist in seeking justice, reparations – and the truth about the fate of their loved ones.

“I urge the international community to listen to the determined, courageous, persistent calls of victims and their families for justice, and heed the early warning signs of more violations to come,” Bachelet said, calling for resolute measures by UN Member States.

“States can consider targeted sanctions, such as asset freezes and travel bans against credibly alleged perpetrators of grave human rights violations and abuses.” Sri Lanka’s contributions to UN peacekeeping operations must be kept under review, the High Commissioner added. Bachelet also urged the Council to support a dedicated capacity to collect and preserve evidence for future accountability processes.

The High Commissioner stressed that Sri Lanka will only achieve sustainable development and peace if it effectively addresses systemic impunity and ensures civic space.

“The failure to do so carries with it the seeds of repeated patterns of human rights violations and potential conflict in the future,” she said.

In preparing the report, the UN Human Rights Office sent detailed questions to the Government and received written responses, followed by a substantive virtual meeting with Government representatives on 7 January 2021. The Government also commented on the report.

The report will be formally presented to the Human Rights Council on 24 February, followed by an interactive dialogue.