The President's Easter Commission which released multitude of suspects and closed its operation is outrageous..! 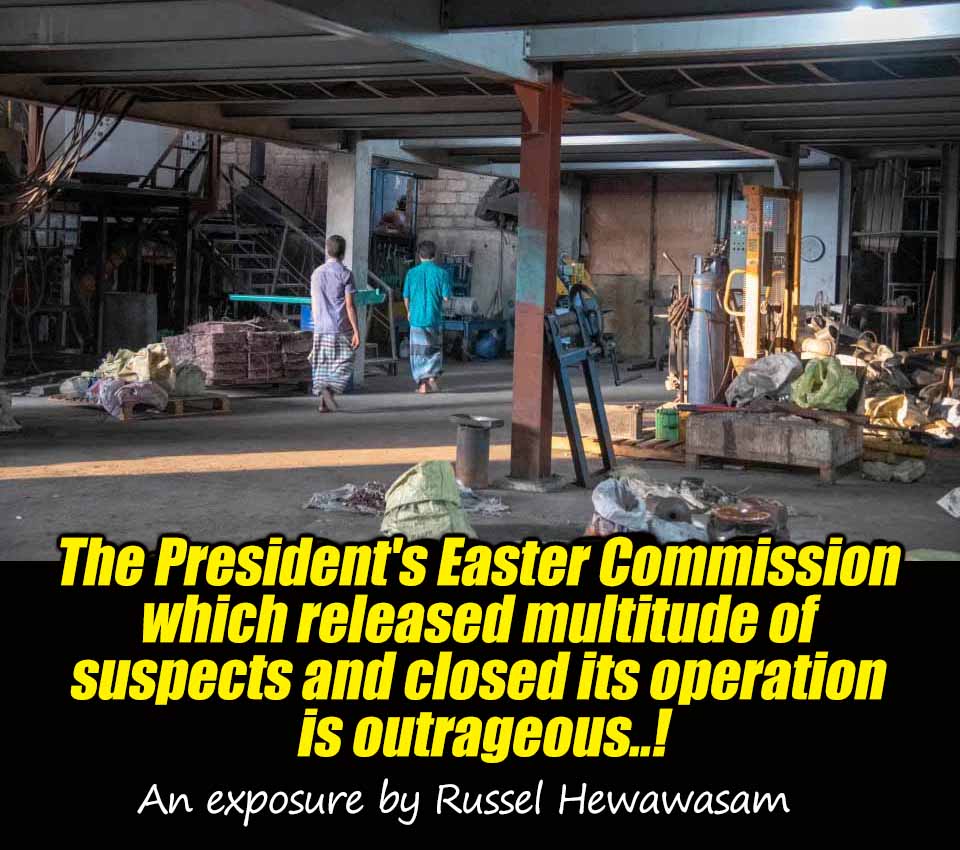 (Lanka-e-News- 01.Feb.2021, 8.15 PM)  The series of horrific suicide bombings that took place in Sri Lanka on Easter Sunday, April 21st 2019, went down in history as the most serious and brutal attack happened in recent days in a country in the world.

The attack targeted three Catholic churches and three leading hotels, but failed to take any security measures despite receiving intelligence about the attack. It has been almost two years since about 300 innocent people were massacred and about 500 were seriously injured.

The president commission which was appointed by the good governance to investigate the series of attacks led under the operation of Saharan Hashim an Islamic extremist terrorist who secretly grew up under the auspices of the state under the nefarious policy of feeding extremists, using them for their own interest of power closed its investigation on the 27th of January 2020. For more than a year, more than 400 people, including former President Maithripala Sirisena, were summoned to the commission for questioning.

Although various information and evidence have come to the fore from the commission, none of the main culprits have been arrested so far. Instead of arrests, leading suspects were allowed to flee the country and arrested suspects are being acquitted and released.

How were the ten members of the Wellampitiya Copper Factory acquitted and released?

Incumbent President Gotabhaya Rajapaksa and his political allies made the 'Easter attack' the strongest topic of their political leap, took this attack as a political blessing and swore it during the last presidential election that investigations into the suicide attack on Easter Sunday would be expedited and the remaining criminals and suspects would be arrested and justice would be done to the victims. Rajapaksha regime infamous for rhetoric unlike other promises it is now pursuing a completely different course of action.

Raw materials were taken from the Cinnamon grand hotel suicide bomber Inshaf Ahamed copper factory named Colossal situated at 111/, Avissawella Road Wellampitiya to make and detonate this bomb. During the tenure of former President Maithripala Sirisena as the Minister of Defense, this factory was recommended to supply used artillery and ammunition shells belonging to the Army.

Ten suspects working at the Wellampitiya copper factory were arrested after the attack. Preliminary investigations from these ten men revealed that they had some knowledge of the attack and that the group had been used for spy site inspection of the attacks beside listening to Saharan’s sermons and training camps in addition to factory activities, It was reported at the time. Their mobile phones and SIM cards were also used for further investigations to ascertain the above allegations.

However, the ten suspects were released on January 19th on the instructions of the Attorney General stating that there was no evidence to further detain them, leaving a serious suspicion to the public. Not only they were acquitted, but the case was closed.

Ironically, the ten were released on the instructions of the Attorney General in the backdrop, Public Security Minister Sarath Weerasekera had submitted a report to the Attorney General seeking immediate action to arrest those who had not yet been arrested in connection with the Easter attack.

The ninth and tenth suspects, Hanifa Abdul Mutalif and Karupaiah Rajendran alias 'Abdullah' were already in remand custody and the court also ordered the Superintendent of Prisons to release them.

Accordingly, all the rhetoric used by the current government as well as the Minister of Public Security Sarath Weerasekara in Parliament and beyond regarding the administration of justice in connection with the Easter attacks has now become nonsense.

Cardinal Malcolm Ranjith’s Easter Protest balloon became impotent following Gotabhaya Rajapaksa won the presidential election.  He visited Temple Trees and met Prime Minister Mahinda Rajapaksa and appreciated the steps taken by the present government to pay compensation for the Easter attack victims. He remained silent on the non-arrest of suspects, delays in investigations and non-compliance with justice. He visited the Katuwapitiya church where a large number of Catholics were killed in a recent attack and participated in a religious ceremony and said that he had not forgotten the Easter attack. However Malcolm Ranjith did not utter any critic regarding the extremist wife Sarah Pulastini who fled to India under the Nandasena governance so called intelligence probing.

The Nandasena Rajapaksa government did not say anything about the immediate suspicious removal of the most outstanding detectives (CID officers) with experience investigating the Easter attack from the beginning.

Minister in charge of Public Security Sarath Weerasekara in Parliament and outside and in the media meetings and the Defense Secretary Kamal Gunarathne did not tell why they could not so far apprehend the person who was above Saharan.

Did the investigations of the two police officers killed at Vavunathivu was undermined to carry out the Easter attack through Saharan?

At a time when Former President Maithripala Sirisena has blatantly violated the Constitution by ousting Ranil Wickremesinghe from the post of Prime Minister and replacing him with the then Prime Minister Mahinda Rajapaksa, two police officers on night security duty were hacked to death in the Vavunathivu area in Batticaloa on November 18th. Two T56 automatic weapons in their possession were also seized. The army intelligence arrested a Tamil youth in Kilinochchi on false charges supposedly related to this murder alleging it’s a revival of the LTTE.

At that time the military intelligence was acting on the instructions of the present Major General Suresh Saleh. Chief of State Intelligence Senior DIG Nilantha Jayawardena had also reported to the CID without any investigation that the attack was carried out by a group of LTTE. As the Minister of Defense, Maithripala Sirisena did not order any further investigation into the matter.

However, it was later confirmed that the two police officers had been killed and the firearms had been abducted by a group including Saharan who had led the suicide attack on Easter Sunday. If military and state intelligence had acted responsibly and carried out a proper investigation, Saharan and others could have been arrested before the April 21st Easter attacks. The serious allegation that the then military intelligence chiefs and state intelligence chiefs used the Easter attack to further their political strategies cannot be ruled out.

Suspicious area of the Presidential Commission on the Easter Attack..

The Presidential Commission on the Easter Attack has deliberately slipped some facts. Here are some of the ones found to be interesting:

1.      No evidence was obtained from any of the Indian security or intelligence services who provided information on Sri Lankan intelligence several times regarding the Easter attack.

2.      Failure to investigate the provision of funds and other facilities given by the Ministry of Defense to extremist organizations including the Saharan from 2010 to 2015 and not to questioning the Secretary of Defense.

3.      Former Minister Rauf Hakeem requested an opportunity to make a secret statement at the Commission but was not given the opportunity.

4.      Secretly obtaining evidence from Saharan's wife Fathima. Allowing no evidence to be reported by the media and restricting her interrogation.

5.      Fathima She is in the midst of intensive care, suddenly becomes infected with Kovid.

6.      Not questioning the present intelligence heads regarding Pulastini Rajendran alias Sarah the wife of Katuwapitiya church suicide detonator, a very significant testament, fled to India or any other country.

7.      Failure to question the Minister in charge of the subject regarding the immediate transfer of all CID officers who conducted formal investigations into the Easter attack and played a significant role in preventing the second series of attacks.

8.      Not giving enough time to Shani Abeysekera, the former head of the CID, who carried out the most important investigations into the Easter attack, to comment at the hearing and not giving the necessary facilities.

9.      Former IGP Poojitha Jayasundara testified about a high ranking Sri Lankan Army officer who paid a large sum of money to the attackers on the eve of the attack but not revealing the identity of the person and not calling him for any testimony.

10.     Not investigating about the people and organizations who funded the Muslim religious service of the Sri Lanka Broadcasting Corporation from 2012 to promote extremist propaganda inciting hatred against other religions, which invaded the broadcasting time of the Tamil national service.

It is only natural that the above should arouse strong suspicion about the Commission.

The Catholic Church, the People's Representatives, other civil society organizations, philanthropists without personal interests, and benefits of the doubt, should have the power to heal the souls of the nearly 300 innocent people who died in the suicide bombings on Easter Sunday, as well as to realize the hope that justice will be done with regard to the deaths of relatives and those who are injured determined not to forget and allow such bloodshed again against the Rajapaksa government, which is currently being severely disliked by the people, must be pressured nationally and internationally to 'do justice quickly.