Let's win the Geneva resolution to defeat the repression..! We demand the establishment of a field office of the High Commissioner for Human Rights in Colombo..! 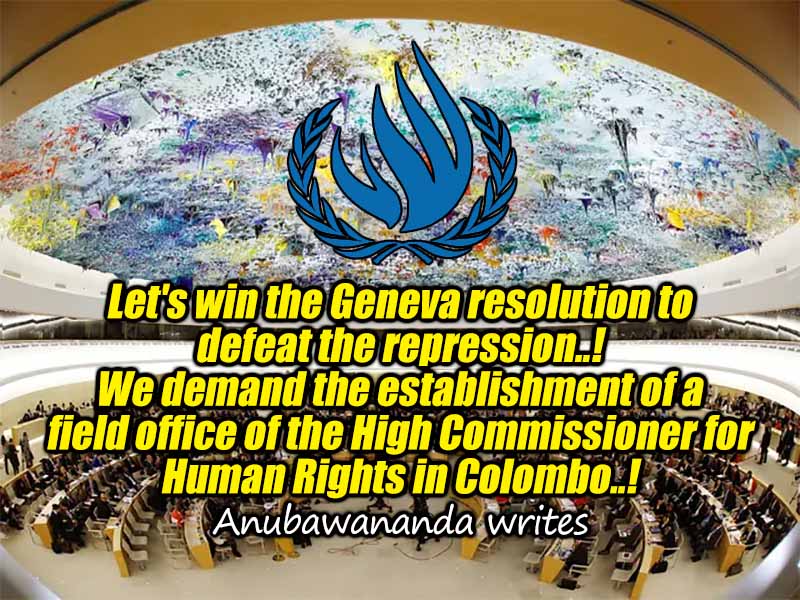 Resolution 30/1 agreed by the Good Governance Government To achieve this, the Good Governance Government co-sponsored Resolution 30/1 at the 2015 UN Human Rights Council. Its aim was to promote "reconciliation, accountability and human rights" in the country. This led to the establishment of a local mechanism to investigate human rights abuses and disappearances during the final stages of the war with the LTTE. The result was the establishment of the Missing Persons' Office and the provision of a monthly allowance to the families of missing persons.

But Mahinda Rajapaksa and his henchmen interpreted this intervention as a betrayal of the 'nation' and a betrayal of the 'war heroes'. That myth was chanted for five years. Gotabaya Rajapaksa promised in the presidential election that he would liberate the country from the international promises made by the good governance. Accordingly, the President Gotabaya Rajapaksa withdrew from Resolution 30/1, which was co-sponsored by the good governance at the UN Human Rights Council in 2015. It withdrew from subsequent resolutions 34/1 and 40/1. 69 lakhs of Sinhala Buddhist chauvinists loudly applauded the joy of this decision. Foreign Minister Dinesh Gunawardena, who visited the Human Rights Council in Geneva in February 2020, announced the decision and promised that the Sri Lankan government would appoint a new Commission of Inquiry.

Proposals of the three Tamil parties..

The three Tamil parties call for the adoption of a "final resolution" on Sri Lanka at this year's Geneva conference (February 22 to March 19). They point out that Sri Lanka has failed to investigate all crimes, including human rights abuses, genocide, crimes against humanity and war crimes committed during the ethnic conflict. The parties call for the establishment of an international independent investigation Mechanism with a 12-month time frame.

The group, including Tamil parties, has called for the establishment of a permanent mechanism to gather evidence, similar to the International Independent International Inquiry into Syria (IIIM), which has been established as an affiliate of the United Nations General Assembly.

The stakeholders point out that member states should acknowledge that a domestic mechanism cannot be put in place for human rights violations in Sri Lanka, as all the leaders of Sri Lanka's major political parties have made it clear that they are not prepared to prosecute the Sri Lankan Armed Forces.

They further emphasize that the intervention of the International Criminal Court is essential for this matter. Intensification of repression against the Tamil people, including militarization, indefinite detention of political prisoners, land grabs, scrutiny of political and civil  society activists, denial of burial rights to our Muslim and Christian brothers during the Kovid period; Tamil political leaders point to the growing situation, including the denial of the right to remembrance, and call on the Human Rights Council to intervene.

They also call for the establishment of a field office of the United Nations High Commissioner for Human Rights (OHCHR) in Sri Lanka to monitor the ongoing repression of civilians and human rights abuses in the North and South under the Gotabhaya Rajapaksa government.

The resolution of Amnesty International..

Amnesty International calls for the establishment of an international accountability mechanism to monitor and report on the human rights situation in Sri Lanka during the 46th session of the United Nations Human Rights Council (UNHRC) from 22nd February to 19th March.

Amnesty International points out that no progress has been made in creating such a mechanism since 2015, and that there have been alarming developments at the national level, with trends that have so far undermined limited progress on accountability. Their examples are as follows:

1.      In July 2019, a court acquitted 13 members of the security forces accused of killing five students in Trincomalee in 2006, saying there was "no evidence".

2.      Under Gotabaya Rajapaksa presidency a Presidential Commission of Inquiry into Political Revenge was set up in January 2020, which is hampering existing judicial proceedings, including the disappearance of Prageeth Eknaligoda. This commission intervened to stop legal action against naval officers arrested on charges of abducting and killing 11 youths in Colombo and suburbs in 2008 and 2009 period.

3.      Sergeant Sunil Ratnayake, convicted of the Mirusuvil massacre that killed eight Tamil civilians in March 2020, has been granted a presidential pardon.

4.      The new Gota administration has given promotions to several military personnel named in the 2015 UN High Commissioner for Human Rights' report on Sri Lanka.

5.      The Attorney General's Department recently told the Batticaloa High Court that the case filed in 2005 in connection with the murder of former TNA parliamentarian Joseph Pararajasingham would not be taken forward. Accordingly, the five suspects in the case were acquitted and released by the court.

6.      The government-backed TMVP leader, a prime suspect , Sivanesathurai Chandrakanthan (Pillayan) of this murder was also released.

Amnesty International says in its request has witnessed horrific repression in Sri Lanka through the targeting and intimidation of human rights activists, journalists and lawyers during the first year under the Gotabaya Rajapaksa government.  Therefore, they point out that the intervention of the Human Rights Council targeting Sri Lanka is urgently needed.

Even after one year after the Geneva pledge, the Gotabhaya Rajapakse government has yet to set up a new commission of inquiry. The Government of Sri Lanka rejected the invitation to co-sponsor a resolution on Sri Lanka at the 46th Session of the UN Human Rights Council, which begins next February. Proposals submitted with the co-sponsorship of the relevant country would be unanimously approved by all member states of the Human Rights Council and are not considered "strong proposals". However the Gotabaya Rajapaksa government could not agree to such a proposal because of the social illusion they created to come to power. Foreign Ministry Secretary Jayanath Colombage had stated this to the Sunday Times on January 17th. He said that the government could not discuss such resolutions again as it was a political challenge to the government as Gotabaya Rajapaksa was given the mandate in the 2019 presidential election to withdraw from the resolutions co-sponsored by Sri Lanka.

The government now has to face the consequences of sowing myth and Sinhala-Buddhist racism for the last five years. Reassembling the demons they released is a very difficult exercise. However, a key delegation from Canada, Germany, Northern Macedonia, Montenegro and the United Kingdom will bring a new resolution on Sri Lanka to the UN Human Rights Council in Geneva next February. According to reports, India will also support it. It is said that the Indian Foreign Minister who visited Sri Lanka recently has informed the government about this. Political sources say that the Indian Foreign Minister had strongly informed the government after the demolition of the Jaffna University monument while he was in Sri Lanka. However, if India supports this resolution on Sri Lanka, it will be serious for the government.

At this juncture, it is the responsibility of every anti government person is to support the request of Amnesty International to the Human Rights Council by the three major political parties in the North and East. The Tamil people and the international community must not be allowed to be deceived by further fake domestic investigations. The United Nations High Commissioner for Human Rights (OHCHR) should be compelled to establish a field office in Sri Lanka to investigate ongoing human rights violations and repression in the country. Proposals should be made to create a new mechanism to involve foreign judges in order to obtain justice from the courts of this country. If the main opposition continues to chant the patriotic nationalist mantra, Rajapakse's repression will paralyze them. Rajapakse's repression can only be overcome to some extent through international pressure. The Geneva Human Rights Conference, which opens in February, should be used for this purpose. The main opposition in the country should not log this as an issue of the Tamil people and Tamil parties but turn it into a struggle to win the freedom and human rights of all Sri Lankan citizens.