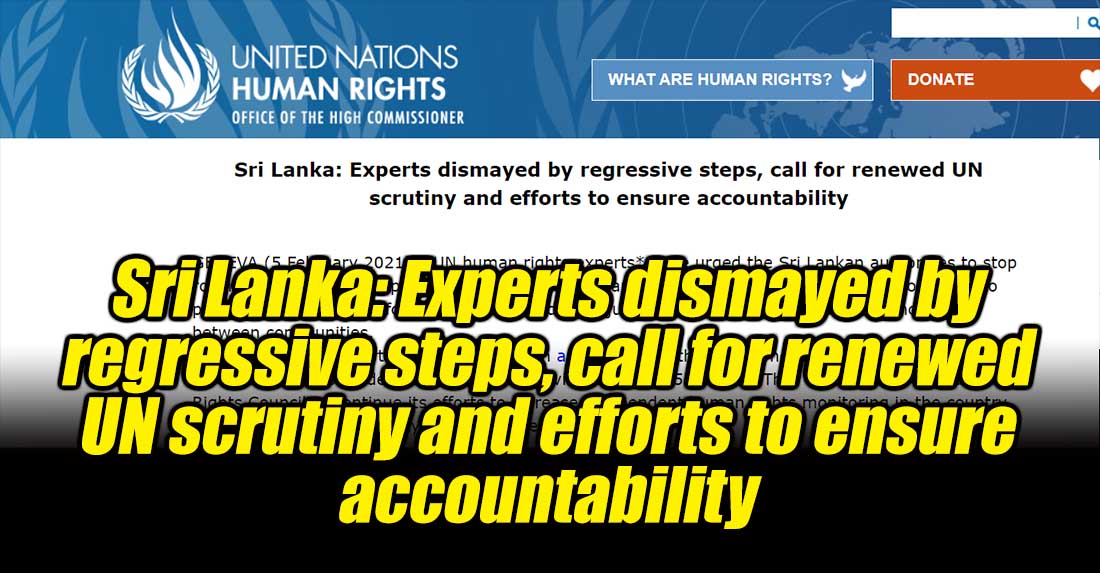 (Lanka-e-News -08.Feb.2021, 7.45AM) UN human rights experts* have urged the Sri Lankan authorities to stop rolling back hard fought progress made in recent years on rebuilding democratic institutions, and to press for accountability for past crimes and deliver justice for victims and promote reconciliation between communities.

The independent experts published today an assessment of the government’s follow up to some 400 recommendations made following 10 official visits from 2015 to 2019. They called on the Human Rights Council to continue its efforts to increase independent human rights monitoring in the country and to ensure accountability for past crimes.

“We are dismayed at the emerging trends setting back the promotion of reconciliation, accountability and human rights, reducing civic space and eroding important institutional safeguards for the protection of human rights, issues also raised in the High Commissioner’s report,” they said, pointing to the government’s increasingly majoritarian rhetoric threatening victims and minority communities.

“The Easter Sunday terrorist attack in April 2019 and the COVID-19 pandemic has put an enormous strain on the country – yet the national security centred response to these crises and the accelerated trend towards militarization of civilian public functions, including through the appointment of active and former military personnel allegedly implicated in war crimes, is alarming,” the experts said.

Such responses together with the recently approved 20th amendment to the Constitution which removes important institutional checks and balances, have threatened the integrity of Sri Lanka’s institutions and the judiciary, eroding safeguards that are essential for democracy and the rule of law, they said.

The Government has placed the achievement of the SDGs high on its agenda, however without transparent, effective, inclusive and accountable institutions, goals such as ending poverty, ensuring education and promoting economic growth cannot be fully achieved (SDG 16).

"At the time of our visits, we witnessed an opening of space for Sri Lanka’s dynamic civil society, but this has once again become increasingly closed and unsafe,” they said, adding that using national security legislation to this effect was regrettable. An active and independent civil society is important for any democratic and peaceful society to ensure authorities hear the voice of the voiceless, the experts said.

“During the COVID-19 pandemic, restrictions have been unevenly imposed on the rights to freedom of expression, association and peaceful assembly, resulting in the arrest and detention of social media commentators and others,” they said. “Since 2019, increased surveillance, harassment, questioning and threats from security agencies against human rights activists, journalists, lawyers and families of victims have been regularly documented.”

Ethnic and religious minorities, namely Tamils and Muslims, have also been increasingly marginalized and stigmatized especially during the pandemic, the experts added, pointing to authorities’ failure to prevent speech that incites discrimination and violence against minorities. Moreover, the ongoing compulsory cremation of COVID-19 bodies against the religious and cultural rites of minority communities is concerning and must be ended.

“Despite the scale and magnitude of enforced disappearances in Sri Lanka, the authorities have failed to make progress in investigating these cases, identifying the whereabouts or fate of the victims, and holding perpetrators accountable,” they said.

Distress and anxiety have mounted among victims and their families as the Government has signalled a different approach to the issue and cast uncertainty over the future of the Office on Missing Persons and the Office for Reparations. Also, war widows and women relatives of the disappeared who search for truth, justice and accountability, as well as women activists who advocate on their behalf face particular risks.

Numerous recommendations made on the prohibition of torture, including repealing the Prevention of Terrorism Act, remain unaddressed, the experts said. Prison reform appears to be on the Government’s agenda but root causes remain to be addressed and conditions of detention often amount to cruel, inhuman or degrading treatment. More broadly, allegations of custodial deaths, abduction and torture continue to arise.

The experts said the Government’s failure to address impunity was a cause of utmost concern. In February 2009, a different set of 10 UN experts highlighted that “impunity has been allowed to go unabated throughout Sri Lanka. The fear of reprisals against victims and witnesses, together with a lack of effective investigations and prosecutions, has led to a circle of impunity that must be broken”.

“It is extremely disheartening that the diagnosis remains the same 12 years after,” the experts said in their 2021 assessment. “Sri Lanka’s long history of largely unrelated and inconsequential commissions of inquiry has increased mistrust in the Government’s determination to genuinely redress violations. There is little hope that any domestic accountability measures will progress or achieve any degree of credibility.

“It is against this backdrop, that we wish to reiterate the urgency to implement the recommendations made in our country visits’ reports which remain valid and of utmost importance. We call on the UN Human Rights Council and the international community to keep the human rights situation in Sri Lanka under a high level of scrutiny and to explore all possible options for advancing accountability in the country, including through further international accountability measures.”

They said the Human Rights Council and Member States should therefore strengthen independent monitoring, analysis and reporting of the human rights situation in Sri Lanka and establish an impartial and independent international accountability mechanism which would seek to build upon the work conducted by different UN mechanisms by investigating, compiling, and analysing information.

Special Rapporteurs are part of what is known as the Special Procedures of the Human Rights Council. Special Procedures, the largest body of independent experts in the UN Human Rights system, is the general name of the Council’s independent fact-finding and monitoring mechanisms that address either specific country situations or thematic issues in all parts of the world. Special Procedures’ experts work on a voluntary basis; they are not UN staff and do not receive a salary for their work. They are independent from any government or organization and serve in their individual capacity.

Country-specific observations and/or recommendations by the UN human rights mechanisms, including the thematic special procedures, the treaty bodies and the Universal Periodic Review, can be found on the Universal Human Rights Index https://uhri.ohchr.org/en/