21 valuable tea estates owned by the government given to China..! Here are the conspiracy of the incredible deal..! 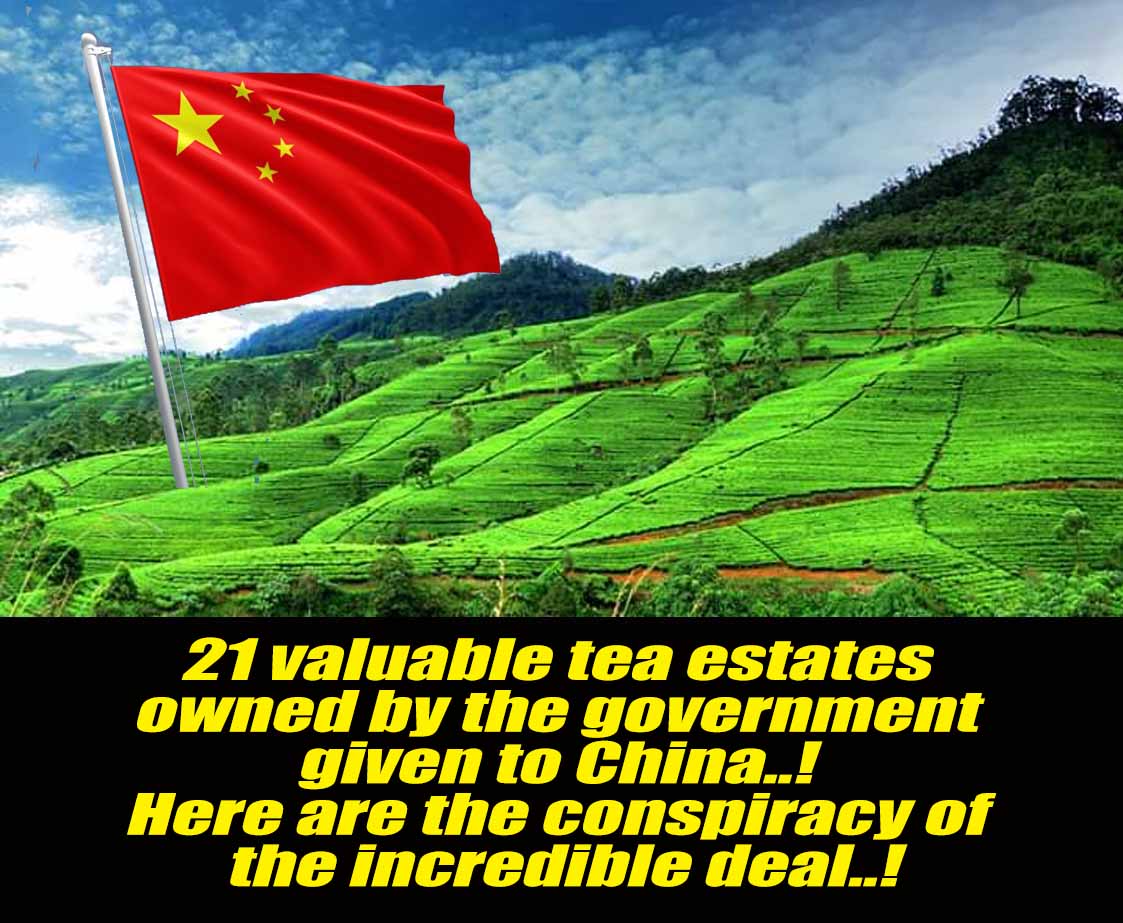 (Lanka-e-News -13.Feb.2021, 11.30PM) The junta government of the Gotabaya-Mahinda Rajapaksa-led Rajapaksa family, which came to power swearing not to sell the country, has made all arrangements to sell 21 state-owned tea estates to China, reports Lanka e News.

As a first step, the government is announcing that the Sri Lanka Tea Board has signed a business agreement with China. Accordingly, the Ceylon Tea Board has signed an agreement with a Starchina International Trade Company Limited in China and China will buy 4 million kilos of local tea at market price for a period of 15 years, a government spokesman said. But according to a press release issued by China, they buy tea from Sri Lanka at a pre-agreed price. China further says that they are working to modernize the tea factories in Sri Lanka.

According to goernment spokesman's statement that China will buy tea for 15 years at market prices is a slouch. China always buys tea at a fixed price.

For this purpose, 21 tea estates owned by the Government of Sri Lanka are to be handed over to China. It is said that China is working to modernize Sri Lanka's tea factories by buying tea estates. It is also known that these tea estates would be bought by China (the new name to buy is investment) at an unimaginably high price. It is said that this high amount is enough to pay all the debts in Sri Lanka. When Sri Lanka was recently asked by India to repay a $ 400 million loan, China had already provided $ 1500 million to Sri Lanka. Sri Lanka paid off the debt in two days which made India surprise.

However, during Chandrika's rule, India had earlier proposed Sri Lanka to buy Sri Lankan tea at a fixed price without buying any tea estates, but the then government did not like the Indian proposal. The reason given was that Sri Lanka would lose the international brand 'Sri Lanka Tea'. But now China is going to do the same.

Although there is no agreement, China already imported 14.2 million kilos of tea from Sri Lanka at a competitive price in 2020. It also says it will increase by 20% annually. If so, there are no benefit to Sri Lanka in exporting 4 million kilos of tea to China for 15 years at a pre agreed price. The Rajapaksha junta is preparing to sell the tea estates to China.

The Rajapakse junta also hopes to end India's influence on Sri Lankan politics through tea plantation workers of Indian origin by selling the tea estates to China. Mahindananda is bragging to return tea estates owned by plantation companies that cannot pay the minimum wage of Rs. 1000 is due to this Chinese deal.

Patriots who dance for the Chinese bribes..

The reason is that China bribes all these patriots. Anyone can verify this by checking the bank accounts of the trade union leaders and their family members who came to rescue the East Jetty. China bribes not only the trade unions but all political parties, the Buddhist clergies and the media in Sri Lanka. That is why patriotism against India, America and Europe is intensifying and that patriotism against China is hidden behind. That is why we call them patriotic rats.