Hundreds of Soldiers vulnerable to Korona , SLAF is trying to celebrate its 70th birthday without vaccination. Here's the real story of the tragedy.! 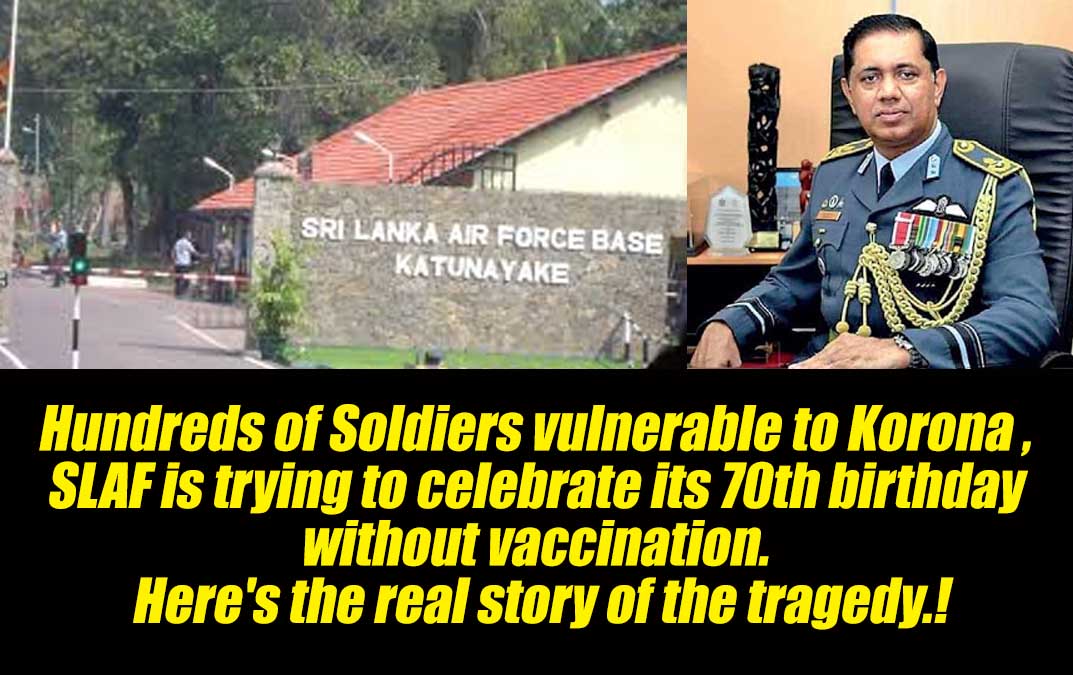 (Lanka-e-News- 08.March.2021, 11.00AM) While the soldiers of the main Katunayake air force camp in Sri Lanka was not given the kovid vaccination, despite many kovid infected people are found island wide, the government is tryng to celebrate the 70th birthday of the Sri Lanka Air Force inflicting the soldiers lives at risk, reports reaching Lanka e news confirms.

There are near 4000 airforce soldiers in the Katunayake Air Force Camp. Some of them are married families. Out of them, about 10%, that is around 400 are already in quarantine. The quarantine period is 14 days.

However, the camp does not have the facilities to conduct PCR tests for Kovid testing and the samples are sent to the Katunayake Airport Laboratory. The camp hospital only has facilities for rapid antigen tests.

A location near the Goluwapokuna camp facilitates 100 persons infected by kovid in other ranks in the camp. A limited number of facilities have been provided at the camp hospital for infected officers.

There are only five qualified MBBS doctors from Katunayake camp hospital. There is only one qualified public health inspector. Meantime only one laboratory technicians registered with the Medical Council is available now. There is no specialist doctor responsible for Kovid infections and there is a lack of nursing staff. There are not many essential medicines available and there is a shortage of drugs in stores.

There are no immunization programs for non sick people. The vaccination was given only to a group of people. There is no vitamin such as prophylaxis medicines. There is a severe shortage of gloves, masks, IR thermometers, etc. Moreover, the soldiers here have not been properly provided with uniforms for the year 2020.

At this juncture, Air vice Marshal Udeni Rajapaksa, commanding officer of the Air Force and other Air Force Commanders wanted to hold a large arms drill demonstration with the participation of 900 personnel from other bases camps to celebrate the 70th anniversary in a grand manner. About 250 Air Force personnel from India are also scheduled to visit Sri Lanka for this event.

There is also a shortage of water for basic needs of service personnel called in from outside camps. About five to seven people of those who report illnesses from the area where the demonstrations are already taking place are becoming positive for rapid antigen tests everyday. They are directed to the aforementioned locations. These treatment centers are now overcrowded. Many others have reported symptoms but have inadvertently avoided receiving treatment.

Another special case is that no one at the Katunayake Air Force Base who is Kovid Positive is reported to the MOH office in the area. None of the area's public health inspectors have visited the camp since the kovid outbreak began.

The use of quarantine personnel in camp for clean-up operations for the 70th anniversary has greatly increased the likelihood of an outbreak at the Katunayake Air Force Base.

Is it possible for a country's major army to act in such anirresponsible manner?

In spite of all this, the authorities want to hold a grand demonstration to celebrate the 70th birthday and use the war hero to forget not only the real problems in the country but also in the Air Force. The Commander of the Air Force, Air Marshal Sudharshana Pathirana, who aspires to stand out, also wants this parade to be held somehow.

Troops were deployed to parade in the blazing sun, wearing camouflage with two masks. Wearing masks during the hot summer months is difficult for the average healthy person. Is it possible for a country's main army to act irresponsibly by discarding health laws without helping to prevent the spread of the Kovid epidemic in the country?

On the other hand, isn't this a brutal violation of the human rights of Air Force soldiers?