By Prof. D. A. Basnayaka 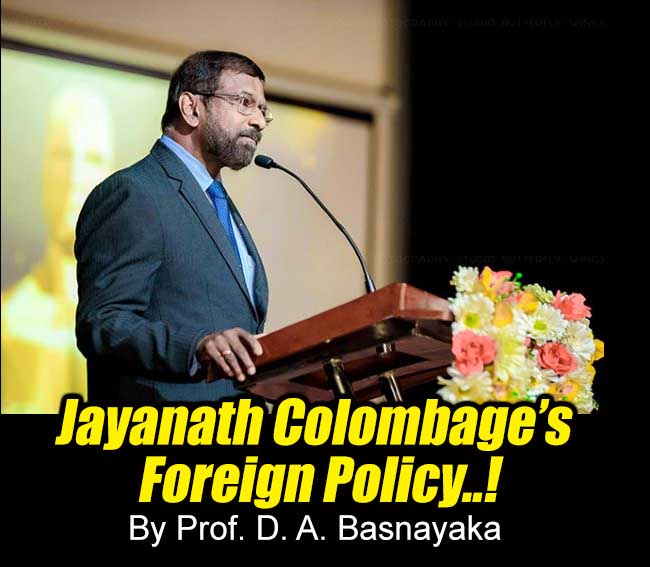 (Lanka-e-News -09.March.2021, 5.30PM) Foreign Secretory Jayanath Colombage in Jan 2021, commenting on the impending resolution against Sri Lanka in 46th Session of United Nations Human Rights Council (UNHRC), said that: “SL doesn’t want strategic military alliance with any country. We need strategic autonomy for us to make decisions based on what is best for our country.” Mr Secretory further commented that “To stay away from this competition, we have indicated that we want to maintain a neutral policy while technically being a non-aligned country. Many countries do not like to see Sri Lanka as a neutral country!” On the good side, given the current circumstances of the country, this assessment seems reasonable, and a good policy stand for the country. On the flipside however, he seems to be inadvertently giving a message of desperation and helplessness, and is almost pleading for strategic autonomy. Furthermore, staying away from competition is not helpful. Sri Lanka should always compete with its rivals for economic growth, and take a strong stand against the aggressors who threaten Sri Lankan value system. Instead of pleading, how can Sri Lanka achieve strategic autonomy, and compete with its rivals successfully?

Both India and China are flexing their muscles in the region around Sri Lanka, and US is watching from distance as to how Chinese expansion and influence could be contained. The influence of Middle Eastern countries and the Islamic terrorism is growing in the region. On top of all these developments, United Nations (UN) and its subsidiary organizations, especially UNHRC, seem to have fixated to hold Sri Lanka accountable for many things. Amidst these multitude of prevailing forces, it is perfectly reasonable to resort to non-alignment strategy, and one may also find justifications for non-alignment strategy from recent Sri Lankan history. In the period of Mrs Bandaranaike’s non-alignment policy, Sri Lanka enjoyed some international reputation and support, but with President Jayewardene’s cosy relationship with US proved incredibly costly for Sri Lanka in many ways.  Against the backdrop of such a recent history, it appears that it is madness even to suggest an alternative to non-alignment foreign policy.

The vertical manoeuvring includes several key elements, but in summary it is about deterrence. The deterrents can be very useful in shaping the thinking of potential competitors, meddlers, and aggressors. Moving vertically means increasing the scientific and technological capabilities within the country in general, enhancing the offensive/defensive capabilities of the armed forces, and more importantly demonstrating some key capabilities and readiness of armed forces while keeping the full strength hidden from competitors. In order to keep the full strength hidden, the foreign intelligence activities in the country should be drastically minimized.

In modern times, since the negotiation of the withdrawal of British troops from Trincomalee and Katunayake in late 50s by late Prime Minister Bandaranaike, Sri Lanka saw a cliff-edge drop of its capability to deter potential aggressors, which proved disastrous for a young democracy like Sri Lanka. Even after 70 years, Sri Lanka still does not have competitive deterrents to discourage and dissuade local or foreign aggressors. The extremely vocal and inquisitive general public often lead by Buddhist monks, and Sri Lanka’s full UN membership are the only competitive deterrents, that Sri Lanka currently possess.

It is true that Sri Lanka has a reasonably-sized, combat-ready army in terms of personals, but it is extremely under-resourced and lacks technological sophistication. Sri Lanka Navy is also under-resourced, and cannot rival any regional power. The campaign against LTTE, on the one hand, demonstrated the bravery and dedication of the men and women in SL armed forces, but on the other hand it also exposed Sri Lanka’s lack of technological capabilities and sophistication to the entire world.  For instance, at the height of the war, Sri Lanka was heavily relied upon the foreign expertise for security assessments and advanced technologies like Radar systems. One of the unsung heroes of the war was the Radar systems received from India, US and Canada. They were instrumental in curbing LTTE’s key supply chains, and doing air surveillance.

Performing “vertical manoeuvring” is neither an expedient solution nor an easy task. It demands unwavering political will and public support for a longer duration of time. Meticulous planning is essential, and it may also require establishing a statutorily-sound agency. The recruiting and retaining individuals with the right set of expertise will be immensely challenging, and at times, could be frustrating. The large scale brain drain happening in the country will only exacerbate this problem.

Importantly, enhancing deterrence capabilities of armed forces does not mean buying bottom-of-the-range equipment from foreign countries at inflated prizes. Ideally, it means developing these capabilities in Sri Lanka by Sri Lankans. There are two immediate challenges. Sri Lanka currently goes through a “local capability vicious cycle”, where it has a widespread scarcity of sophisticated local capabilities to take on new projects, especially advanced scientific and technical projects. The political leadership appears to have little or no faith in the local capabilities, so they heavily resort to foreign capabilities often at very high cost. As a result, the native population face increasingly uphill battle to improve their capabilities and confidence, so they remain less attractive and competitive.  Secondly, the financing such long-term projects could be an extremely unpalatable proposition to many too. Amidst the pandemic, and with an extremely vulnerable economy, some might question the practicality of this. Some even might suggest this as daydreaming. Nevertheless, Sri Lanka should consider embarking on this arduous task sooner rather than later, because the only alternative to strengthening deterrence is submission, bearing the consequences of endless foreign meddling such as Indo-Lanka Accord in 1987, or perhaps total subjugation. On the good side, the financing could be manageable, because this type of projects does not require a large sum of money at once.

At the time of LTTE offensives, many individuals expressed their views, almost in competition with one another, to enhance the defence capabilities of Sri Lankan armed forces, but since mid-2009, all these calls have fell silent. However, it is the peace time, that is most suitable to focus on defence capabilities such as deterrence. With the proliferation of the internet and internet services, there has never been a better time, in terms of the cost and the availability, to acquire scientific and technological knowledge and expertise.

Sri Lanka could have started strengthening deterrence capabilities immediately after the withdrawal of British troops in late 50s, or at least more recently after 2009 under President Rajapaksa. The current government came to power on the promises of national security, and it seems to be led mainly by personalities, who made contributions to the war efforts in 2009. Due to their contributions to the war effort, the general public seems to have overwhelming confidence and trust in their ability to safeguard the national security. They have been in power for over a year with almost all the institutions of authority are firmly under their control. From top to bottom, people in the government machinery and also those who support the government ooze confidence and cheek. However, so far, we did not see at least an acknowledgement from any authority of the present government of this very important aspect of national security, let along strengthening the deterrence capabilities. They instead seem fixated with tangential issues such as amending the national flag.