The biggest tax fraud in South Asia or crafty'Nandaseeni' fraud..! Mahinda must resign..! 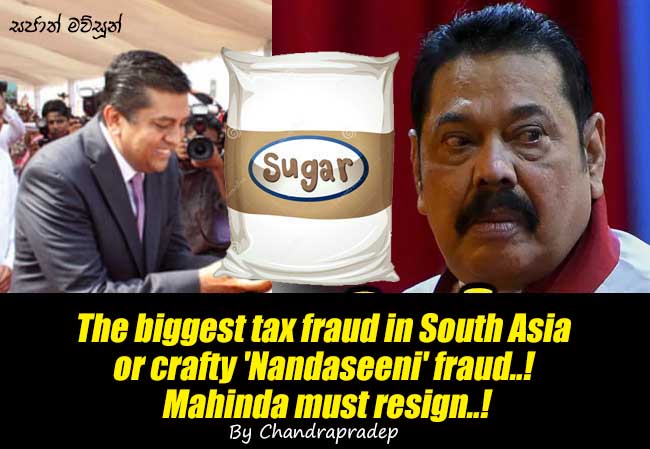 (Lanka-e-News -13-March-2021, 2.00PM) The finance ministry of the Gotabaa government which says the largest sugar tax fraud done in Asia in broad day light under the Rajapaksa government by conspiring deceiving gazettes was not a fraudulent act but a normal activity of a business folk. The Minister of Finance has reported that the government has lost tax revenue of Rs. 1590 billion through the Ministry of Finance. The Chairman of the parliament fiscal committee Anura Priyadarshana Yapa revealed yesterday.

Minister of Finance Minister Mahinda Rajapaksa levied a tax of Rs. 50 in June 2020 for imported sugar. The gazette in the 2197/12 of October 13 reduced the tax unimaginable to 25 cents. By the time Gotabaya’s bosom friend Sajath Mowzzoon has already loaded 100,000 metric tons of sugar to Sri Lanka. Customs states that only 45,000 metric tons are imported per month to Sri Lanka.

If so, Sajath had placed an order to import around 100,000 tons of sugar at once because he knew about this scam. After Sajath's sugar stocks landed in Sri Lanka, a tax of Rs. 40 was imposed on sugar again on October 27. It is not possible to change the import tax until a month after it was gazetted, but Mahinda did.

Accordingly, the tax imposed on sugar imported to Sri Lanka from October 27 to November 13 was only 25 cents. However, since no other sugar importer was able to import sugar so quickly, the public did not get the benefit of the reduced tax and the sugar was sold at the same price as before. So those who imported hundreds of thousands of tons of sugar during that time, knowing that the price would be reduced, simply fell into their pockets. The government did not get that profit. The Ministry of Finance itself has admitted today that the lost revenue is Rs. 1590 million or Rs. 16 billion.

Even JVP leader Anura, who first exposed the scam in Parliament, said the loss should be around 11 billion rupees. But now it has been revealed in the Finance Committee that the loss is around Rs. 16 billion.

The huge tax revenue lost went into the hands of a handful of sugar importers, the main beneficiary being Sajath Mawsoon, a Rajapaksa business ally, chairman of the Shangri-La Group and Wilma Trading, the importers of sugar.

This is the biggest tax fraud in South Asia..

This is the biggest tax fraud currently committed in South Asia. Previously reported that it was the VAT fraud scam happened in Sri Lanka. Its value was Rs. 4 billion but the current sugar tax fraud is four times that amount.

It was the Central Bank bond scam chanted day and night, claiming to be the loss of revenue to the government which made to bring the Rajapaksas back to power. At present Alosious’s were sued for Rs. 6.9 billion only. Following the bond scam the Central Bank has withheld almost twice as much money from the Aloysious. In fact, the government already has twice much money as it lost. But this fraud is not so. This is a fraud that was allowed to take place with the direct intervention of Finance Minister Mahinda Rajapaksa. This is a day light robbery. Only Sajath Mawsoon and the Rajapaksas know how much out of this Rs. 16 billion was paid to the Rajapaksas.

Mahinda who dedicated his life to fraud should resign..

Mahinda Rajapaksa swindled tsunami funds even before he became the president. “I sent someone to the presidency who should be prosecuted. I'm sorry, I'm sorry, I'm sorry” Former Chief Justice Sarath N. Bandaranayake dismissed Mahinda over Tsunami fraud, Sarath N. Silva was later publicly acknowledged. Forbes magazine revealed that Mahinda had amassed $ 18 billion by embezzling public money from every transaction during his tenure as President. Even now on the verge of his life he allowed his cronies to exploit the public by losing a whopping Rs. 16 billion.

Accordingly, Mahinda Rajapaksa should accept the guilt of this massive fraud and resign from the post of Finance Minister and Prime Minister. The people must force him to resign.

Following the confirmation of this massive sugar fraud in the report of the Parliamentary Finance Committee, Nandasena Gotabhaya Rajapaksa is being referred to on social media as 'Nandaseeni'. If he is a white man, he should plead guilty to this fraud and hand over the post of Prime Minister and Minister of Finance to someone else. The 20th Amendment empowers Gotabhaya to do so. The government that is stripping naked now can barely cover up even if Mahinda's finance ministry is removed. If not, he is not really Nandasena but "Nandaseeni".