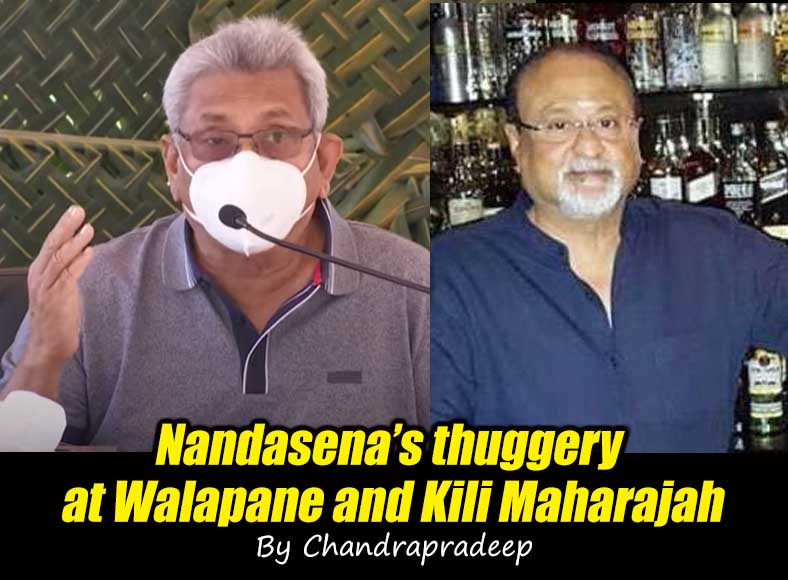 (Lanka-e-News -23.March.2021, 10.25AM) President Nandasena Gotabhaya Rajapakse posted a veiled threat to the media at the Gama samaga pilisandara drama held at Walapane on the 19th. He said that the information revealed by the media about the biggest environmental disaster in the history of the country spoken these days was untrue. The president also targeted Sirasa Media and its owner Kili Maharaja, another source of information on environmental destruction. He said the following.

“Nobody cried when Hanthana was cleared, media freedom does not mean the freedom of the person who owns the media institution. That is not what media freedom is all about. If it does it's a mafia. If the media owner is trying to run the country the way he wants, it is a mafia. That's what is happening now. There are no kings or maharajas in our country. The Maharajas were in India. The mafias of this country is going to control the country and the rulers here. They cannot do those with me. I know if I want to teach them lessons, I know how to teach them. I have given the media freedom. I ruled for 14 months. I have not exerted any influence on any media. But if they misuse it, there are laws to control those, there are ways to do it. I will activate them. Not only for that media but also some people in Jathika Chinthanay who spread false propaganda that some Kumbuk trees had been cut down, I checked who was it, I found that these are the media that worked against us during the war. They are the ones who have infiltrated a group and are now propagating these. Those who worked against us during the war are now back ... "

It is a well known fact that Nandasena Gotabhaya attacked and set fire to the Sirasa Media Institute with claymore mines while he was the Defense Secretary. After that, Sirasa Media used only a beep when the Rajapaksa name was heard and later invited Gotabhaya Rajapaksa to open the Sirasa Vesak Zone.

Many do not know the factual relationship between Killy Maharaja and Nandasena Gotabhaya gwhich goes back even further. Nandasena Gotabhaya resigned from the Army on November 1, 1991, saying that he should go abroad for the benefit of his children and family. Until his return to the United States, he worked as a manager for the Capitol Maharaja Group, owned by Kili Maharaja. The documents required for Gotabhaya to obtain a visa to the United States were prepared by Capitol Maharaja, with whom he had worked for about a year and a half. Gotabhaya received only a Military Clearance Certificate from the Army.

The end of rulers such as Nandasena..

Although we are not impressed with the media coverage of the creation and ousting of Kings by Kili Maharaja in obtaining and using public electronic frequencies, President Nandasena Gotabhaya, who is one of the most powerful dictators in the world today, should never succumb to the scourge of targeting the country's free media. All media should stand against this.

There are more than enough examples in history that the rulers who suppressed the free media eventually ended up in the sewers. If Nandasena Gotabhaya wants to know them he can also learn them from his media director general Mohan Samaranayake.