How the pride of the Rajapaksas were defeated in Geneva 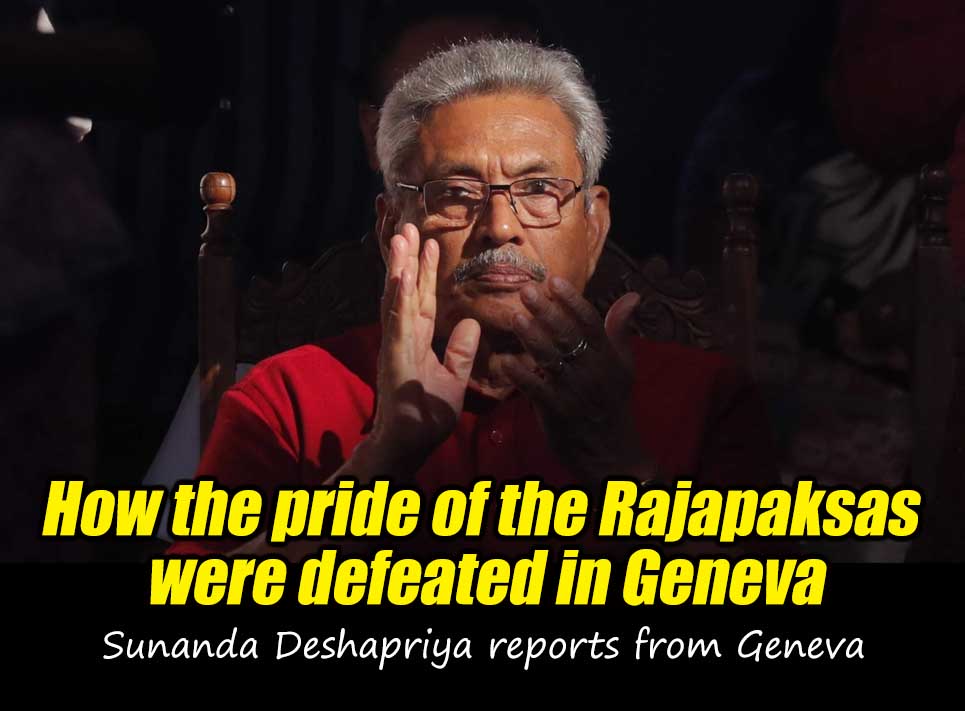 (Lanka-e-News -28.March.2021, 8.00PM) The Rajapakse government inflicted further defeats on Sri Lanka internationally. As long as the Rajapaksa governments lasted, the Sri Lankan government suffered defeats at the UN Human Rights Council in 2012, 2013 and 2014. Now it's the same situation has come again.

What has been defeated in Geneva now is the narrow-minded racism used by the Rajapaksas to come to power. Due of this ideology, the Rajapakse government in March 2020 kicked off the Sri Lankan government's agreements with the Human Rights Council, in other words, the international human rights community. Exactly one year later, the international human rights community has responded.

Idiotic statements of Kolambage and Chandraprema..

A day before the vote on the resolution on Sri Lanka, pro government's Lake House said the situation is favaourable to Sri Lanka so much so that Gotabhaya Rajapakse's foreign secretary, Admiral Colombage, said India had promised Sri Lanka that it would oppose the resolution. The result was that all the major political parties in Tamil Nadu immediately sent a letter to Prime Minister Narendra Modi quoting Colombo's statement. The letter called for a vote in favour of the resolution.

Sri Lankan Ambassador to Geneva Chandaraprema made even more short sighted statements. His articles in The Island are now being read at the Human Rights Council as the position of the Sri Lankan government. He continued to attack not only the West but also the Allies of the United States, India, Japan and Australia, known as the 'Quad'. Perhaps he feared that those countries would oppose the resolution for fear of his attacks.

Even more, Sri Lanka's ambassador to Geneva, Chandraprama, sought to attack the entire UN system. He argued that the High Commissioner is doing something beyond her mandate. Those arguments flowed out like raindrops on a lotus leaf.

At the very least, the ambassador failed to present any steps that his governments effort to protect human rights. It convinced member states that the Rajapakse government did not have such a program.

Wicked friends of the Rajapaksa government..

During the council debates, the Rajapakse government introduced to the world, its allied countries such as North Korea, Eritrea, Venezuela and Egypt which currently have some of the worst dictatorships. A country with such friends hardly needs enemies because then a hostile attitude will automatically arise.

South Korea, which normally abstains from voting, voted in favour of the resolution this time. Some of the Asian countries the Rajapakse government received support only from Pakistan, Bangladesh and the Philippines. Philippine President Duterte who publicly admitted that he shot and killed a suspect in the air is also a close friend of the Rajapaksa regime today.

Before the vote, Cuba, Pakistan, China, Venezuela and Russia spoke in support of the resolution on Sri Lanka. Out of these countries, only Pakistan and Russia have nominal or parliamentary democracies. But in both cases, the real power lies with the military.

In fact, Rajapakse's foreign policy is not non-aligned. It is an evil policy associated with dictators. It was that evil policy that was defeated in Geneva.

International Voice for the Human Rights of our People..

This resolution is not against Sri Lanka. This is an international voice raised for the human rights of the people of Sri Lanka. Two days before the motion was debated, Gotabhaya Rajapaksa said he knew how to teach lessons to the media who does not oblige him. There is no difference between that voice and the insulting mocking voice “who is Lasantha  .. .. .?”

On the same day that the World Human Rights Council passed a resolution against the Rajapakse government in support of media freedom and the rights of journalists in Sri Lanka, it was a historic surprise that six of Sri Lanka's leading media organizations issued a statement against Gotabhaya Rajapakse's media harassment.

The prediction made by the Human Rights Commissioner in early February about the repressive politics to take place in Sri Lanka is already coming true. Given the anti-human rights measures unleashed by the Rajapakse government in March, which held four rounds of discussions on the Sri Lanka resolution, this prediction seems realistic. But the Sri Lankan government continued to say that those predictions were wrong.

The Rajapakse government and its politics cannot comprehend the world politics displayed in Geneva. They will continue to embrace fierce dictators. In the next two years, Sri Lanka will become more internationally isolated. The consequences will be felt not by the Rajapaksa family but by the ordinary people of the country.