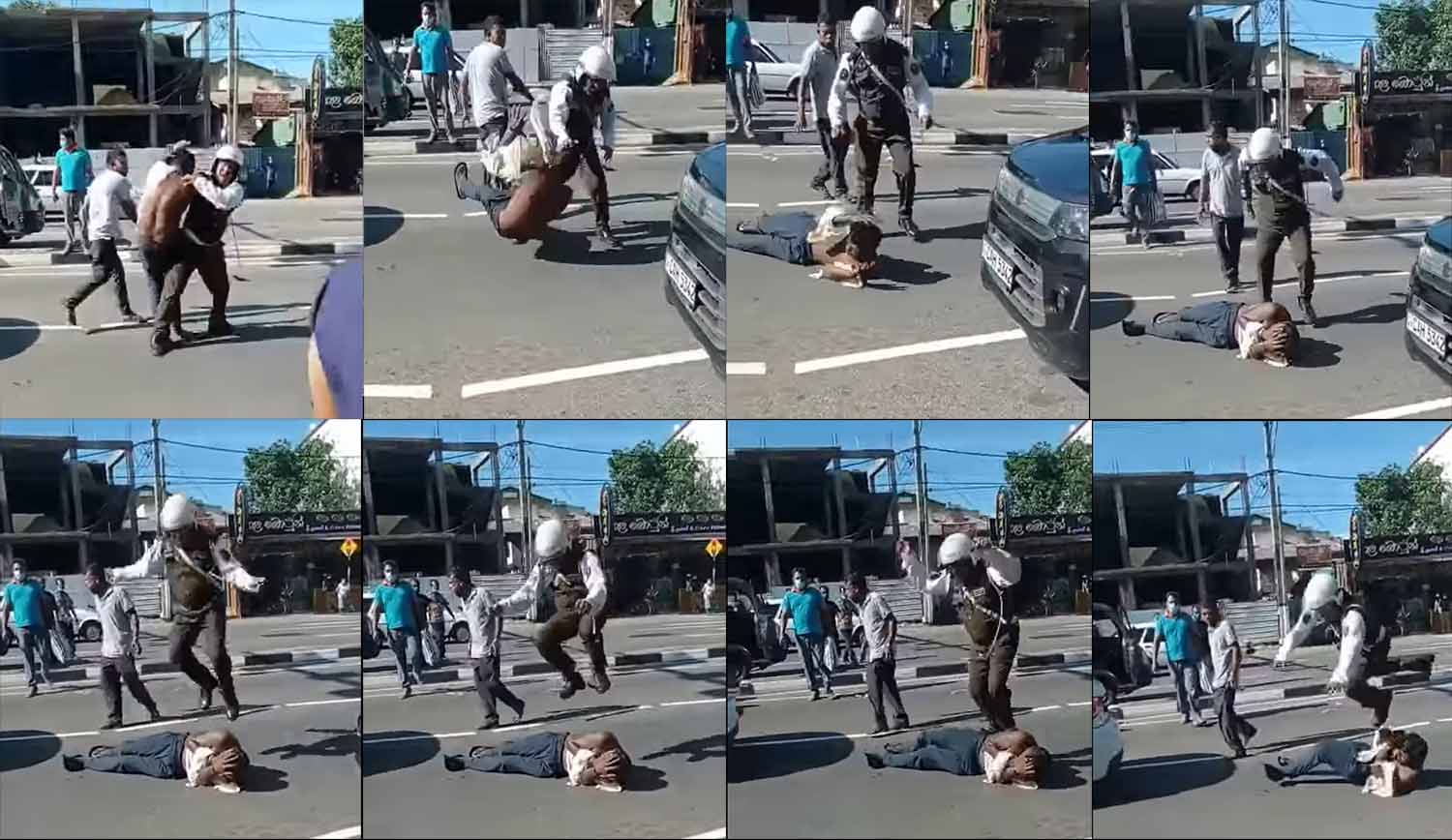 (Lanka-e-News- 31.March.2021, 1.00PM) A brutal attack by Police Officers caught on a video tape has gone viral on social media. It has caused expressions of public dismay about the levels of violence that Sri Lankan Police practice.

The video shows how a Police Officer jumps on the body of a fallen young driver and attacks him. Though, as an act caught on a video camera, this act of brutality may seem shocking. But, years of observing the practice of torture by the Sri Lankan Police clearly establishes this point. The practice of the cruelest form of physical attacks is routine practice in Sri Lanka.

While the protest against such Police torture is being talked about now, more than ever, the practice of torture has also increased, irrespective of such public criticisms. Consequently, looking into the kind of behavior that is demonstrated in this video requires much more than mere criticism of an individual officer’s behavior.

In fact, it is not even enough to see the responsibility for this kind of behavior merely as a result of a bad Policing System. It is worse.

This is a lunatic situation. If the Law Enforcement Agencies have become themselves like a lunatic asylum, where no system of hierarchical control could work, then the whole of society become victims of these mad people.

The leaders of the Government have the job to ensure well-functioning Law Enforcement Agencies. But, they have in fact, by their negligence, allowed such an enormous collapse of institutions. These organizations are essential for the establishment of a stable society.

Judicial System Reform, including the reform of the Policing System, is a dire need. It is concerned with the protection of the survival of people and orderly management of Society.

However, the problem is that there is no one to shoulder this responsibility. Leading politicians take advantage of the lawless situation. Their interests are to misappropriate national resources for their personal, private benefit. The link between organized crime and the political establishment is a matter that is commented on by many in the public a kind of a policing system, and a kind of justice system that has become dysfunctional.

The video that has gone viral should not merely be used for some cheap comments. A serious response should be expected from the State on the entirety of the collapsed justice system in Sri Lanka, including the Policing System.

Another feature of this incident is the mob violence used against the driver who caused the initial accident. Ever-increasing numbers of accidents, many resulting in deaths ( an average of 9 a day), have generated a mob mentality to punish the offenders. This is also is a result of people’s loss of faith in the capacity of police even to control the roads. Embittered and angered they take the law into their own hands.

Kindly see below an article that explains the brutal behavior of the Sri Lankan Police.