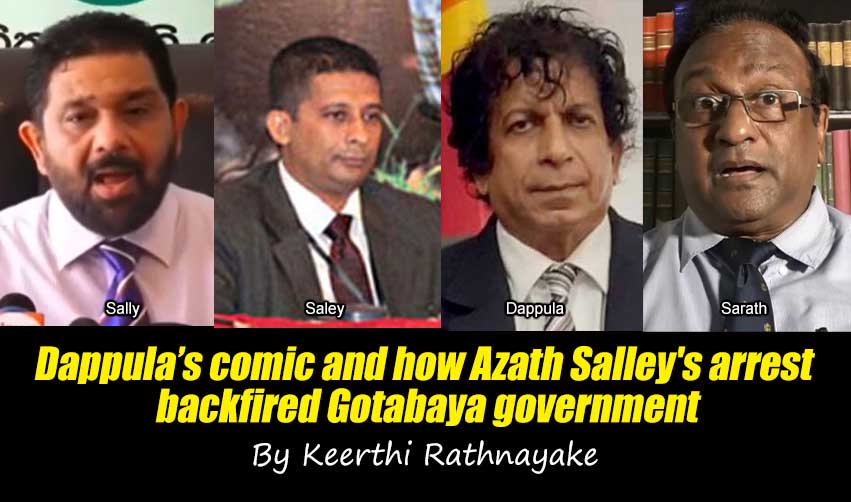 (Lanka-e-News -04.April.2021, 9.00PM)  It has been two weeks since Azath Sally was arrested. The statement "We will not change the Muslim law no matter who changes it" appeared to be the immediate reason for Azath Sally's arrest. Minister of Police Sarath Weerasekera also stated that he would arrest Azath Sally's based on his statement on Muslim marriage law. However, Attorney General Dappula was of the opinion that it would be a big mess if Azard Salley would be arrested for the statement he made under the ICCPR.

An audio recording of former President Sirisena claiming that Sarath Weerasekara is the one who demolished the Ampara mosque had been released to the media at that time. According to the audio recording, Dappula told Sarath Weerasekera that he would be arrested before Azath Salley under the ICCPR.

Why Azard Salley was arrested ?

Attorney General Dappula was of the opinion that instead of arresting Sally for his statement made on the Muslim law Sally could be arrested based on the Easter attack investigation report. When someone hears Sally's full press conference and say that he can be arrested according to those statements, he is crazy. As a result, Azath Sally was arrested on Dappul's instructions to question the Easter attack under the Prevention of Terrorism Act (PTA). He has been remanded in custody for three months. The Minister in charge of the Police has also appointed a special team to conduct investigations. However, the revelations about the Azath Sally Easter attack are now backfiring on the government. The statements he has made before the CID are outrageous.

The main allegation leveled at Azath Sally by the Presidential Commission of Inquiry into Easter Attacks is that he insisted for the release of Muslim youths arrested in December 2018 in Mawanella and Wanathawillu area. However the Gota government has fallen to a predicament due to the statement given by Azath Salley in this regard. Azath Sally has stated that he intervened for the freedom of some Muslim youths and it was Miflal moulavi who brought those youths parents to meet him. Miflal Moulavi is a collaborator with Basil, Gota as well as Director of State Intelligence Suresh Saleh. Azath Sally has also stated that he had spoken to the then President demanding the release of several innocent youths who had been arrested. He has also stated that after the Digana attack, President Sirisena gave him a decisive power over security.

Azath Sally pointed out that Abdul Razik's Tawheed Jamath, where the Buddha ate carcasses, is the home of Saharan. Salley has revealed that he has fought against the extremism of Razik and Saharan for the past two decades and it was Suresh Saleh who nurtured the extremists. Salley has stated that the CID should first question the lawyers represented the Mawanella youth who have received billions of rupees to their accounts and those money came from the political authority that dealt with Saharan. Azard Salley has asked the CID to look into what Miflal Moulavi, Lakshman Hulugalle and Basil did at the Pasikudah hotels in the Eastern Province from January to April, just before the Easter attack. Salley has given a list of pro Gota businessmen who had links with Saharan to be questioned. Thus, the arrest of Sally has now become a 'backfire' for the Gotabaya government.

Dappula is currently stuck in a dilemma. He has come to the edge of retirement, but the Attorney General's spokesperson lawyer Nishara Jayaratne, who has been Dappula's mistress for a long time cannot be taken home. Leaving her at office is also a problem because if he leaves her at office she would be alienated. So Dappula works day and night to get a service extension.

The black-coats who made deals with the Rajapaksas did not get much more than they did. Also, there was no one who took advice from Dappula and succeeded. Azath Sally, Ravi Karunanayake and Edirisinghe were arrested for Dappula's 'private matters' rather than legal or political motives. A large number of Muslims, including Azath Sally, lawyer Hijaz Hizbollah, social media activist Ramzi Razik and poet Ahnaf Jazeem, have been detained without charge under the Prevention of Terrorism Act. One day the citizens of the country, not Dappula or the Rajapaksas, will have to pay the price for these crimes.

On April 2nd 2021 a protest was organized against the illegal arrest and detention of Azath Salley. However, the organizers abandoned the protest after state intelligence Chief Suresh Saleh pleaded for Azath Sally's immediate release and for the protest not to take place. Azath Sally was arrested in 2012 on an order from Gotabhaya. The arrest was extended to the UN Secretary-General. At the same time, Suresh Saleh intervened and limited the three-month detention order to seven days and released Azath Salley. Azath Salley, who was released, did not hide in fear of the Rajapaksas. He carried out the Rajapaksa opposition with greater vigor. The international community will not accept when the Gota government claims that Azath Salley is a suspect for the Easter attack. The international community will not be a silent spectator. Their voices on behalf of Salley would be heard in the near future. That will be the day the Gota government who has already peed in their clothes in Geneva would excrete.