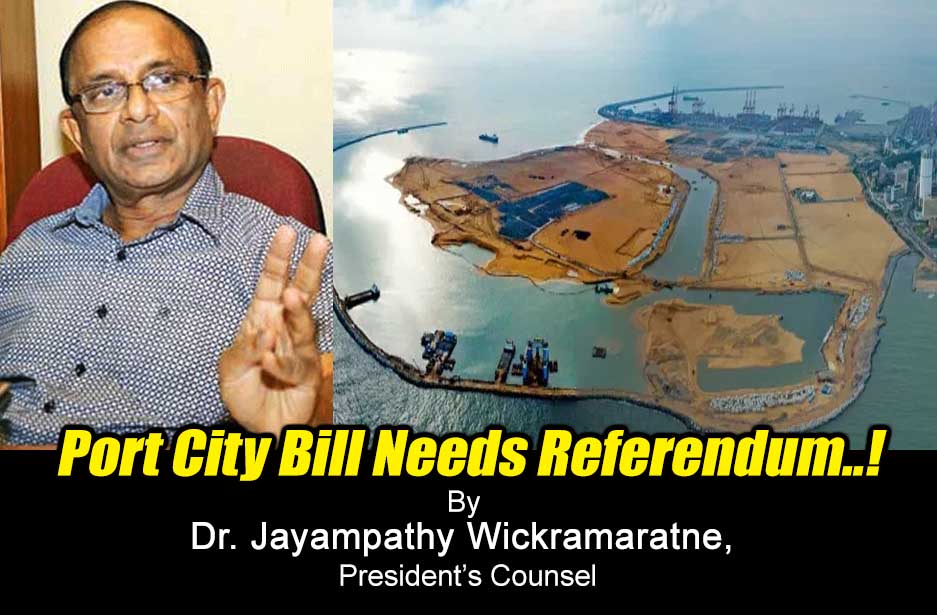 (Lanka-e-News -18.April.2021, 10.45PM) The Colombo Port Economic Commission Bill was presented in Parliament on 08 April 2021, while the country was getting ready to celebrate the traditional New Year. With the intervening weekend and three public holidays, citizens had just two working days to retain lawyers, many of whom were on vacation, and file applications challenging the constitutionality of the Bill in the Supreme Court within the one-week period stipulated in the Constitution. One wonders whether the timing was deliberate.

The Bar Association of Sri Lanka said in a statement that it was extremely concerned about the limited time given for scrutiny and discussion of this important Bill, as well as the timing of placing the Bill on the Order Paper of Parliament, which was after the suspension of sittings of the Supreme Court, a time when many members of the legal profession are unavailable. Because the period of one week within which the Bill could be challenged before the Supreme Court to determine its constitutionality, included not only the weekend but also three public holidays, members of the public have been deprived of a meaningful opportunity to scrutinise the Bill and to discuss its merits.

Special economic zones are common. They are created mainly to attract foreign investments. In return, investors are offered various concessions so that their products are competitive in the global market. Several negative effects of such zones have also been highlighted. The sole purpose of this article, however, is a discussion on the constitutionality of the Bill.

The Bill seeks to establish a high-powered Commission entrusted with the administration, regulation and control of all matters connected with businesses and other operations in and from the Colombo Port City. It may lease land situated in the Colombo Port City area and even transfer freehold ownership of condominium parcels. It operates as a Single Window Investment Facilitator for proposed investments into the Port City.

The discretion and powers of such other authorities under the various laws thus stand removed.

The Commission consists of five members who need not be Sri Lankan citizens, quite unlike the Urban Development Authority, the Board of Management of which must comprise Sri Lankan citizens only. One issue that arises is that the vesting of such powers upon persons with loyalties to other countries, especially superpowers, would undermine the free, sovereign, and independent status of Sri Lanka guaranteed by Article 1 of our Constitution. It would also impinge on the sovereignty of the People of Sri Lanka guaranteed by Article 3 read with Article 4.

The removal of the discretionary powers of the various regulatory authorities is arbitrary and violative of the right to equal protection of the law guaranteed by Article 12 (1).

Under Clause 26, only persons authorized by the Commission can engage in business in the Port City. Clause 27 requires that all investments be in foreign currency only. What is worse is that even foreign currency deposited in an account in a Sri Lankan bank cannot be used for investment. Thus, Sri Lankans cannot invest in the Port City using Sri Lankan Rupees; neither can they use foreign currency that they legally have in Sri Lanka. The above provisions are clearly arbitrary and discriminatory of Sri Lankans and violate equality and non-discrimination guaranteed by Article 12. They also violate the fundamental right to engage in business guaranteed by Article 14 (1) (g).

Under clause 35, any person, whether a resident or a non-resident, may be employed within the Port City and such employee shall be remunerated in a designated foreign currency, other than in Sri Lanka Rupees. Such employment income shall be exempt from income tax. Clause 36 provides that Sri Lankan Rupees accepted within the Port City can be converted to foreign currency. Under clause 40, Sri Lankans may pay for goods, services, and facilities in Sri Lankan Rupees but would be required to pay a levy for goods taken out of the Port City, as if s/he was returning from another country! The mere repetition of phrases such as ‘in the interests of the national economy’ throughout the Bill like a ‘mantra’ does not bring such restrictions within permissible restrictions set out in Article 15.

When the Greater Colombo Economic Commission (GCEC) was sought to be established in 1978 under the 1972 Constitution, the Bill was challenged. Dr. Colvin R. De Silva appeared for the Ceylon Federation of Labour. The writer who had hardly completed his first year at the Bar also challenged the Bill. The Bill provided that several enactments would not apply in the GCEC area. The Constitutional Court held that such exclusion violated equal protection and therefore required a 2/3 majority. J.R. Jayawardena, although he had a 5/6 majority, nevertheless amended the Bill at the Committee stage to fall in line with the Court’s determination. Under the 1972 Constitution, there were no referenda. But under the 1978 Constitution, a violation of fundamental rights consequently violates Articles 3 and 4 and a Referendum is needed. A seven-member Bench of the Supreme Court in the case of the Eighteenth Amendment Bill of 2002 and a five-member Bench in the Twentieth Amendment Bill in 2020 has confirmed this position.

Courts will be by-passed..

Clause 62 requires that all disputes involving the Commission be resolved through arbitration. The jurisdiction of Sri Lankan courts is thus ousted. In any legal proceedings instituted on civil and commercial matters, where the cause of action has arisen within the Port City or in relation to any business carried on in or from the Port City, Clause 63 requires Sri Lankan courts to give such cases priority and hear them speedily on a day-to-day basis to ensure their expeditious disposal. The inability of an Attorney-at-Law to appear before the court even for personal reasons, such as sickness, shall not be a ground for postponement. These provisions are arbitrary and violate Article 12.

Clause 73 provides that several Sri Lankan laws listed in Schedule III would have no application within the Port City. Such laws include the Urban Development Authority Act, Municipal Councils Ordinance, and the Town and Country Planning Ordinance. Under Clauses 52 and 53, exemptions may be granted by the Commission from several laws of Sri Lanka, including the Inland Revenue Act, Betting and Gaming Levy Act, Foreign Exchange Act, and the Customs Ordinance.

The Commission being empowered to grant exemptions from Sri Lankan laws undermines the legislative power of the People and of Parliament and violates Articles 3 and Article 4 (c) of the Constitution.

The writer submits that in the above circumstances, the Colombo Port Economic Commission Bill requires to be passed by a two-thirds majority in Parliament and approved by the People at a Referendum. Quite apart from the constitutional issues that arise, such an important piece of proposed legislation needs to be widely discussed. It is best that the Bill is referred to a Parliamentary Committee before which the public, as well as citizens’ organizations and experts in the related fields, could make their submissions.

(The Bar Association's protest letter is shown in the images below) 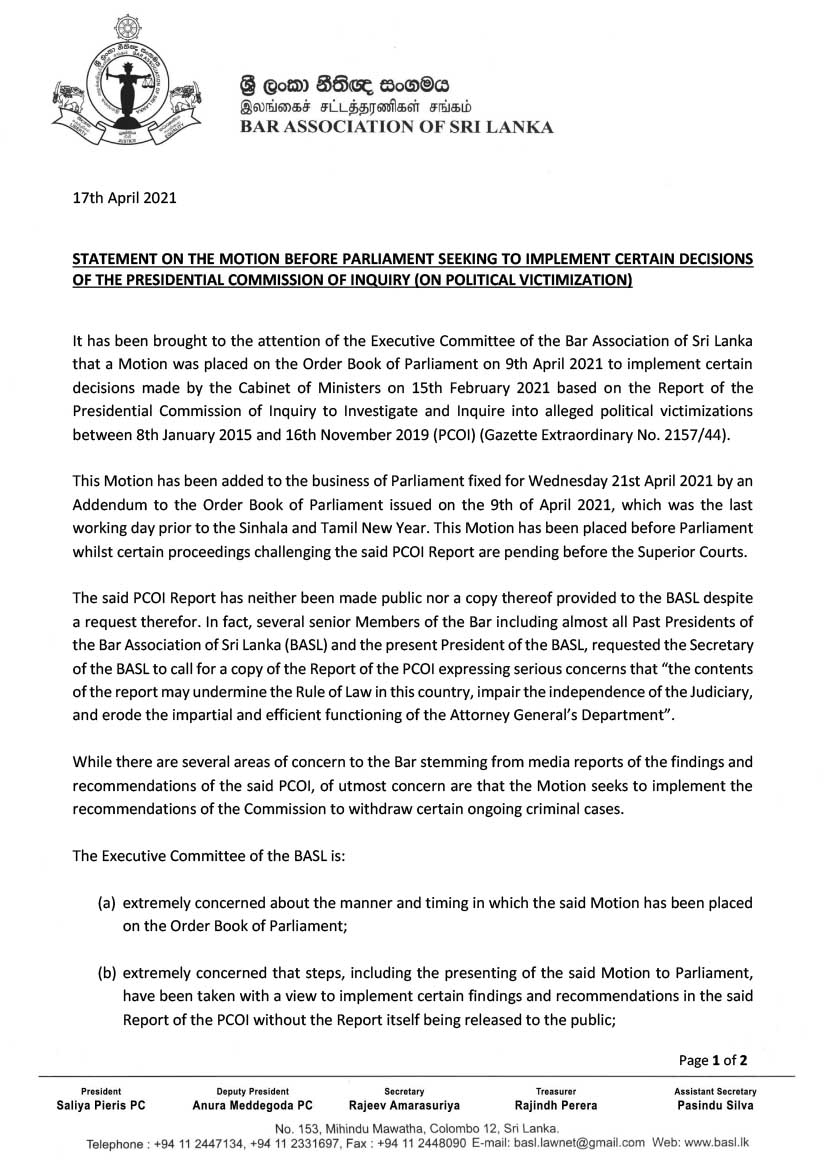 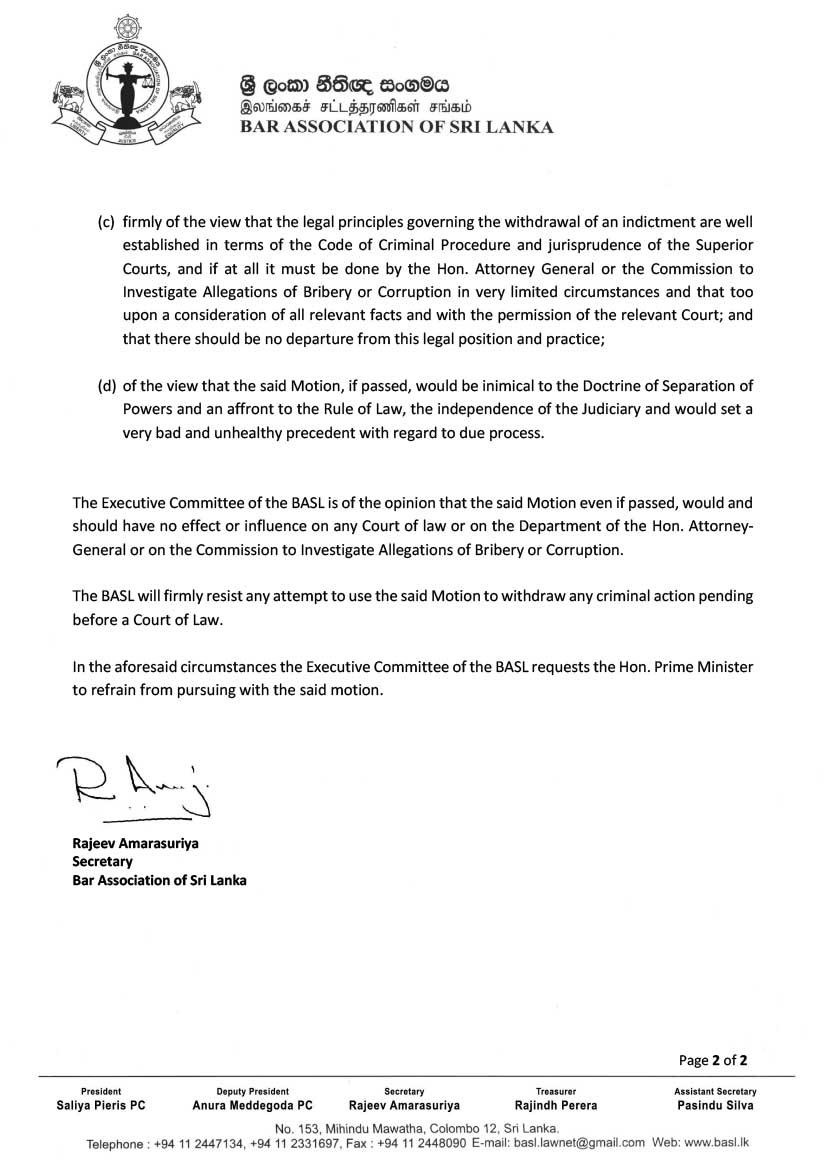