These are the masterminds of the Easter attack, the revelation made by Manusha at the parliament

On the second anniversary of the Easter attack 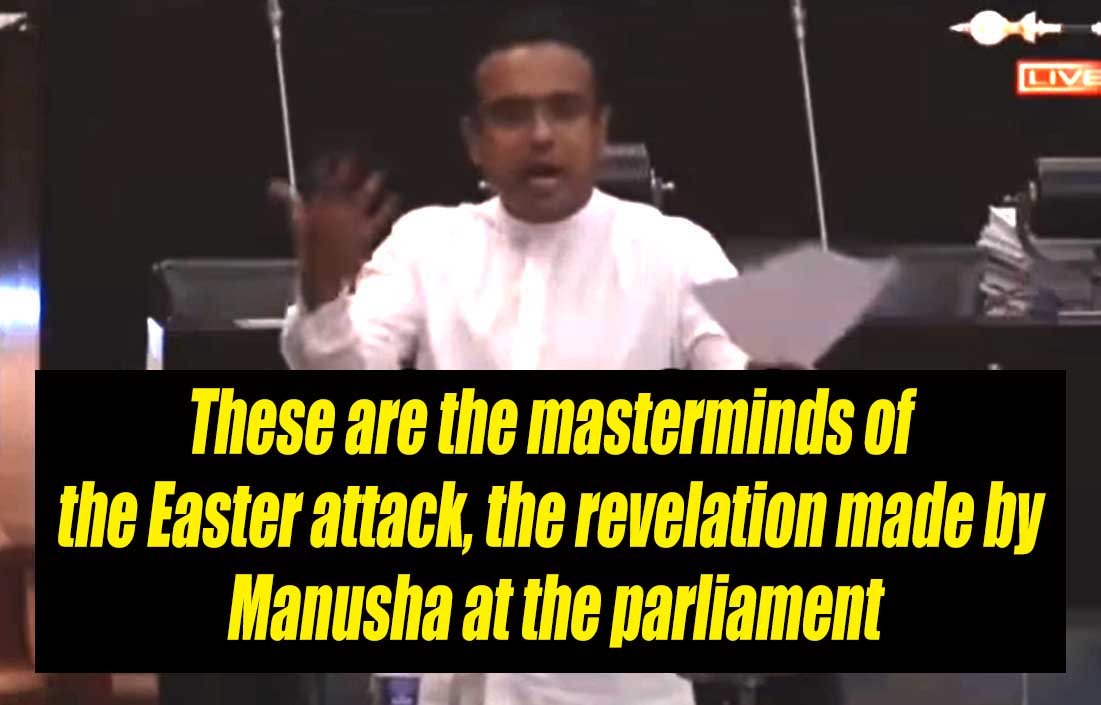 He pointed out the evidences presented in the Presidential Commission of Inquiry into the Easter Massacre was not included in the report and that it was the responsibility of all to find the mastermind behind the Easter attack.

The full text of Manusha's speech in Parliament is as follows.

"If anyone is interfering with what I am saying in Parliament today, it is those who are interfering and trying to prevent the revelation of those involved in the Easter attack. Now the government is trying to dump the responsibility of this attack to a chosen Moulavi. The real need is to find the real culprits involved in this massacre"

The Cardinal speaks differently in various occasions about the report of the Presidential Commission of Inquiry into the Easter attack. People have a reasonable doubt that a telephone call similar to the one received by MP Wijayadasa Rajapaksa influenced the Cardinal to change his opinion time to time.

Eater attack detonator Jameel who came detonate Hotel Taj Samudra, detonated his bomb at Dehiwala. Prior to the attack, two officers from the Intelligence Unit and the Terrorism Investigation Unit had visited the detonators house.  The two went to meet Jameel because they knew in advance that Jameel is involved in the attack. IGP Poojitha Jayasundara had stated about this in the presidential commission. Has there been an investigation into this?

Who was that code name 'Sonic Sonic' who met Mathale Zaharan..?

An army intelligence officer who was called by the code name Sonic Sonic had gone to meet Mathale Zaharan who has come from Qatar. He has questioned Zaharan why the ISIS leader Bagdadi delaying the claiming of the responsibility of the Easter attack. Until then the swearing had not come. From there a telephone call has been taken to Indonesia. Alright now we will release the video, only then ISIS head Al Bagdadi took the responsibility of the attack. These facts were revealed at the presidential commission to investigate the Easter attack.

There is no clear evidence about the woman named Sarah. Minister Sarath Weerasekara says that a DNA test should be done on her. At least 19 people were inside the Kattankudy house when terrorists carried out an explosion following the Easter attack. 16 of them died. Sarah's body was not among them.

The report of the Easter Commission has now gone to the Attorney General. The Attorney General is usually approached by police officers to provide the necessary support for the required lawsuit. However there are information revealed that a person who leads the army intelligence service to meet the attorney general every day. Why an army intelligence officer is going to meet the attorney general?

All these facts were revealed by the Presidential Commission. These were exposed in the commission before the lawyers but removing the journalists. Shani Abeysekara has been imprisoned now. The first intelligence information about the Easter attack was received on the 4th of April. By mid-April Saharan had receive a sum of Rs. 43 million. From this money Zaharan has distributed meat, bought arms and other equipments. But from 2014 Zaharan had been paid wages from the army intelligence.  Suspects who were arrested were taken away by the army intelligence claiming this is one of our projects.  There was a large network operating behind this.

If intelligence information was received on April 4th why these suspects were not arrested until the attack? We need to find out why this intelligence was not pursued. During this time, DIG Nalaka Silva had submitted a report to the Attorney General regarding Thawhid Jamath organizations. Meantime an advice has been sought regarding the arrests of suspects. But no answer has been received.

Serious concerns should be given for the arrest of Nalaka Silva who was investigating this. The fake complaint made by Namal Kumara accusing Nalaka SIlva for a conspiracy to kill the former president and the then defense secretary and current president Gotabaya which lead DIG Nalaka's arrest to halt the investigations. The Easter Commission obtained a testimony of Saharan's wife by removing the journalists. There is a serious question as to what was revealed by her. Why these facts were not exposed.

Boss is not happy about the delay of the attack The attackers have used a mobile application named Thrima for exchanging informations. The attackers involved in the Easter attack have divided into two groups three days before the attack. They were operating from two houses from Ja-Ela and Panadura. They have spoken saying that 'The boss is unhappy about the delay.' Boss has told to carry out the operation quickly. We should reveal who this 'Boss' is.

Who is this Boss?

We need to find out who this Boss is. Similarly, there are allegations that certain groups in the Army were involved in the assassination of Lasantha Wickrematunge and the attack on Keith Noiar. A question is raised as to whether any group outside the administration of the government supported these attacks. We need to look into this.

By this time a conflict had arisen between the military intelligence and the police intelligence. This conflict may have been the reason for the Easter attack. We do not point fingers at anyone but we need to find out who the real culprits are. Only then the justice be done to the dead. We speak in Parliament to identify who this Boss is. We tell these facts based on the evidence presented before the Easter Commission. We are exposing what has been presented as evidence but not included in the Easter Commission report.

Following is the video of Manusha Nanayakkara.