An exposure made by Keerthi Rathnayake 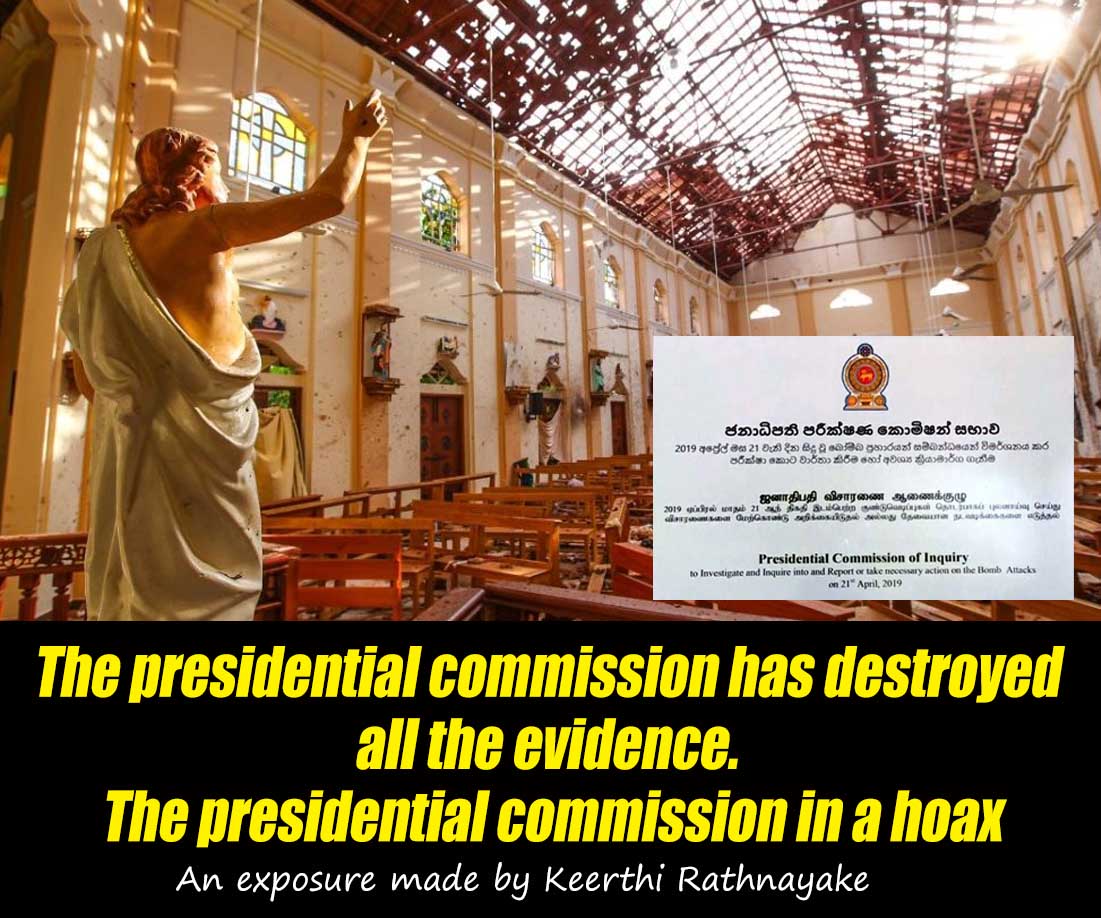 (Lanka-e-News -24.April.2021, 7.10PM) The Easter attack massacre turned Sri Lankan politics upside down. Before the blood stains became dry Gotabaya Rajapaksa without the consent of Pohottuwa stated that he would contest the 2019 presidential election. People hoped that if Gotabaya becomes President, the roots of the IS terrorists would be crushed. People thought that those who instigated Muslim extremism would be punished regardless of rank and that all the hidden agendas of the mystery Easter attack would be uncovered. The people hoped that not only would Muslim extremists be given maximum punishment, but a greater social transformation would take place in society.

The people, shocked by the Easter attack, blindly took refuge in Gota. Although no one saw who tied the gun (the one who detonated the bomb) the general public did not believe, the hunter would be revealed when the hunt (Sinhala votes) ends. There is no other media institution that has written articles revealing the truth about the Easter attack as much as Lanka e News.

What we revealed was strong, but it was not well recognized. For example, we revealed that a false flag operation going to be carried out under the label of Islamic extremism on January 22, 2019, exactly three months before the Easter attack. (Read that article at this extension https://www.lankaenews.com/news/8840)

Doubt arose among the people about Gotabaya..

The Easter attack was the most attractive "trailer" on Gotabaya's election platform. But the promises made by Gotabaya following coming to power could not be fulfilled. Two years after the Easter attack, the command line of the IS in Sri Lanka has not been revealed. No information revealed about how the terrorists got the weapons, explosives and the technology. No information discovered how the explosion took place. No information about foreign organizations or individuals who gave support to the Sri Lankan IS extremists. None of the masterminds of the terrorist network that carried out eight attacks on the capital have been arrested. It is obvious to any idiot that arrested Azard Salley is a political activist but not an IS member. As a result, there was a suspicion among the people whether they were being brutally deceived by Gotabaya.

How Gota destructed the presidential commission appointed to investigate the Easter attack..

The brutal conspiracy to inquire his own allegations..

The six-member Presidential task force appointed by Gotabaya was an exorbitant one. Everyone on that committee were serious suspects of the Easter attack.

It was one person who heads the National Intelligence Service, the Chief of State Intelligence and the Chief of Army Intelligence. That is Suresh Saleh. Suresh Saleh has serious allegations regarding the Easter attack. According to Keheliya, when Saharan was being paid by the military intelligence, Saleh was the head of the intelligence unit. When Gota came to power, both CID and the TID were turned by turn administered by SSP Prasanna Alwis and SSP Nihal Thalduwa. Both of them are two main characters in Namal Kumara's play. It was these two who imprisoned Nalaka Silva who followed Zaharan.  It was Prasanna Alvis and Nihal Thalduwa who prevented the arrest of Zaharan. Prasanna Alvis and Nihal Thalduwa both should not be above the presidential commission which investigates the Easter attack but in the Welikada prison.

The legal division of the police is headed by the notorious 'black son' SSP Ruwan Gunasekara. He was the head of the Police Media Office during the period of good governance. According to former IGP Poojitha, the Easter attack warning letter has also been sent to the police media office. But Ruwan Gunasekara has ignored the letter. So he is also an accused. It is a tragedy that the Presidential Commission appointed to prosecute the perpetrators who are involved in the crime. This is a blatant violation of the first principle of natural justice, 'No one can be a judge for his own case'.

The most despicable presidential election campaign in Sri Lankan politics..