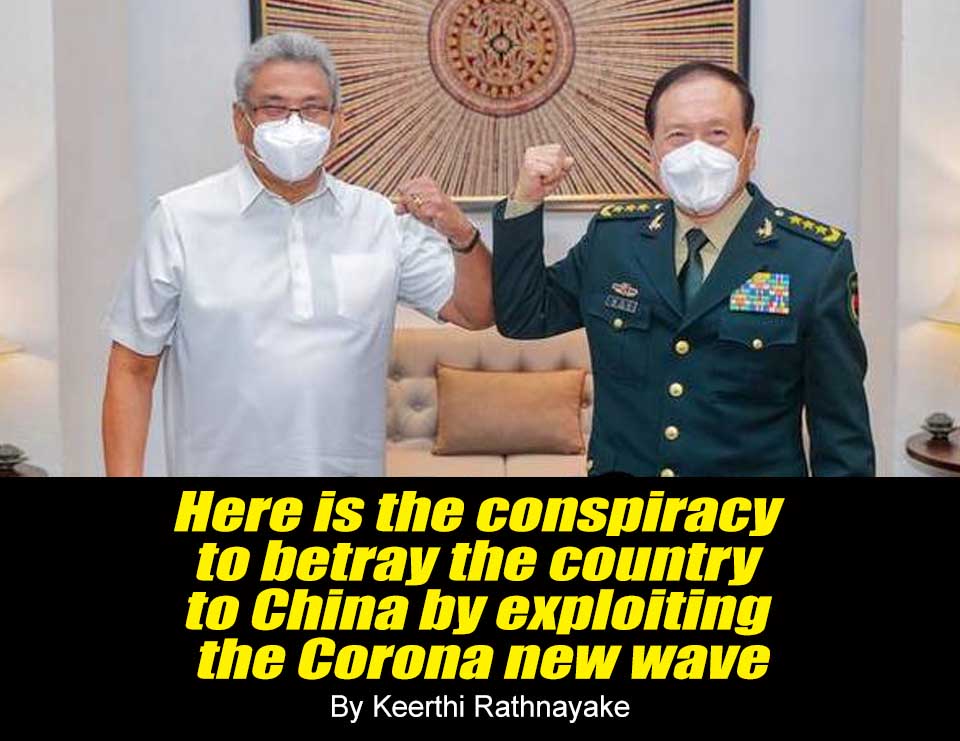 (Lanka-e-News -02.May.2021, 6.30PM) The Gota's government which has claimed falsehood as its religion, trying to win covid by applying deceptions is moving the country towards a disaster. The Gota's government is indulging in this bestial project these days by selling the tears of the Indian people suffering form the covid pandemic. The pro Rajapaksa media is also writing essays throughout the day about the Corona situation in India. The Corona catastrophe has become the mainstream news in the Derana and Hiru media double. The Gota's government tell the people of the country to look at the people dying in India which is not happening in our country, therefore people should be happy about the situation in the country. Selling the Indian tears

It is not surprising that a country like India, the second largest..

Population of the world, a country in the world where more slums and shanties exist, to suffer from an epidemic. We can find the population of Sri Lanka in one city in India. Comparing such country with a small country like Sri Lanka is a stupid non mathematical approach. In that case it is not a lie that most of the professionals in the Wiyathmaga are failed in Mathematics. Psychologically it is a serious crime to show the status of an informal country like India and to fear the people in Sri Lanka. However marketing the tears of India has become the new game of the Gota's government.

Hiding the winning Vietnam and showing the defeat of India..

It is extremely important to be equipped with positive thinking in any battle as well as in the fight with a plague. If the president was trained in the army I am afraid this lesson could not be forgotten. No defeated videos of wars and dead bodies of soldiers are shown when training and sending soldiers to an operation. Videos of malicious tricks and bold army operations are shown to soldiers who go for battle fields. Vietnam is a country close to Wuhan China that has been successful in combating with Corona. Number of infected people are less than 3000 and only 35 deaths reported. By showing the defeated India and hiding the winning Vietnam shows that the president has forgotten the fundamental letter “A” in war front.

Can we be the best in the world by showing mathematics and numeric?

It is so unfortunate for the people of Sri Lanka to choose a ruler whose family faith is fraud and corruption. Now the time has come to the people to pay the penalty for the massive error made. President thought that he could be the best leader in the world to defeat Corona as a college student changes his marks of his class progress report. A villager complained the president that there is no Corona testing facilities in his area. The president said gave an exorbitant answer that Corona testing is not necessary now due to the starting of the vaccination. President would have thought to reduce the infections and deaths by discouraging the Corona tests. There is no country in the world which can control the epidemic by manipulating the figures.

Almost every country in the world launched a special program to protect its people from the Corona. Increasing of ICU beds, ICU equipment and trained nursing staffs, increase of PCR and Antigen tests. Health workers were equipped with special clothing and increased other facilities but Gota regime did the opposite. Only 18 intensive care beds were added to the national health system. PCR and Antigen test were discouraged day by day. The regime not increasing the health facilities during a global epidemic allocated budget for the purchase of four MI 171 helicopters for the air force and 60 BTR armoured vehicles. Despite bringing PCR and antigen kits Gota brought equipment to test the alcohol intoxication for drivers. Amid the increase of the new Corona wave instead of taking advice from epidemiologist Gota appointed radio and TV media henchman to his media unit to boom his image.

1.      Why Corona intelligence operation which followed the Corona carriers were stopped?

2.      Why the poor foreign domestic worker were ripped in guise of  quarantine for 14 days in hotels.

3.      How much the amount of commission earned by the chief of corona task force army commander Shavendra Silva.

4.      If Gota say the vaccination is the only solution why did the state-sponsored Dhammika peni drama and floating pots in the rivers staged.

5.      Didn’t the red warrant Udayanga Weerathunga spread Corona under the guise of a tourist bubble?

6.      Isn’t quarantining Indians within the country is waving hands for Corona?

7.      Where are the ICU beds made by Wimal Weerawansa? What happened to the Cowid Fund? Where is the budget report?

8.      There are only 581 ICU beds available. Only 104 beds are allocated for covid patients. Why no efforts were made to increase the ICU beds during a plague.

9.     Aren’t you the only world leader who showed a wrong precedent to the people by jeopardising the lives of the people gathering them stating a “meeting the villagers”?

10.     The health authorities told to impose regulations for the Hindu Thamil New year, Didn’t you ignore them?

12.     Aren’t you the only world leader who offered the import of the sanitizer, antigen kits, face masks and the quarantine related transactions to your corrupt gangs and made use of the Corona to rip of the poor people.

13.     Who instructed the PHI to immediately stop the antigen tests on the 29th of April? Who bears the responsibility of the loss of lives?

A conspiracy is underway to betray the country by exploiting the new Corona wave..

High commission information has reported that China and the Rajapaksa government is preparing for a geopolitical conspiracy by exploiting the Corona epidemic. That was the reason for the urgent visit of the Chinese defense minister.

By today due to the hospitals exceeding infections, the lack of beds, the absence of oxygen, shortage of clothes to hospital workers, sick are unable to go to hospitals. If this situation continues Sri Lanka will fall to a situation like India.

When the people of Sri Lanka start to fall in the streets and die, a Chinese ship will continue to come to the country carrying ICU beds, oxygen generator tanks, chinses doctors and health workers from China. By now China is loading the goods to the ship. The effect of the Indian 'Suwaseriya' will subsidise.

When the country is poured with Chinese aid the Chinese - Rapaksa junta would complete a number of pro Chinese friendly deals. A pro Chinese attorney general would be appointed to approve the deal. Despite several warnings made by Sri Lankan specialist doctors, no action has been taken is to pave a way to function this conspiracy.