Universities and higher education are going to be militarized in the name of national security..! Citizens, wake up..! 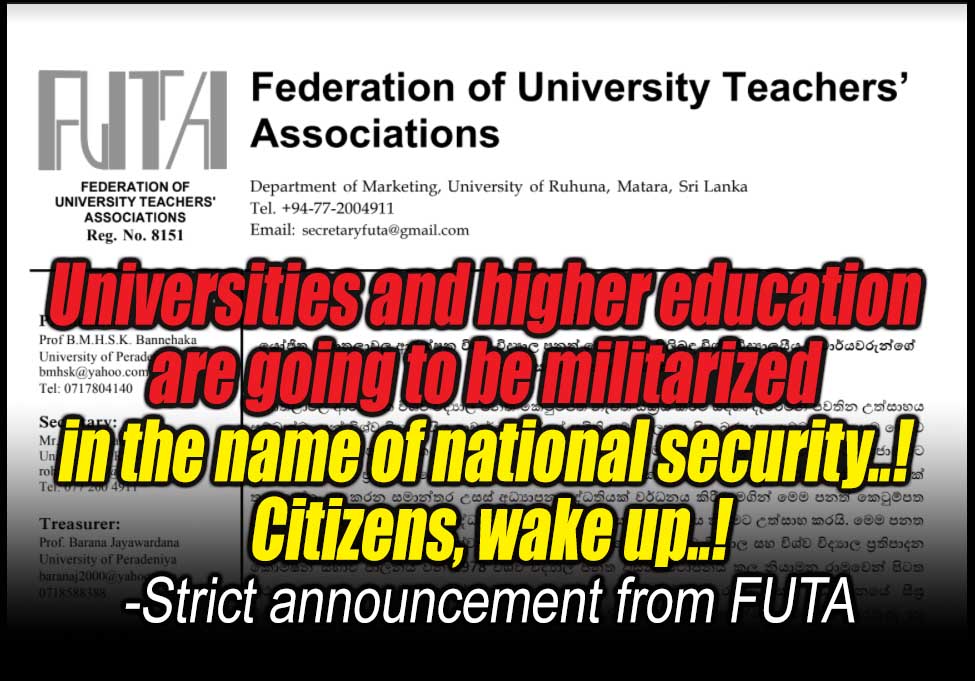 (Lanka-e-News-07.May.2021, 4.35 PM) In the name of national security, a bill called 'Kotalawela National Defense University Bill' is to be introduced with the aim of militarizing universities and higher education. Explaining its danger, the Federation of University Teachers' Associations (FUTA) calls on all faculty, students, civil society and citizens of the country to oppose it. The full text of that announcement as follows.

The Federation of University Teachers Associations (FUTA) notes with grave concern the current moves to resurrect the Kotalawela National Defense University (KNDU) Bill. This Bill was first proposed in 2018 and the Sri Lankan academic community expressed its strong opposition to the bill at the time. The KNDU bill threatens to fundamentally change the state higher education landscape in the country by creating a parallel space for fee-levying higher education driven by a highly instrumentalist and military-style decision-making framework. According to the KNDU Bill, the KNDU will be paced within a regulatory framework that exists outside the Universities Act of 1978 under which all state universities and the University Grants Commission (UGC) operates. If enacted, this bill pave the way for the rapid militarization, commercialization and decline of quality, standards and fundamental goals and objectives of university education in the country.

Under the Universities Act of 1978 universities are set up as institutions with a highly democratic system of governance that follows a bottom-up approach that enshrines the vital principle of academic autonomy. Under this system academic decision making begins at the department level, moves through faculty, senate and council levels and ultimately to the UGC and also to the relatively recently introduced Quality Assurance Council  (QAC). This ensures that the content of academic programs, admission criteria, program objectives and all other academic activities receive input from the widest possible stakeholder group. This leads to academic decision making which is egalitarian and not driven by narrow or utilitarian goals.

In contrast, the KNDU bill envisages a highly arbitrary and top-down system of decision making with direct political intervention at the ministerial level. The Board of Governance proposed by the Bill has wide ranging powers and will essentially create a parallel University Grants Commission-style entity that will not simply be confined to managing the KNDU but has the ability to limitlessly expand the KNDU model of feel levying education within the Sri Lankan higher education landscape. The Bill also directly places management of the university under the Ministry of Defense and not the Ministry of Education and Higher Education.

The KNDU was originally envisioned as a military academy but what is now happening and what will happen more aggressively and systematically if this bill is enacted is that the KNDU will extend its military-style of university education to the entire civilian population of the country as well. This has major negative impacts for a society like Sri Lanka which has long-standing traditions of participatory democracy. Under the planned KNDU bill the Defense Minister along with an apex body of military personnel will be able to decide on the nature, content and all other aspects of academic programs.

This will leave significant portions of key stakeholder groups outside the decision making process and decisions will likely reflect an extremely utilitarian military outlook on society and life. This contradicts the globally accepted norm of the university as a space of critical thinking and replace it with a military-culture where orders are expected to be carried out unquestioningly.

FUTA identifies the following specific provisions of the Bill as being particularly detrimental to the future of university education in Sri Lanka.

1. The KNDU Bill if enacted will create a parallel university governance structure with the following negative features:

Part I – 2(1) of the new Bill describes the KNDU as a university not governed by the 1978 University Act and hence an institution that is outside the purview of the UGC. According to the new Bill KNDU is not just a university established to serve members of the armed forces but to serve anyone (i.e. to serve officers of the armed forces, government servants and others – Part II – 4(b)). The Bill grant rights to the KNDU to admit students (Part II – 5(a)), to decide entry qualifications (Part IV – 19(a)), to maintain its own academic quality (Part IV – 19(b)), to charge fees ((Part II – 5(i)), to award degrees (Part II – 5(g)) and to invest profit in any business considered suited by the administration of the University (Part II- 5(y). The awarding of degrees by the KNDU is not confined to the students following programmes offered by the KNDU itself but to students following programmes offered by any other institute established and affiliated to the KNDU through this Bill (Part II – 5(g), 5(o), 5(p) and 5(q)).

2. The militarization of university and higher education in the country.

KNDU does not fall under the purview of the Ministry of Higher Education, but under the Ministry of Defense. The Minister of Defense is responsible for the implementation and the administration of this new Act (Part III – 6(1)). The Minster of Defense is empowered by the Act to issue orders to the apex administration body of the University (i.e. the Board of Governors) and the said body is bound by law to obey orders given by the Minister (Part III – 6(2), 6(3)). The CEO of the KNDU, the Vice Chancellor, is a senior officer of the armed forces (Part IV – 10(1)). The Board of Governors of the University which is responsible for a range of most important functions (that currently come under the UGC in terms of the 1978s University Act) consists of the Secretary to the Ministry of Defense, Additional Secretary of the Ministry of Defense, Head of Staff of the Armed Forces, the Army Commander, the Commander of the Navy, the Commander of Airforce, the Vice Chancellor of the KNDU who himself is a senior military officer, a nominee of the UGC and a nominee of the Secretary of the Treasury (Part V – 18(2)). Everything ranging from deciding entry qualifications of students, the minimum qualification of academic and non-academic staff, the quality assurance to decide and establish affiliated institutions to award degrees are responsibilities of the Board of Governors consisting almost exclusively of senior military officers. This will lead to a university culture that contradicts the classical norms of university education as a space of critical dissent and replace it with a top-down military culture.

3. Provision to suppress dissent in the name of national security.

Part III – 7 of the Bill demands the Board of Governors to take all such steps he may deemed necessary to control a situation which in the opinion of the Minster of Defense has the potential to endanger national security or is detrimental to national policy (the Bill does not say which national policy) or lead to situations that disrupt the smooth functioning of the university.

According to the Bill any situation that could endanger national security or affect national policy or the day-to-day activity of the university in the opinion of the Minister is confined to what happens within the university.

However, the term “all such steps necessary” grant wide powers to the Board of Governors consisting of top military men and extend well beyond the premises of the university. This can lead to a situation where this Bill is used to stifle rights movements in society at large by interpreting such movements as detrimental to the functioning of the university. The Minister’s opinion is adequate to justify such an interpretation.

Given this situation FUTA calls upon academics, students, civil society, and the citizens of this country to rally to defeat this dangerous attempt to bring university and higher education under military control and to open the floodgates to loosely regulated private higher education.