Can Rajarathnam transform the AG Department which was made to a brothel show piece by Dappula? 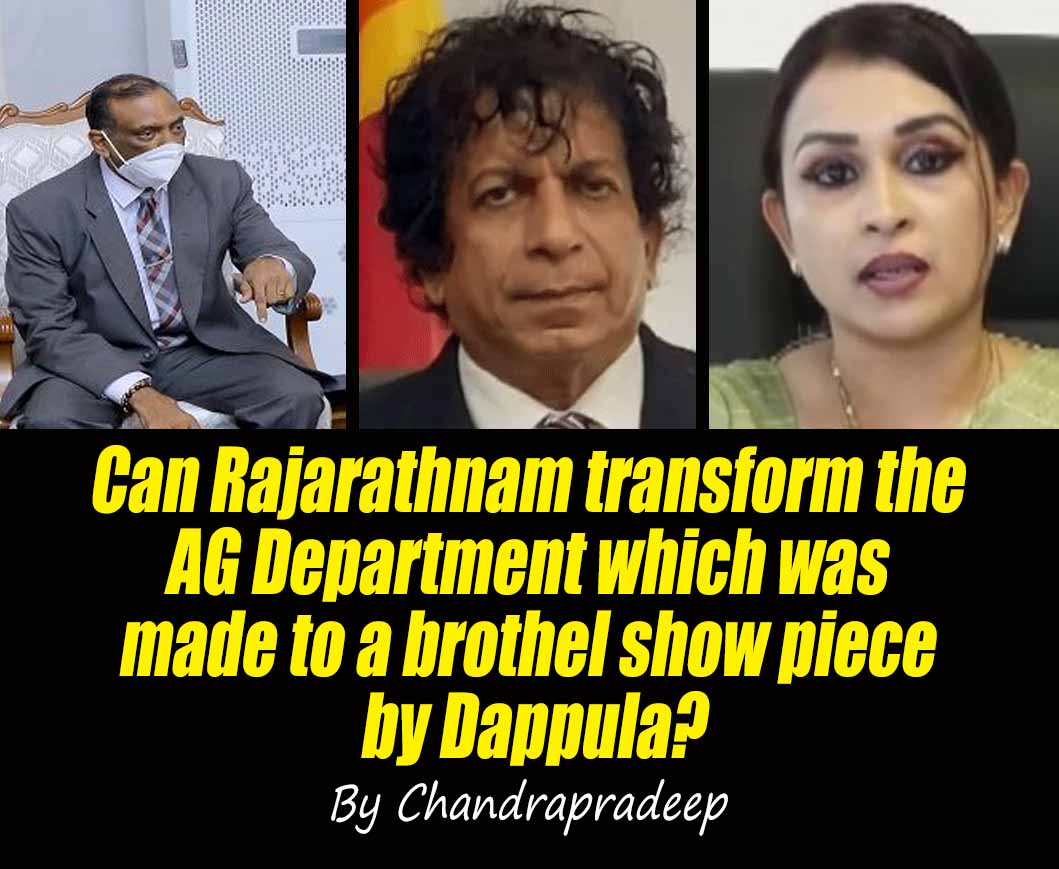 The Bribery and Corruption Commission should investigate Dappula...

Former Attorney General Dappula had appointed Nishara Jayaratne as the Presidential Coordinating Secretary to the Attorney General in addition to the above post and another female brothel of Dappula, Induni Punchihewa too was appointed as the Prime Minister's Coordinating Secretary to the Attorney General. All these appointments are not in accordance with the standard appointment procedure. Therefore, the Bribery and Corruption Commission should investigate Dappula de Livera and enforce the law against him.

Where is the money collected for the “Rays of Hope”..

Former Attorney General Dappula provided everything what Nishara Jayaratne needed by the Attorney General's Department. Under Nishara's direction, he organized a concert called 'Rays of Hope' to raise funds for the victims of the Easter bombings, blatantly violating the department's traditions and circulars. For this purpose, money was forcibly deducted from the salaries of the State Counsels of the Department and they were forced to participate. Many professionals, including high court judges, decided to boycott this illegal polygamy but Nirasha threatened all officials to attend. Ultimately no one knows what happened to the proceeds from this concert.

Dappula de Livera did not send Nishara beyond Colombo city limits but facilitated her legal advice in every court case in violation of the circulars. She had no ability to provide such legal advice, even for very minor cases. As a result, many high court judges expelled her. Nishara never filed her legal advice, but because of her relationship with Dappula, the supervisors were unable to say a word against her. During the Corona lock down, Nishara ran a small restaurant in the department and used the department's official WhatsApp group to advertise about her restaurant.

How Dappula turned the Attorney General into a party office..

The new Attorney General has the opportunity to change Dappula's transformation of the Attorney General's Department into another government corporation or branch office of the ruling political party. It is unknown what capacity and opportunities he must have to do that.

Dappula's case was well received by a panel of judges comprising Aditya Patabendige, Manjula Tilakaratne and Mahen Weeraman on May 21st acquitting the accused in the Avant Garde case. The judges said it was wrong to arrest someone based on suspicion alone and that the attorney general should be more careful when prosecuting a defendant. They also pointed out that otherwise no one would be able to compensate the defendants. This should be considered by the three-judge panel as a blow to the Attorney General. We do not know the names of three judge panel who have previously stated this against an Attorney General.

Dappula's lawsuit is a political show..

Dappula's lawsuit was a purely political show. Lanka e News was the first to expose Avant Gardes illegal floating armoury. At the same time, the company's officials presented to Lanka e News a document certified by the security council of the united nations authorizing them to maintain an arms depot at international waters, saying it was not illegal. When we inquired from the United Nations about the authenticity of that document, they confirmed that it was their official document. Lanka e News then wrote about Avant Garde's other political activities, but did not go so far as to say that the floating arsenal was illegal.

Dappula, as an attorney general, should also be aware that the United Nations Security Council will not issue such a certificate to an international maritime security company employing about 4,000 people if it possesses illegal weapons because the document presented to us by Avant Garde was subsequently published in various media.

The other point taken into account in the Avant Garde case was that they first obtained the permission of the Secretary of the Ministry of Defense to possess firearms in the maritime defense campaign and then continued to be updated by six other different Defense Secretaries after the return of the Good Governance and the return of Gotabaya. How did the Attorney General Dappula unable to comprehend why six or seven defense secretaries and three governments allowed these illegal firearms? Didn't the Attorney General know that this was a very weak case to start a lawsuit?

But Attorney General Dappula made a Guinness World Record against 13 defendants in the Avant Garde case, bringing the total number of indictments to 7573. Later the indictments were reduced to 19 charges. Does anyone need more examples to say that Dappula's lawsuit is a political show? Now, similarly, 800 charges have been filed against former IGP Poojitha and former Defense Secretary Hemasiri for failing to prevent the Easter bombing. It is not yet known how much it will be reduced to next. These are Dappula's spectacular shows only. He turned the Attorney General's Department into a joking institution.

AG department is a platform which shows spectacular pageants..

Thus, it is obvious to anyone who looks at it objectively that the current Attorney General's Department has become a scapegoat for showcasing political interest to successive governments in power. It is clear that the acquittal and release of the accused in the political cases is not due to the discrepancies of judges themselves but due to the spectacular show cases of the Attorney General. Accordingly, it is the Attorney General's Department itself that has given the infamous thieves the opportunity to save themselves by claiming that these are political revenge.

Writer Shakthika Sathkumara, who was later acquitted, was remanded for about a year, but Shani Abeysekera is still being held in custody today because the Attorney General's Department has become not an independent department but a corporation or a party office of the ruling political party. A reputed detective who has been working in collaboration with his department for more than three decades is in remand custody as no one from the Attorney General Department appeared on the dates relevant to his bail application. Accordingly, the case is adjourned. Shani, who also suffers from a heart ailment, is still in remand custody. These are the deliberate nefarious work of the Attorney General's Department.

Another strong piece of evidence that the Attorney General's Department is a party office.. 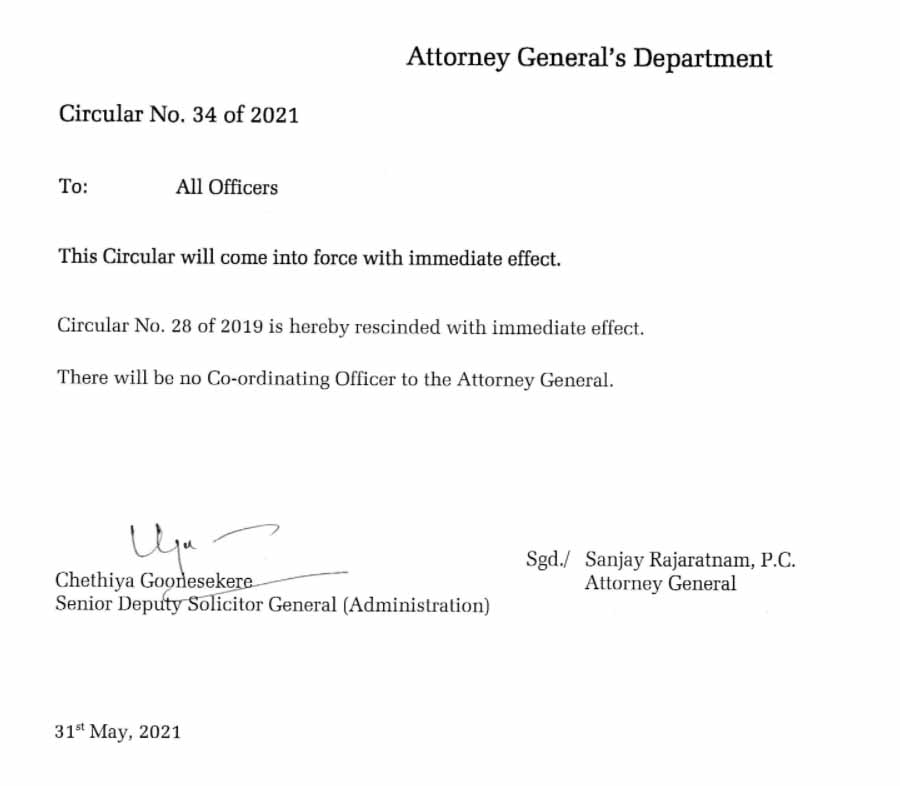