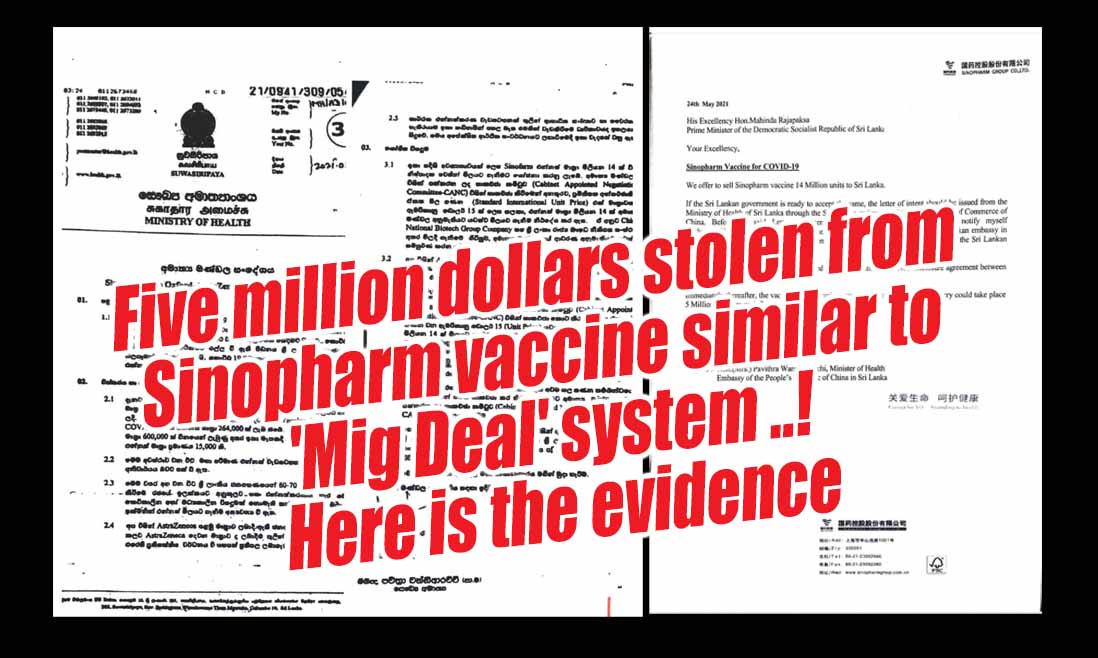 (Lanka-e-News - 06.June.2021, 11.30PM) A fraud of five million dollars has been committed in bringing the Sinopharm vaccine to Sri Lanka. This fraud has been done through the State Pharmaceutical Corporation with the direct knowledge of the Chairman of the Pharmaceutical Corporation Dr. Prasanna Gunasena. When Pakistan and Bangladesh buy a vaccine directly from the relevant company for ten dollar each, the vaccine comes to Sri Lanka illegally. This has been brought to Sri Lanka in the same manner as the Mig aircraft.

When alleged against the purchase of this Sinopharm Dr. Gunasena initially said that the vaccine procurement process was highly transparent. "The World Bank and the Asian Development Bank (ADB) are assisting in the procurement and the monitoring the process," he said. But this is an oracle system subterfuge.

Sinopharm vaccine is manufactured in China by China National Pharmaceutical Group Co., Ltd. The company has five five subsidiaries. They are,

None of the above six companies has so far sent a Letter of Intent (LOI) to the Pharmaceutical Corporation and no agreement has been reached. However, through the People's Bank, the pharmaceutical corporation has made a telegraphic transfer of 15 million dollars to an intermediary company called Beijing Biological Engineering Development Center Ltd. It says to buy one million sinopharm injections for $ 15 each.

Not only Bangladesh but also Pakistan has has bought this Sinopharm vaccine through the aforementioned manufacturing companies for $ 10 each. Therefore, the amount stolen in the first dose alone was five millionollars which is similar to the mig aircraft fraud.

According to Dr. Gunasena himself, if the money used to buy vaccines is provided by institutions such as the World Bank and the Asian Development Bank, the corporation should not have to use its own money (public finances) in a hurry.

The country needs at least 40 million doses for vaccination (Two doses for the entire population) The government is more interested in importing the SInopharm than importing AstraZeneca for a commission of $ 5 per vaccine.

The Singapore-based company sent a deplorable reply to an attempt to personally import the AstraZeneca vaccine. Lanka e news exposed about this.

Was not a TT sent from People's Bank?

Now, if this revelation is a lie, Dr. Gunasena and the Pharmaceuticals Corporation should be able to prove that no TT was sent worth $ 15 million to the above company through People's Bank. The World Bank and the Asian Development Bank have so far not provided the loan assistance requested by Gota governmet they know the vaccination in Sri Lanka is corrupt.

Who is responsible for the quality of the vaccines?

There was not even a letter of intent when the cabinet paper was presented for the purchase of the vaccines. In the accompanying letter, Sinopfarm requested a LOI dated May 24th 2021. Surprisingly, the cabinet paper was also presented on the same day. Accordingly, it is clear that there was not even an agreement to purchase the vaccine when the cabinet paper was presented. On the other hand, if the World Health Organization (WHO) approve the supplies of vaccines outside the companies approved for production and distribution of the Sinopfrm vaccine, the question arises who is responsible for the quality of those vaccines.

This is a worst corruption a country has committed in the face of a global epidemic. An international inquiry should be launched immediately in this regard.

(Relevant evidence is shown in the images below) 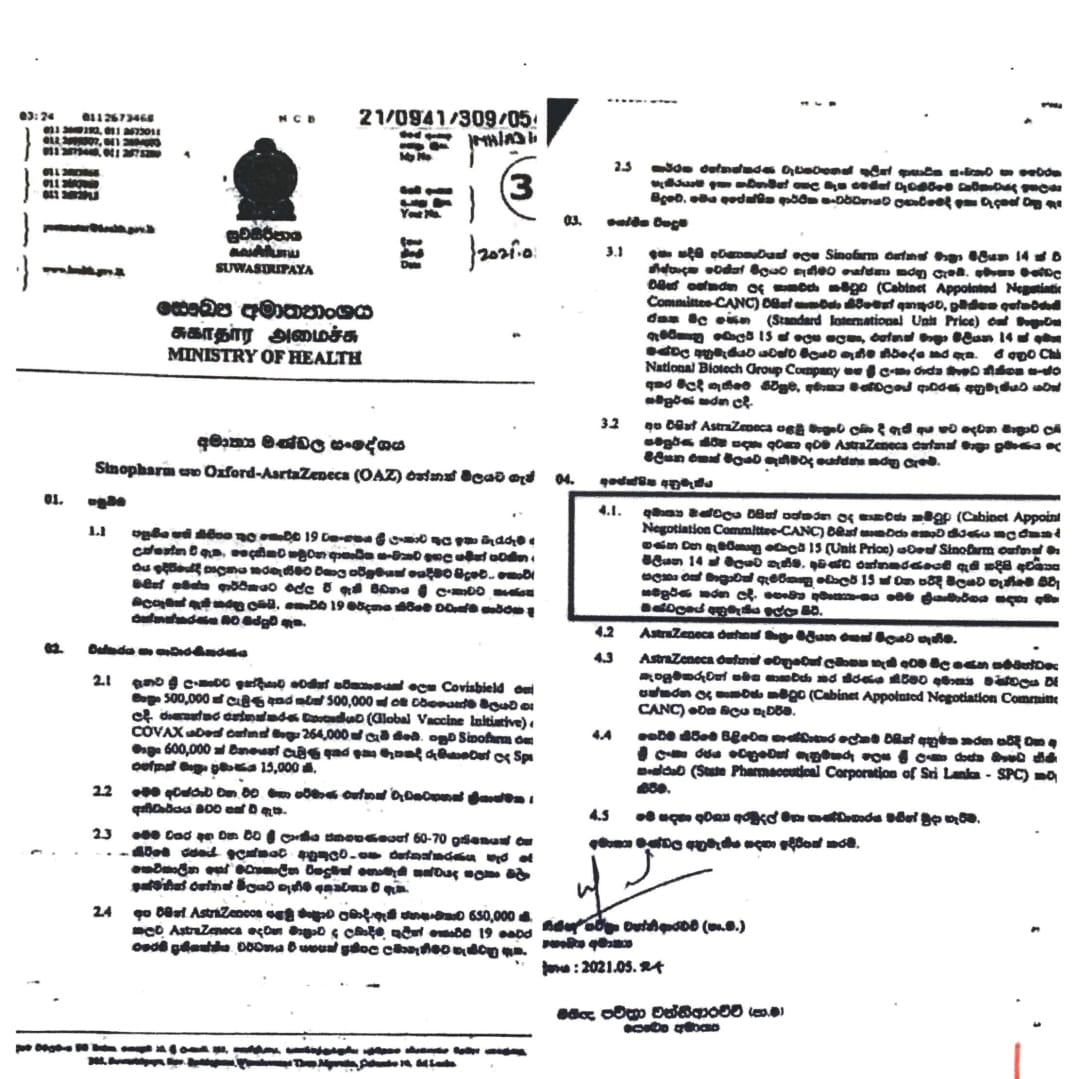 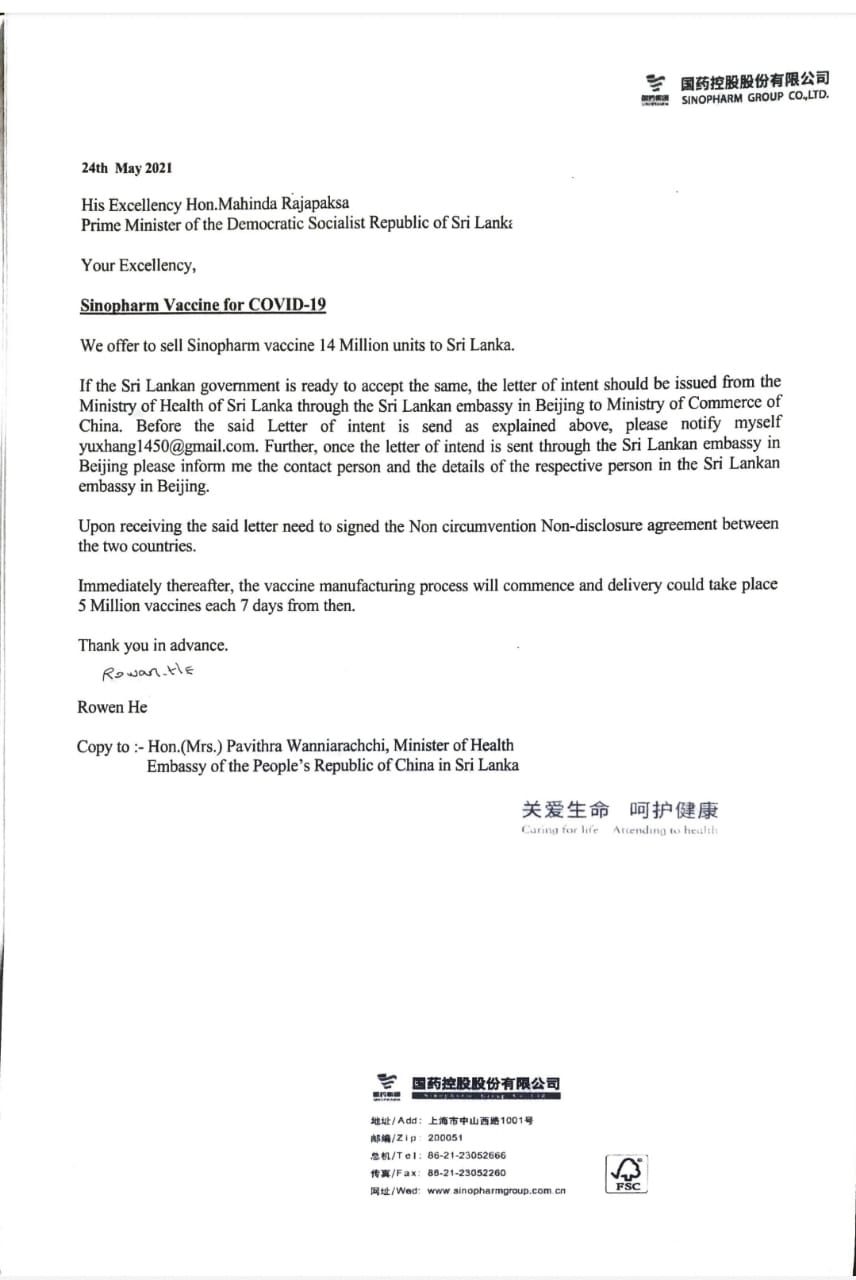