Here is the pedigree of the police minister who transports panties for brothels, who belongs the failed crown, Is it Nandasena or Weerasekere? 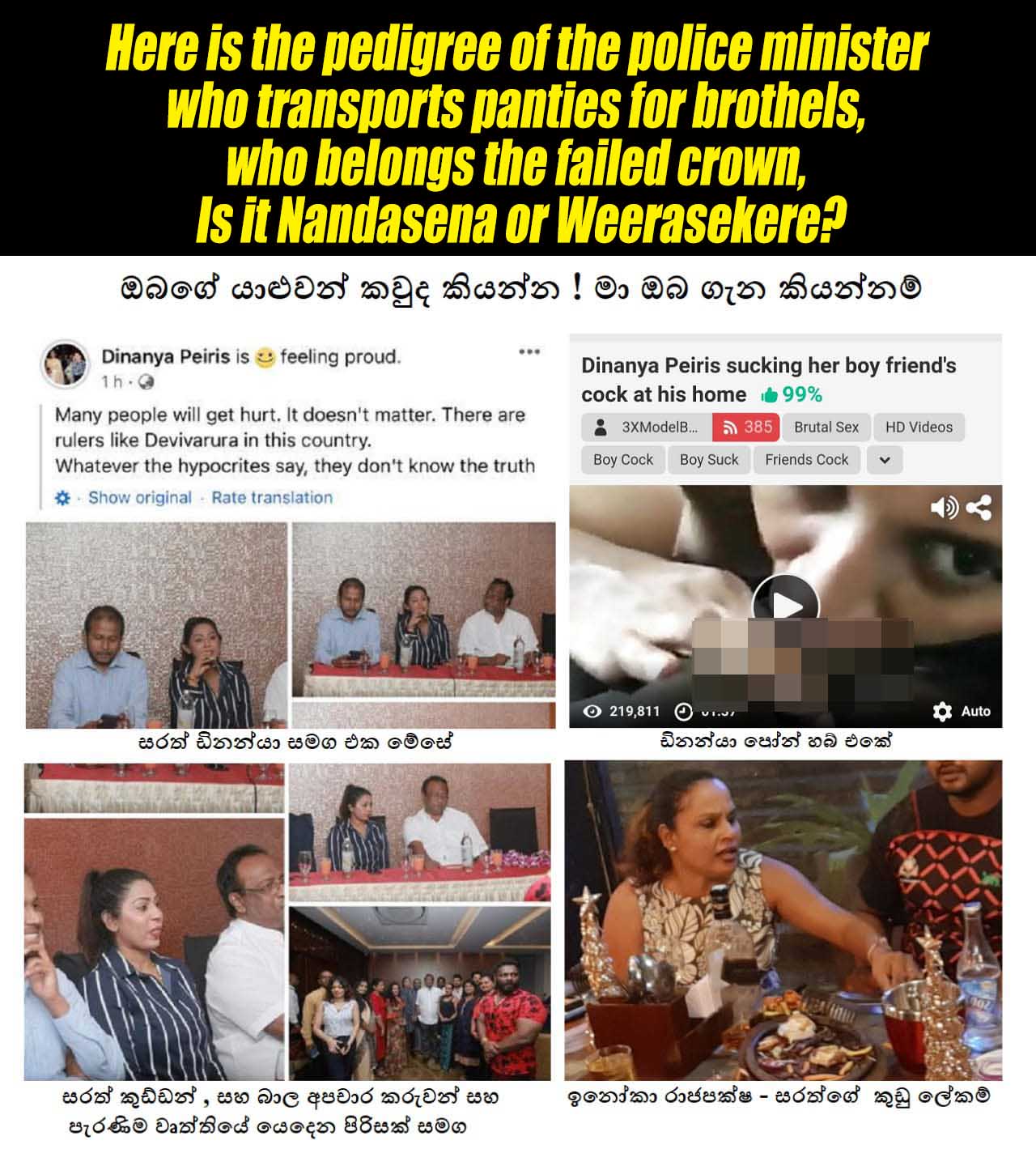 (Lanka-e-News -08.June.2021, 11.30PM) One year after Gota's inauguration, a public opinion was formed that Gota had failed. It was not socialized by anyone for money. Nor was it merely an opposition slogan. The “Gota failed” social ideology was sparked by the people. The people basically wanted Gota to make the structural change needed to rebuild the country that had been in disrepair for 70 years. (System change) "One country - one law" was number one.  It was not a task that cost money. It had to be done with self-discipline. However, Gota failed to establish one law for one country. But it has now become clear that it is not just Gota's fault but the mould of Sarath Weerasekere.

The humiliating behaviour of Sarath Weerasekere who came to protect the rule of law..

Gota too discussed with the doctors the treatment to be applied to the corona. He locked up the country, imprisoning 20 million people because there were no alternatives. Sarath's police arrested the helpless men for violating the lockdown laws. At the time of writing, a helpless man has died at the hands of the police.  People suffered and obeyed the lockdown law. But police chief Sarath danced and partied. He also allowed his friends to the party. The law became a joke. One country - one law proved to be a barbaric one. Eventually, even the President had to intervene to control the stray police. People were outraged by Sarath's casual behaviour. This is the protest you see on social media against Sarath.

Major General Ananda Weerasekera is Sarath's elder brother. He contributed to the Kobbekaduwa Assassination Commission. But the commission, which cost a lot, was a white elephant. A woman named Rohini Hathurusinghe, who claimed to be the wife of a deceased soldier, appeared before the Commission. She said it was her husband who planted the bomb on the defender of Kobbekaduwa. Rohini, an eye-catching woman, became a star in a few days. Meanwhile, Rohini suddenly disappeared. After disappearing for several months, she reappeared in a hospital. She was pregnant at the time. She also said that she got pregnant from Ananda Weerasekera. After this incident, Ananda hid from civil society. Sarath's elder brother Ananda changed his name to Ven Buddhangala Ananda' shortly afterwards.

How both Sarath thwarted Karannagoda..

Wasantha Karannagoda is one of the greatest Navy Commanders in history. As soon as he became Commander of the Navy, he sent home several officers who were a burden to the Navy. Among them was Sarath Weerasekera. There was a clash between Karannagoda and Sarath Fonseka. Taking advantage of the situation, Sarath Weerasekere approached Sarath Fonseka and spoke out against Karannagoda. Seeing the enemy as a friend, Fonseka spoke to Gotabhaya and handed over the Home Guard to Weerasekera. Since then, Weerasekera has carried out underwater fires against Karannagoda. Had it not been for Karannagoda's three-pronged wisdom, even the history we read today would have been changed. The conspiracies of Sarath Weerasekara with Fonseka in the Navy were so serious. Today, Sarath Dabala's stabbing each other is a travesty of fate, a reminder of the Eightfold Path.

Sarath Weerasekere made a film in 2011 called 'Gamani' based on the war. With the end of the war, reconciliation became the need of the hour. But Sarath Weerasekere's film 'Gamani' was a racial slur. One of the aims of making Gamani was to win Sinhala votes in the Ampara district by inciting racism again. Another purpose was to quench Weerasekera's lust by sleeping with the actresses. Dilhani Ashokamala, the lead actress of the film Sarath Weerasekere, took her to bed. Sarath Weerasekere abused by the civil defence forces during and after the making of the Gamani film. If there was a proper investigation of Sarath Weerasekere the latter would be in Welikada and not in Parliament. The first attack on Muslims in Sri Lanka began in Ampara. It was Sarath Weerasekere who started by attacking churches. If the ICCPR act had been active in the crimes committed by Sarath, he would have died in prison.

How Sarath Weerasekera went to Geneva and became frantic..

Sarath Weerasekeras son Sachitra recently got married. He was not a teenager but a 36-year-old middle-aged man. Sachitra is gay. That is why he did not marry until he was old. But at the urging of his parents he had to get married. Chandimal Jayasinghe was a friend of Sachithra. Chandimal proposed a girlfriend to Sachithra. She is Piumi Hansamali's best friend. The bride is Piumi's best friend and the agent is Chandimal, It is up to you to write a story that cannot be written in this media.

Sachithra got married to Malshani Attanayake. She was an employee of the Maharaja organization. Although Malshani is known as a journalist, she worked full time in Killy Maharaja's harem. She won Killy's heart and travelled to many countries, including England and the United States. Another time, she allegedly embezzled millions of rupees for a course in the British Council. She received hundreds of thousands in salaries and privileges. Malshani finally triggered Killy as well.

Rule of law is poked inside dogs’ anus..

Sachithra-Malshani marriage took place breaking 'lock down' rules. The marriage was sponsored by many including Chandimal. Chandimal, Piumi and Weerasekera have a bond like no others. Chandimal while comforting Sachithra supply hookers to Sarath. It was due to that bond that Chandimal broke the lockdown rules and started partying. Rosy Senanayake, Pushpika de Silva and others are playing with the rule of law because of that bond. Piumi Hansamali received clothes because of that bond. Sarath Weerasekera has dumped shit in the police department and the cabinet. Sarath Weerasekera edited CCTV footage to save the VIPs who broke the lockdown rules. Editing CCTV footage of a case is a criminal offence and released distorted CCTV footage to the media without the permission of the court. Oops! The minister in charge of the police poked the law into the dog's anus.

Bringing Weerasekera to Colombo was a serious offence..

Sarath Weerasekere was brought to Colombo by Basil. Basil's plan was to bring down Wimal, who was number one on the capital's preferential list. The extremist racist Sarath was used as a cat's paw to thwart Wimal. There is no one who has sown racism and obstructed reconciliation as much as Sarath Weerasekara in recent times. Sarath Weerasekara first came to Parliament from Ampara. But he did nothing for the people of Ampara who voted for him. It is a crime to bring such a spider to Colombo instead of sending him on his final journey from Ampara. People like Dhanasiri Amaratunga, who should have gone to Parliament from Colombo, lost the opportunity due to fraudsters like Weerasekera. After Sarath Weersekera got his ob done he looked at the people who voted or him with contempt.

Sarath Weerasekera has done a lot of weird scapegoat work in recent times...

Who would own the "FAILED crown" is it Weerasekera and Nandasena..?

Sarath Weerasekeras bestial activities strongly influenced to label Gotabhaya as FAIL. Wiyathmaga became a joke due to people like him. As how Ananda Weerasekeras lion skin came off when Rohini Hathurusinghe became pregnant, Sarath Weerasekara's lion skin came off when Sarath sent panties to Piyumi Hansamali. Today, Sarath Weerasekara is hated not only by the opposition, but also with the 6.9 million people who voted for Gota. No other minister in known history has been so disliked by the people as he is. It is up to Gota to decide on Sarath Weerasekere. If Sarath continues like this, not only will Gota be crowned FAIL, but Gota's ideology will also be FAIL. Above all, Gotabhaya, who could have left the stage in the midst of a shower of applause, is sure to have to step down in the middle of a shit attack.

(You can see who Sarath Weerasekara, from his friends. See the photos below)