People's rights and freedoms continue to be suppressed with the escalating epidemic..! The rule of law is being broken..! 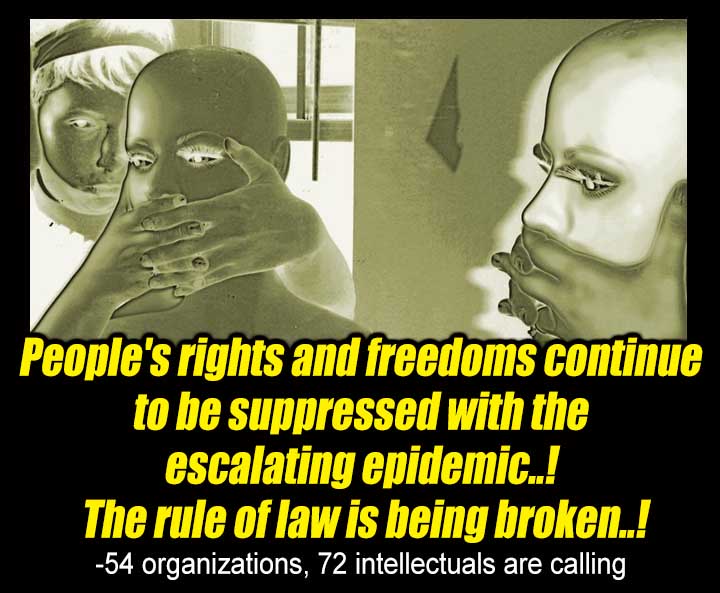 (Lanka-e-News -12.June.2021, 11.30PM) We, the undersigned organizations, trade unions, networks and individuals from across Sri Lanka express serious concern about the escalating pandemic and continuing rights violations and deterioration of the rule of law, while appreciating the efforts of the health sector and many others who have been risking their lives trying to prevent the spread of the virus and care for those affected.

We regret the lack of clear prioritization and disorganized process to conduct vaccinations, the reduction of the number of PCR tests conducted that may artificially reduce the number of reported COVID-19 positive cases, and reports that healthcare workers have not been receiving adequate support. We are also concerned about the lack of action to vaccinate and conduct PCR tests for the most vulnerable groups in society. These should include prisoners in overcrowded spaces with minimum facilities and workers in garment factories, some of whom have been compelled to work despite being unwell, pregnancies and lack of health precautions at the workplace. We also note that food and essential items have not been adequately provided to those who are compelled to quarantine themselves in small and crowded homes, hostels and those who have lost their incomes due to quarantine and lockdowns. We are also shocked to hear of the discriminatory application of quarantine regulations, especially in relation to arrests.

The last few weeks, during the worst month in terms of COVID-19 positive cases and deaths in Sri Lanka, was also a time when we witnessed wide spread repression of freedom of expression and dissent. Earlier this week, the police announced a special team has been deployed to take action against those who create, forward and share false information, and we are very concerned that this is an attempt to crackdown on freedom of expression and dissent. The Secretary to the Ministry of Health issued a circular threatening to take action against health staff who speak to the media. The President is reported to have said that health personnel must share information and suggestions with him rather than sharing them with the public through media. Dr. Chamila Sanjaya, a medical doctor, is facing imminent disciplinary inquiry at the Ministry of Health, which he fears is due to his articles and interviews given to the media. Mr. Chamila Jayasinghe, a senior government official was arrested in relation to a Facebook post about environmental destruction. A youth was arrested in Colombo for urging motorists to honk their vehicle horns in protest after being stranded due to an unannounced road block to facilitate VVIP travel. A journalist from the hill country and his family members faced intimidation in relation to a memorial event that was held earlier this year.

In the highly militarized Mullaitheevu district, Army personnel at a roadside checkpoint attempted to stop a journalist from travelling for his professional duties, despite confirmation from the Officer in Charge of the local police station that journalists are allowed to travel. A new memorial plaque to remember the war dead disappeared overnight amidst heavy military presence before it could be erected in the Mullivaikkal village in the Mullaitheevu district. An existing memorial at the same place was damaged the same night. Tamil politicians, religious clergy, activists and community leaders from the North and East faced intimidation and were the subject of court orders preventing them from participating in memorialisation activities as they attempted to conduct memorials for war dead adhering to health guidelines. A Tamil journalist has been in detention for more than six months, allegedly for a Facebook post expressing opinions about commemorating dead LTTE cadres.

Ahnaf Jazeem, a 26 year old Muslim poet from the Northern town of Chilawathurai, remains imprisoned for more than a year without charges, without being produced before a Magistrate to review legality of his detention. He has been denied meaningful and regular access to his lawyers and has not had adequate opportunities to be visited or call his family members. He has not been provided adequate food and health care and has been subjected to discriminatory, cruel, inhumane and degrading treatment. His family and lawyers suspect these are reprisals against their efforts to secure his release and part of police attempts to compel him to make a self-incriminating statement. Media reports have alleged that his arrest is an attempt to incriminate Muslim Attorney-at-Law Hejaaz Hizbullah, an outspoken minority rights activist and human rights lawyer who has been in detention for more than a year. Hejaaz has been indicted after about eleven months in detention, but his lawyers have not not informed about the details of the charges beyond media reports. Several children and two teachers have filed fundamental rights cases saying they were intimidated to making statements to implicate Hejaaz, and media reports indicate the indictment against him maybe based on the testimony of one child. Last year, the Colombo Fort Magistrate cancelled a flawed identity parade orchestrated by the police and also ordered an investigation into how confidential testimonies given to him (the Magistrate) were leaked to the media. Both Ahnaf and Hejaaz are well known critics of Islamic extremism, and had strongly condemned the Easter bombings. We are also concerned about the approximately 285 Muslims who have been in detention after the Easter attacks without being formally charged. We call for justice for the Easter bombings, including those masterminded it and those who aided and abetted, but it must be through a process that respects the rule of law, the right to fair trial and the rights of suspects and the accused.

In conclusion, we remind the government that vulnerable populations such as prisoners, factory workers and daily wage earners must be accorded due priority in terms of vaccines, PCR tests and health measures as well as humanitarian support. The rights to health and food  must be treated as entitlements of peoples, which the government is duty bound to respect and protect, not privileges bestowed upon the public by those that govern  at their whim and fancy. During a time of national emergency such as this, the public must be able to receive maximum information about the pandemic, including through print, electronic and web media. There must be no reprisals against medical personnel, government officials, journalists, online commentators, environmentalists and others who share alternative information and opinions, question, criticize and challenge the government. A rights-based approach to deal with the pandemic is essential and any restrictions on rights must be prescribed by law, proportionate to the need, time bound and as per the Constitution and not discriminate against any person or communities.

Endorsed by 54 groups and 72 individuals mentioned below: