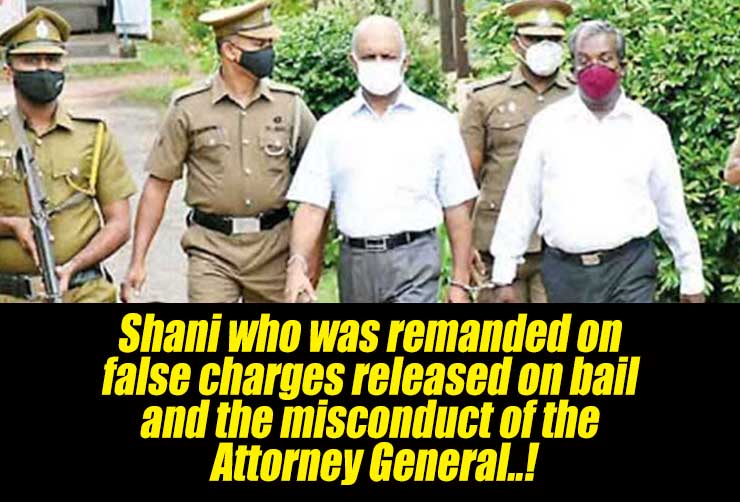 (Lanka-e-News -19.June.2021, 11.45PM) Sri Lanka's most outstanding detective and the former director of CID Shani Abeysekere known as Sherlock Holmes, who was arrested and kept in remand custody on false charges for nearly a year and his colleague sub inspector Sugath Mendis has been granted bail by the court of appeal 16th June. The passports of both have been seized by the court.

Following the rejection of their bail application by the High Court, they filed a bail revision petition in the Court of Appeal. But due to the hypocritical misconduct of the Attorney General's Department, the day-to-day appeal hearing was postponed. The reason for this was that there was o lawyer represented from the Attorney General department for the hearing and requesting for another hearing. Shani Abeysekera, who worked with the Attorney General's Department as a CID detective for nearly four decades, was treated badly by the Rajapaksas. The case was finally heard yesterday and the verdict was postponed to today. Court of appeal judges Nissanka Bandula Karunaratne and U. R. Gurusinghe ruled out by releasing both on bail accordingly.

Rohantha Abeysuriya, who appeared for the Attorney General's Department at yesterday's hearing,'s behavior was extreme than a law student. Although Rohantha's father Ranjith Abeysuriya, was a renowned lawyer who did not bend his back before  politicians, his son Rohantha has become a slave to politicos. Rohantha’s argument assumed the suspects would flee the country as the former CID Inspector Nishantha Silva fled the country, therefore the police detectives has opposed granting bail to Shani and Sugath. Rohantha said since the investigation are not over  and despite a statement had to be obtained from a woman named 'Sanjeewani' who is not in the country the CID cannot complete the investigations, therefore should not be granted bail. This nincompoop Rohantha’s legal arguments are extreme than a law student. Attorneys-at-law Viran Korea, who appeared for Shani and Hafeel Faris and Chaminda Athukorala who appeared for Sugath Mendis busted Rohantha's argument and said the following.

Attorney at law Korea said an objection for bailout is presented against the alleged suspects assuming these suspects would leave the country as Nishantha left the country, these alleged suspects would never leave the country and stood in the country and face all the challenges and would come to give statements whenever they are summoned. Responding to a query that the statement of a woman named 'Sanjeewani' could not be obtained Viran Korea said that a non-completion of investigations is not a reason not to grant bail for this incident. Korey said it is unfair to remand the suspects claiming unable to obtain a statement for ten months and it is a rule to grant bail.

Korea said Shani Abeysekera had a heart attack and several other illnesses, and also  Shani had contracted the Kovid 19 virus while in prison. Lawyer Korea said that doctors had confirmed that his life is in danger due to his health condition and submitted a medical report to the court. He further said that even when ordinary suspects in prisons have been granted bail there is no reason not to grant bail to Shanni Abeysekera who is ill.

Why did the Attorney General act with personal hatred against Shani?

Accordingly, during the good governance it was this judge advocate Shavindra Fernado who obstructed the investigations and prevented the CID not to summon taking statements from the alleged navy suspects in the case of the 11 students who were abducted, extorted and killed by the Navy. Shani Abeysekera, who conducted the investigation at the worst possible time, reported to the court that Shavindra Fernando of the Attorney General's Department influenced the Navy witnesses who killed the 11 students. It was due the influence of these triplets including Shavindra made the Attorney general to take revenge from Shani while in remand custody. That was the reason why Gotabaya did not hesitate to appoint Sanjay Rajaratnam as Attorney General, even though he is a Tamil. Rohantha Abeysuriya is nothing exceptional but a part of the same feces.

Allegations that does not exist in the world..

However, the false accusation against Shani is one that does not exist in the world. It was about a false allegation against Shani who conducted the investigation alleging Shani influenced the investigation of a witness in the case of Vass Gunawardena who is currently on the death row convicted of the murder of Shiam after completing all the proceedings. The case against Vaas was first heard in the High Court. That too was during the Rajapaksa regime. He was sentenced to death after a lengthy trial, and he filed two appeals against the verdict it in the Court of Appeal and later in the Supreme Court. The original sentence did not differ from those appeals. In one or all of the above three cases, no witness said that Shani influenced the witnesses. It appears the witnes were waiting for President Gotabaya to come to office. However the world will not be able to end legal trials if the cases that have been heard in this manner are revived time to time when politicians influence the judiciary when they come back to power. This is not legitimate litigation, but the raw thugs of murderers who come to power from the people.

There is no victory without a struggle..

However, Shani Abeysekera, who regarded duty as his divine soul, will continually stand straight facing all sorts of grievances, miseries and anxieties from wicked rulers such as the suspensions from work, non-payment of wages, heart attacks, corona and neglect of opposition opportunistic politicos will be honored by all law-abiding civilized civilians. Small but civic organizations and media organizations acted in his favor. At one point, in three days, the Young Journalists' Association, along with other organizations, signed an online petition seeking Shani's release, hoping to get 3000 signatures. Three thousand signatures were expected but by the end of three days it had surpassed six thousand signatures. Finally, the EU's recent resolution against Gota governnment denial of GSP also demanded that Shani Abeysekera be acquitted and released without charge.

Truth must be fought to win. There is no victory that simply falls into you. That is the only truth that has existed since the beginning of human civilization.