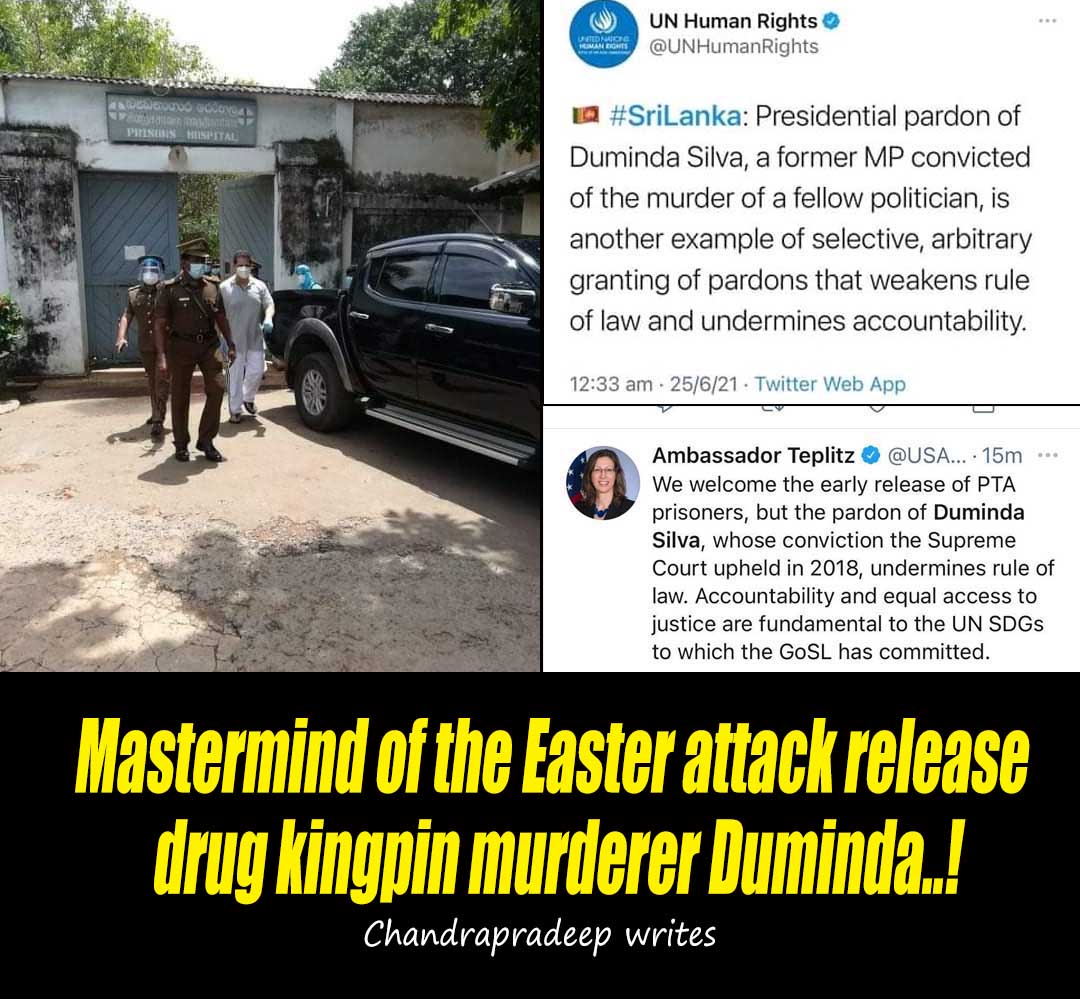 (Lanka-e-News -25.June.2021, 6.35PM) Gotabaya Rajapaksa, who has been pointed the finger as the mastermind of the Easter attack, has completely abused his presidency and gave presidential pardon to Arumadura Romelo Silva alias Kudu Duminnda who was sentenced to death by all three courts for the mass murder of four people, including Bharatha Lakshman Premachandra, who was killed on the highway while he was a presidential adviser. The mass murderer has been released yedterday (24) under a special presidential pardon and sent home on the occasion of the Poson full moon poya day.

One social media post said, "Only a murderer understands the plight of a another murderer."

We state with evidence that Gotabaya Rajapaksa is directly accused of being the mastermind of the Easter attack. The key piece of evidence is that Gotabhaya Rajapakse was the defense secretary who approved the payment of the suicide bomber by military intelligence. Suresh Saleh was the head of the military intelligence at the time. Gotabhaya and Saleh also supported Saharan's extremist Tawheed Jamaat and the extremist Bodu Bala Sena and Hindu Shiva Sena. Gotabaya stated that he would run for the presidency even before the smoke from the Easter bombings was abated, putting his brother Mahinda and Pohottu leader Basil in trouble. As soon as Gotabaya became President, he appointed Suresh Saleh as the Chief of State Intelligence. At the same time, veteran detective Shani Abeysekera, who was investigating the Easter attack, was removed and imprisoned on false charges, while all other CID investigators were transferred to separate units. It is to prevent the truth of the attack from being revealed. To this day, Gotabaya has taken steps to keep Sirisena and his men safe who were directly responsible for the attack, as the commission report. Accordingly it is inevitably pointing the finger at Gotabaya as the mastermind of the Easter bombing series.

That’s why social media says, “Only another murderer understands the grief of a murderer”. It should come as no surprise that such a person has abused his presidential executive powers and released Kudu Duminda, who was on death row.

Violation of Article 34 of the Constitution..

Gotabhaya has exercised the power of the President to pardon a person on death row in violation of Article 34 of the Constitution. Presidential pardons must have the written consent of the judges who handed down the sentence. Thereafter written approval of the Attorney General is required. Both must be signed and approved by the Minister of Justice. The President can pardon only after receiving all three reports. None of them has given such written approval to the judges or the Attorney General or Justice Minister Ali Sabri to Gotabhaya. Accordingly, Gotabhaya has acted in complete violation of the Constitution in pardoning Kudu Duminda.

We do not want GSP concession..

The presidential pardon for Kudu Duminda has already drawn strong national and international resistance. The main one is that the UN Human Rights Council in Geneva issued a Twitter message protesting against it. (Shown here) "The pardon granted to former parliamentarian Duminda Silva, who was convicted of the murder of a contemporary politician, is another example of the eroding rule of law and accountability in Sri Lanka," the UN Human Rights Commission said in a statement.

This is exacerbated by the fact that the President of Sri Lanka has acted in a manner that kicks off the GSP Plus concession at a time when the EU is already assessing whether the GSP + concession should be extended to Sri Lanka based on the Human Rights Council reports. Presidential pardon for Kudu Duminda guarantees that Sri Lanka will not receive GSP concessions.

Breakinng the accountability of the United Nations..

US Ambassador to Sri Lanka Teplitz has also expressed concern over the Presidential pardon of Gotabhaya to Kudu Duminda. Her Twitter message states: (See below) “ We welcome the earl reelase of PTA prisoners, but the pardon of Duminda Silva whose conviction the Supreme Court upheld 201 undermines the rule of law, accountability and equal access to justice are fundamental to the SDG’s  which the GOSL has committed” The ambassador's statement means that the Sri Lankan government has violated its responsibility to the United Nations by pardoning Kudu Duminda.

The Bar Association of Sri Lanka, Samagi Jana Balawegaya and the victim Hirunika Premachanda, a former Member of Parliament, have issued statements against the pardon of Kudu Duminda.

Did he feel the end time is near?

It is a well known infamous secret that Gotabaya when becoming the president to give pardon to Kudu Duminds. Drug kingpin Duminda is an associate of Gotabaya. After Bharatha's assassination, it was Gotabaya who protected Duminda and secretly sent him to Singapore. In order to make Gotabaya the President, Kudu Duminda's brother Reno sow lies about and washed Gota’s dirty line in public through his drug channel Hiru. That is to get a presidential pardon to Duminda. However, due to the opposition to Gotabhaya within his own party, he had told the Silva family that he would pardon Duminda for the last time before leaving the presidency. But now Kudu Duminda was suddenly pardoned, probably because Gotabaya himself felt that his time is coming to an end.