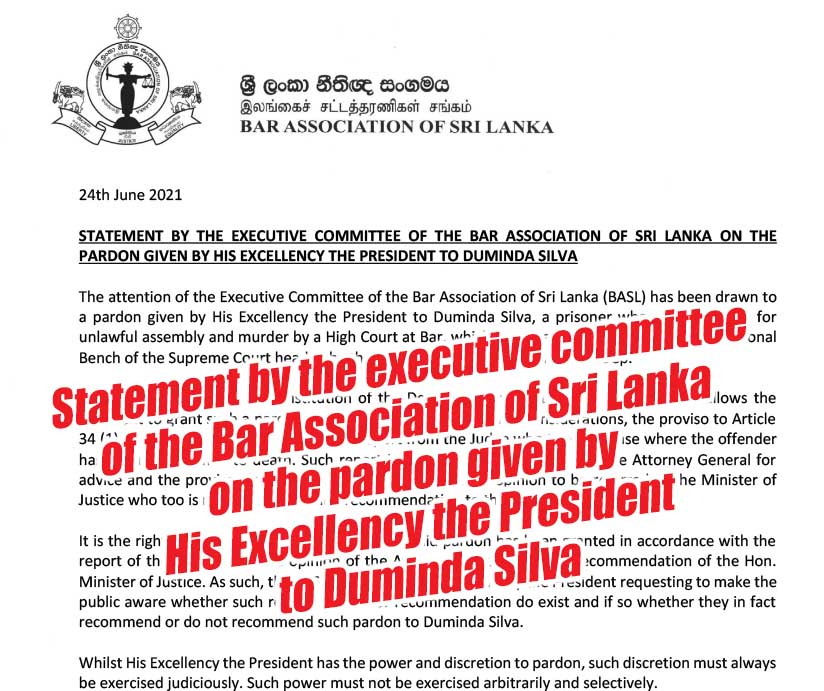 (Lanka-e-News -25.June.2021, 6.45PM) The attention of the Executive Committee of the Bar Association of Sri Lanka (BASL) has been drawn to a pardon given by His Excellency the President to Duminda Silva, a prisoner who was convicted for unlawful assembly and murder by a High Court at Bar, which was unanimously affirmed by a Divisional Bench of the Supreme Court headed by the then Chief Justice Hon. Priyasath Dep.

Whilst Article 34(1) of the Constitution of the Democratic Socialist Republic of Sri Lanka allows the President to grant such a pardon, either free or subject to lawful considerations, the proviso to Article 34 (1) requires the President to call for a report from the Judge who tried the case where the offender has been condemned to death. Such report is required to be forwarded to the Attorney General for advice and the proviso also requires the Attorney General’s opinion to be referred to the Minister of Justice who too is required to submit a recommendation to the President.

It is the right of the public to know whether the said pardon has been granted in accordance with the report of the trial Judges, the opinion of the Attorney General and the recommendation of the Hon. Minister of Justice. As such, the BASL has written to His Excellency the President requesting to make the public aware whether such report, opinion or recommendation do exist and if so whether they in fact recommend or do not recommend such pardon to Duminda Silva.

Whilst His Excellency the President has the power and discretion to pardon, such discretion must always be exercised judiciously. Such power must not be exercised arbitrarily and selectively.

The BASL is mindful that in the past too there have been instances where selective pardons have been granted without any material to justify the basis on which the respective prisoners were selected for granting of such pardons, and the BASL has on those occasions strongly taken up the same position which the BASL is now taking up.

(a) The basis on which Duminda Silva was selected for the purpose of granting a pardon under Article 34 (1) of the Constitution;

(b) The circumstances which were taken into consideration in the granting of such pardon;

(c) The reasons as to why the case of Duminda Silva stands out from others who are currently sentenced;

(d) Whether a report was called for by His Excellency the President from the Trial Judges as required by the Proviso to Article 34 (1) prior to granting of the pardon to Duminda Silva and if so the contents of the report;

(e) Whether the advice of the Attorney General was called for prior to granting of the pardon to Duminda Silva and if so the contents of such advice;

The Bar Association of Sri Lanka maintains that if any one or more considerations stated above, were not satisfied in the current case, the pardon granted to Duminda Silva would be unreasonable and arbitrary and will result in erosion to the Rule of Law and result in a loss of public confidence in respect of the administration of justice.