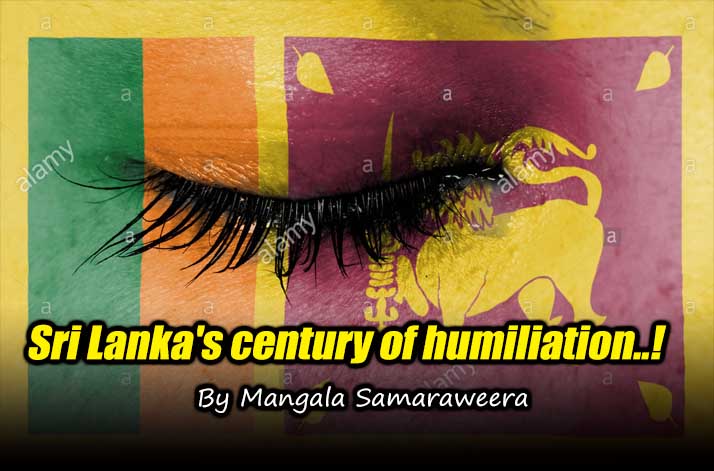 (Lanka-e-News- 02.July.2021, 2.15PM) “Reflect continually on the fact that all things as happen now, also happened before, and on the fact that they will happen again. The whole dramas and the comparable scenes…from history of the past….All these were similar only the actors were different.”

The Sunday Times of 27th June says that the Central Bank of Sri Lanka has taken the unprecedented step of issuing a commemorative coin for the centenary of the Communist Party of China. This news followed ‘hot’ on the heels of the Colombo Port City bill which the government tried to rush through Parliament until the Supreme Court shot down a few of the clauses which could have violated our sovereignty and posed a serious threat to our countries independence in the years to come. Adding to the paranoia of many Sri Lankans was the shocking exposé by ’Sirasa’, one of the leading broadcasters in Sri Lanka and perhaps the only truly independent TV stations in this country today ( I too have been at the receiving end of its criticisms during the various periods I served as a Cabinet Minister, during the last 3 decades) where we saw Chinese personnel in Chinese Military uniform dredging a historic lake in the deep south (where youth unemployment is at its highest) under the patronage of a senior cabinet Minister of the ruling family. These are a few examples which makes one wonder whether the principle of “extraterritoriality” being applied liberally in our statecraft today is seen as the continuation of diplomatic relations with a friendly country or as a major infringement of Sri Lankan sovereignty? Will the historians of the future call this point in time as the beginning of Sri Lanka’s century of humiliation?

China is one of world’s greatest and most ancient countries; more a civilization than a country! The “Celestial dynasties” which ruled for millennia sincerely believed that they were the heavenly representatives sent to rule a vast kingdom - HONGUO/the middle kingdom, refined and civilized in a world of barbarians. The Emperor was perceived as mankind’s supreme sovereign, often referred to as the “Emperor of humanity” and his diplomats were called “Heavenly Envoys from the Celestial Court. As Honguo was considered the centre of the universe, all interactions with the ‘barbarians’ of the outside world were controlled and limited; learning/translating the languages of the barbarians were banned without special permission, entering and traveling within the kingdom was also not allowed and only the Port of Guangzhou (Canton) was open to foreigners to conduct their trade. Even the envoy from the Queen-Empress Victoria had to hang around the port for weeks until it was decided to grant an audience with the Emperor in Beijing on the basis that the English diplomat will ‘kowtow’(to prostrate oneself and to touch the ground with ones forehead thrice) before the Emperor when received in the Royal court.

With the advent of high imperialism in the 17th century, western powers tried repeatedly to penetrate this vast kingdom for trade/commercial purposes but China remained one of the few Asian countries which could not be colonized by the British to become a part of the Empire where the ‘sun never sets.’

The East India Company was founded in 1600 with the objective of promoting trade and commerce in the Indian Ocean and China. By 1800, the company accounted for more than half the world’s trading and laid the groundwork for the British Empire and the Indian Raj; East India company rule was established in large parts of India in 1757 exercising military power and even assuming local administrative functions until 1858 when the British crown assumed direct control of India - ‘the jewel in the Crown’ where opium was grown to be sold to the ‘natives’ in all corners of the Empire. In 1839, the opium war started against China in the face of determined and stiff resistance by the Qing dynasty to open up its vast market to British opium traders. Consequently, the British ordered the blockade of principal ports in China and were poised to attack the ancient capital of Nanjing, when the Chinese sued for peace. The treaty of Nanjing of 1842 imposed on China the cession of Hong Kong to the British, a payment of $6 million in indemnity, and the opening of five ports in which trade would be allowed and westerners would be permitted to reside. Although China was not formally colonized, the treaty of Nanjing made it a de facto colony of the British Empire and the Qing court lost much of its independence in commercial and foreign policy. The principle of extraterritoriality enshrined in this treaty was to become a major infringement of Chinese sovereignty and the opium traders residing in the treaty ports would only be subject to their own countries’ laws and not that of China.

Thus began, what is known in China today as its “century of humiliation.”

Nearly two hundred years later, as the first quarter of the 21st century is drawing to a close, China is now poised to become one of the world’s leading economies with ambitions of becoming a military super power as well. Like the East India Company in earlier centuries, the investment, trading and commercial arm of China is now the Belt and Road Initiative. (BRI) started in 2013 and incorporated into the constitution of China in 2017. According to the BRI, the initiative is “a bid to enhance regional connectivity and embrace a bright future.” In fact we know that the East India Company colonized the better part of the world with similar noble objective of civilizing ‘savages’ and natives promising all a ‘brighter future’. The imperial powers of the west carved out a very bright future for themselves and their countries over the last five hundred years but at what cost to the countries and the peoples they colonized? Isn’t the BRI the same old concept wrapped up in brand new gift paper?

What was challenged in the Supreme Court recently - the Colombo Port City Act. Could well end up being a modern day trojan horse or a Nanjing Treaty for Sri Lankans in the years ahead. The port city without any checks and balances and Parliamentary oversight will create a city which is more or less a law unto itself; it will be a centre for international money laundering for the local and international mafia. The likelihood of this piece of extraterritorial real estate turning into a centre for international espionage for the super powers to protect/ subjugate the peace and stability of the Indian Ocean should also not be dismissed as mere fantasy.

Sri Lanka needs FDIs and trade opportunities badly and desperately. Having an international Financial Centre on reclaimed land is a very good idea if it’s based on international law and participation, not merely serving the interests of a single country or two. In fact the first proposal for such a venture came from one of our very own Sri Lankan conglomerates in 2000. However, such proposals need not come at the cost of our sovereignty; it cannot be at the cost of our friends who provide 60% of our trade; it cannot be at the cost of diminishing our friendship with our friend and neighbor, India, 20 odd kilometres away. Sri Lanka has not been blessed with oil, diamonds, gold or copper; we have been blessed with a beautiful island and a most propitious geographical location on one of the busiest shipping routes in the world.

Therefore it is also in our greater interest to work with all countries to ensure that the Indian Ocean remains a zone of peace and stability while taking the maximum advantage of our position to create wealth and prosperity for our next generations. In the great power play between superpowers, Sri Lanka cannot afford to be a pawn of one group or another like Cuba in the early 1960s when not ideological but financial considerations compelled the Cuban government to allow USSR to install nuclear missiles 65km from the USA nearly triggering off a nuclear war in the Bay of Pigs. Sri Lanka cannot afford to follow a confrontational and isolationist policy with the international community. Especially in this age of pandemics and international trade, multilateralism is the way forward. Westphalian concept of sovereignty is no longer valid and we must abide by our international obligations for the betterment of our own people. Sri Lanka must revert to the foreign policy almost all governments have followed since independence; despite our relative “insignificance” in the International order, Sri Lanka was a much loved and esteemed member; from Washington to Beijing, from New Delhi to the Kremlin, from Downing Street to Tokyo, from Brussels to Ghana our leaders were welcomed with open arms.

Today, like somnambulists walking towards the precipice while tumbling over one humiliation after another, we are pushing our sons and daughters, towards a future of unimaginable horrors.

Democracy and freedom, Justice and the rule of law, unity in diversity, multilateralism and international cooperation is the only way forward.