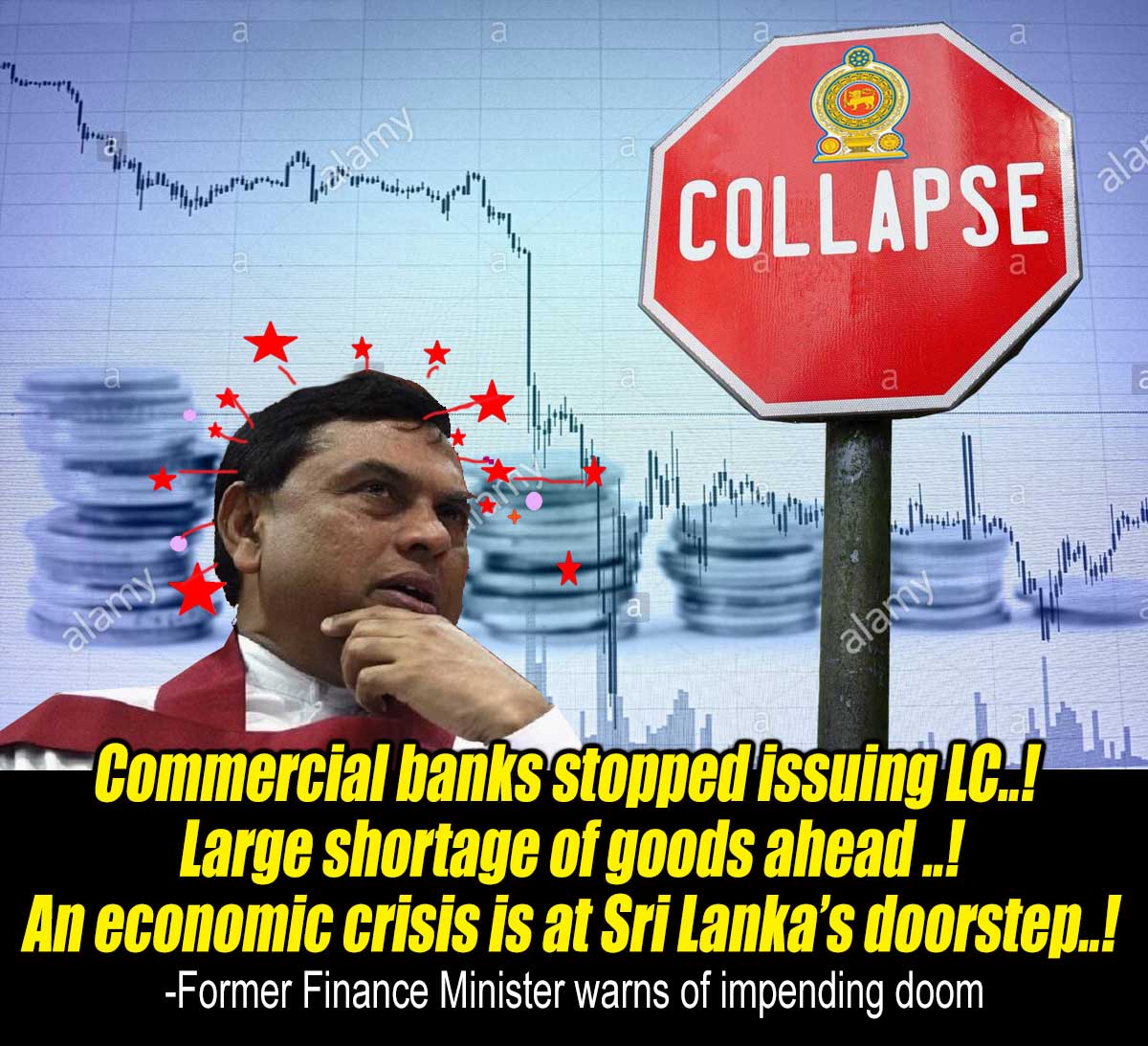 (Lanka-e-News -10.July.2021, 3.15PM) It is reported that most major banks in Sri Lanka have stopped issuing Letters of Credit for the importation of goods. According to reports while commercial banks accept applications for letters of credit, their issuance is continuously being postponed.

Country towards an economic abyss...

It should be noted that the failure to issue letters of credit by commercial banks for the importation of raw materials or spare parts for local industries and export based industries is leading the country towards an economic abyss.

From mid-2020 onwards, the government continued to restrict imports and restrict foreign exchange, a common feature of these policies.

Severe shortage of goods in the next three months..

Unless a permanent solution is found, the country will face a severe shortage of goods in the next three months resulting in the collapse of manufacturing plants and the inability to ship exports on time, which will further affect the country’s already dwindling foreign exchange reserves.

Simply put, it's surprising that some commercial banks are refusing to even merely send a Telegraphic Transfer message to import USD 10,000 worth of spare parts for a factory.

Meanwhile, the refusal of some banks to send foreign currency to their children studying abroad has caused concern among parents.

The Minister of Finance of Gotabaya Rajapaksa's Saubhagye Rajya (Prosperous Government) commenced his work by issuing Gazette Notification No. 2184/21 on 16 July 2020 directing the opening of letters of credit only within 90 day and 180 day credit limits for the importation of nearly 175 items. The importation of a wide range of goods was also banned by gazette notifications signed by the Minister of Finance.

The Central Bank of Sri Lanka is also following a policy of silence in this regard.

As one solution to this, the Central Bank of Sri Lanka has empowered commercial banks and other financial institutions to obtain foreign loans.

When the government or the Central Bank of Sri Lanka is unable to obtain foreign exchange, it will take time for commercial banks to decide whether they can do so.

It is also a known fact that in the last 18 months, the country has banned the import of wall and floor tiles, bathroom sanitary ware, tires, motor vehicles, fertilizers and agro-chemicals and given the opportunity to its crony businessmen to become millionaires.

Attempts have been made to save foreign exchange by licensing the import of sugar, palm oil and motor vehicle spare parts, but to no avail.

When this country was handed over to President Gotabaya Rajapaksa at the end of our tenure, in 2019, the government revenue was LKR 1895 billion.

One third of the national income was given to business friends..

It should be pointed out that the main reason for this crisis is that as soon as this government came into power, it provided tax concessions amounting to LKR 600 billion (approximately one-third of total revenue) for mere political gain and to please their business associates.

Inexperienced officials and ministers were appointed to manage the gradually developing economic hubs. The state corporations and the statutory boards are now all recording huge losses.

The letters of credit issued by our banks were accepted by any bank in the world based on the trust placed in our country by international financial institutions due to the high ratings given to the country and its banking system.

International confidence in the government has been lost...

Shortly after the current government came to power, that breach of trust reduced the international ratings of the country and its banking system to 'CCC'.

It is reported that there are instances where international banks are refusing to accept letters of credit issued by our country's banks on the grounds that this government is unable to repay its foreign loans putting Sri Lanka’s business community in further peril.

All are Man-made crisis..

All these crises have been created by the present government in the last 18 months.

With six months left in our good governance government, Parliament was dissolved to introduce a new economic vision for the country.

All of that has become a dream today.

When the country was handed over to Gotabaya Rajapaksa and the new government, foreign exchange reserves stood at USD 7.6 billion but declined to USD 4.1 billion in the next 18 months.

Foreign exchange reserves are maintained in that sense as a deposit to import crude oil, petroleum, etc., which are essential for the medicines, foodstuffs, and energy required by the people of an import- export-oriented country.

But due to the use of those reserves to settle long-term foreign loans obtained under your governments a long time ago and the short-term international sovereign bonds obtained during your last reign, our country today has fallen to the level of Venezuela in Latin America as well as Greece in Europe.

When the loan repaid, the reserve will be fallen to USD one billion..

The international sovereign bond to be settled this month was issued in the year 2011 when Mahinda Rajapaksa was in power.

If these are settled by using our foreign exchange reserves, the balance would be reduced to USD 3 billion.

It is also reported that the Ceylon Petroleum Corporation has USD1.3 billion in outstanding bills to be paid for oil imports.

As of last Friday, many commercial bank loan applicants have been told to deposit at least 50% of the value of the letter of credit in foreign currency with the bank in order to open their letters of credit.

Here is the destruction in the next three months...

Today, the economic crisis is on Sri Lanka’s door step.

Due to the continuous non-opening of letters of credit by commercial banks, there will be a shortage of essential commodities such as food, medicine and spare parts for the next three months, creating a depression in the country.

If such a situation arises in the country, this government cannot escape that responsibility.

Lack of chemical fertilisers and agrochemicals will reduce yields, create food shortages in the country and drive up the prices of limited commodities in the market.

We are not late yet..

There are many economic solutions that can be done to lift the country out of the economic crisis.

We urge the government to seek national and international advice to steer the country's economy in the right direction.

On behalf of all Sri Lankans, I further urge the government to not hide the economic crisis from the people and to stop empty development programmes and work to win this economic war as a team without placing its trust on a few individuals."