No dollars sent to LC..! A ship that brought oil to Sri Lanka was stranded in the Colombo seas for 6 days without unloading oil..! A Fuel ration system is coming up soon..! 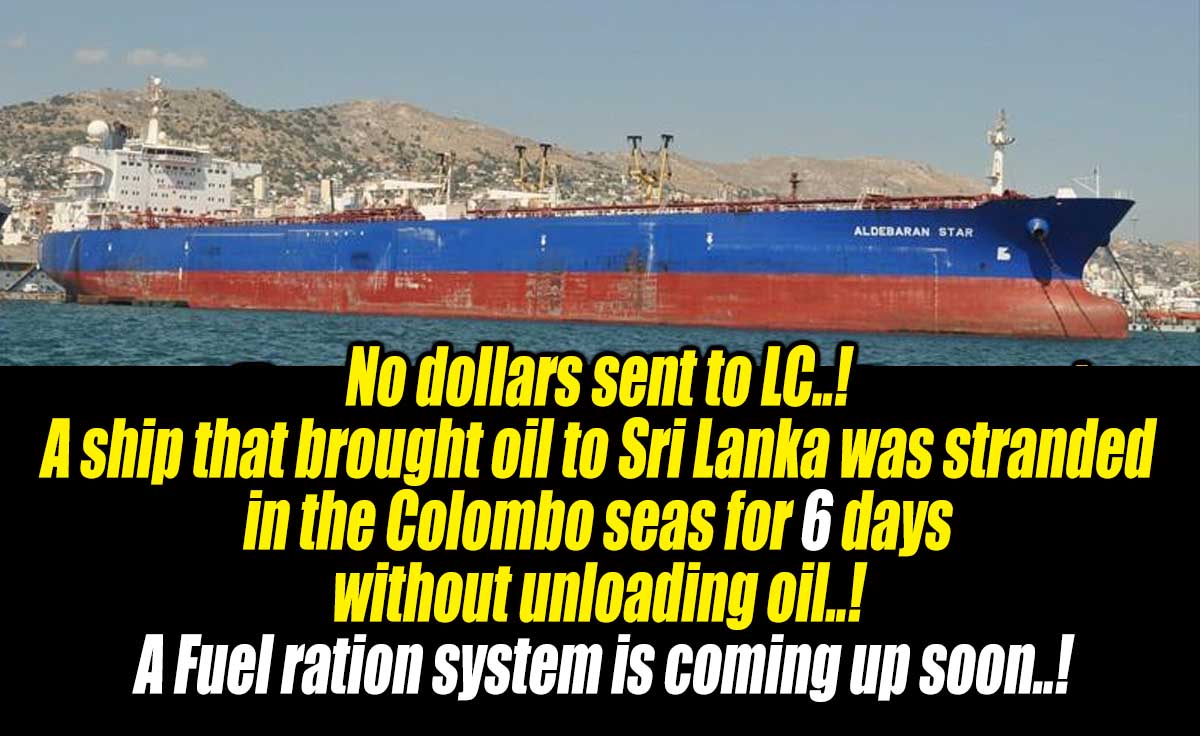 (Lanka-e-News -11.July.2021, 4.00PM) A ship carrying fuel to Sri Lanka has been stranded outside the Port of Colombo for 6 days without unloading, due to a shortage of dollar reserves created by the uncivilized family government in Medamulana.

The ship which is sailing under the Saudi Arabian flag, is a crude oil tanker called KHAFJI. Its capacity is 97160 tons. On 5th of July the ship arrived to the port of Colombo at 3.45 p.m. on Sri Lankan time. The ship which was carrying a consignment of fuel has been sailing without a guidance for last  5 days ,up to today.(11) The LC sent by Ceylon Petroleum Corporation to the oil company has mentioned dollars, but  Sri Lankan banks has not sent dollars to the particular company’s banks. In that manner the company has not received the clearance documents. That is the reason of unloading the fuel.

Ships carrying fuel to the port of Colombo do not have to wait like other ships. Connected to the Single Point Mounting Buoyancy or SPM buoy which is  set up in the deep sea outside the harbor, the ship’s oil is pumped directly to land storage on land without an hour’s delay while at sea. The SPM buoy belongs to the Petroleum Corporation not to the port.  Accordingly the KHAFJI ship is delayed not because of anything else but because of the crisis in Petroleum Corporation.

The Petroleum Corporation already owes more than $ 1.2 billion for the oil it has borrowed. Minister Gammanpila said that the reason for the recent increase in fuel prices was that the government did not have sufficient  dollars to import oil at least for two days.

To mention that an oil tanker arrives and idle in the harbour for 5 days is an unusual and extremely costly incident.  That is because of the delay charges of at least $2000-3000 per hour for an oil tanker delay. Accordingly, if there is a delay of one day, probably around US $ 50,0000/  a late fee of should be paid. As it is already 6 days delayed The government will have to pay over $ 300,000. It is also a huge burden for a country that suffering without dollars.

In this crucial situation, a swindler has sworn in as the country’s finance minister who has no higher education qualifications, at least who doesn’t have the knowledge of GCE Ordinary Level Economics, or without any business experiences.