-An announcement by the Editorial Board of LeN 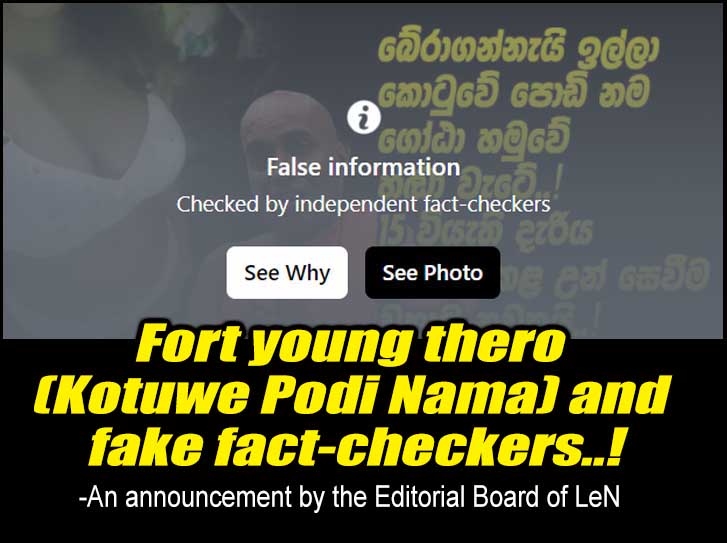 (Lanka-e-News -16.July.2021, 12.40 PM) A website called Sri Lanka Fact Crescendo a propaganda tool of the Podujana Peramuna and Iraj’s website  (Iraj who wears dresses) publishing distorted news through social media networks. This has been started after Lanka e news revealed information about two persons, including two so-called monks who have been identified as raping a 15 year old girl.

Fact Crescendo is led by a henchman of the Podujana Peramuna Milinda Rajapaksha, who acted as Gotabhaya’s media spokesman before he became president.

If a Fact Check or ‘accuracy of information’ is to be ascertained, the persons should first contact the Lanka e News which published the information. They should have called and ask what credible evidence we have with us because we are a banned media in Sri Lanka, our evidence cannot be revealed in the news, but those who seek the accuracy of the nature of the evidence can be revealed. But so far neither Iraj nor Milinda Rajapaksha nor the presidential Media unit they work for have asked about it.

These people who have sexual disorders, use filth, associate with prostitutes in the fort, and write fact check reports based on the facts presented by the accused, are a gang that steals the public’s ‘money from the 80 million organic fertilizer propaganda project. They check the facts in a wonderful way. They ask from the accuses whether you did this.  Any thief or crook does not accept the crime. Then these fact-checkers say the news is untrue. The company set up by Facebook with Sri Lankan government after the Easter bombing in Sri Lanka acknowledges this fraudulent fact check.

Anyone who examines the evidence given by its owner before an independent commission in the United States can understand that Facebook is also a fraudulent company that does anything for money. Many more will be revealed when the case filed by Reporters without Borders (RSF) in France against Facebook is heard in Paris.

These people connected to the so called fact media checkers in Sri Lanka are writing about the ongoing investigation by the CID. About the documents submitted by the police to the court. Which Deshabandu Tennakoon five days ago (11) evening ordered to suspend the investigations.

Lanka e News we stand for the accuracy of our report. The 15 years old girl was sold for money by Moratu Rajiv and his mistress Shashi Prabha who are addicted to drugs. A person close to Mount Lavinia OIC has provided transport facilities for the sale of the girl. Through The website that the girl has been sold, so far identified two networks of people who sold young children for sex. The information on the first network has now been socialized, but the second is now being hidden. The reason for this is that a strongman of the Police Department has joined this network. The list also includes those who are close to the President, those close to the Minister of Police and those in robes.

The hired fact-checkers may have been told to get the Presidential Spokesman if possible, to disprove our news. At the very least, get the police media spokespersons to say that our news is wrong. This is because after we have revealed the news some decent gentlemen’s names were publicized in social media as they got involved in girl’s raping matter. Police spokesman immediately rejected these names, but he never announced that our news is wrong.  We continue to advocate for the accuracy of Lanka e News.