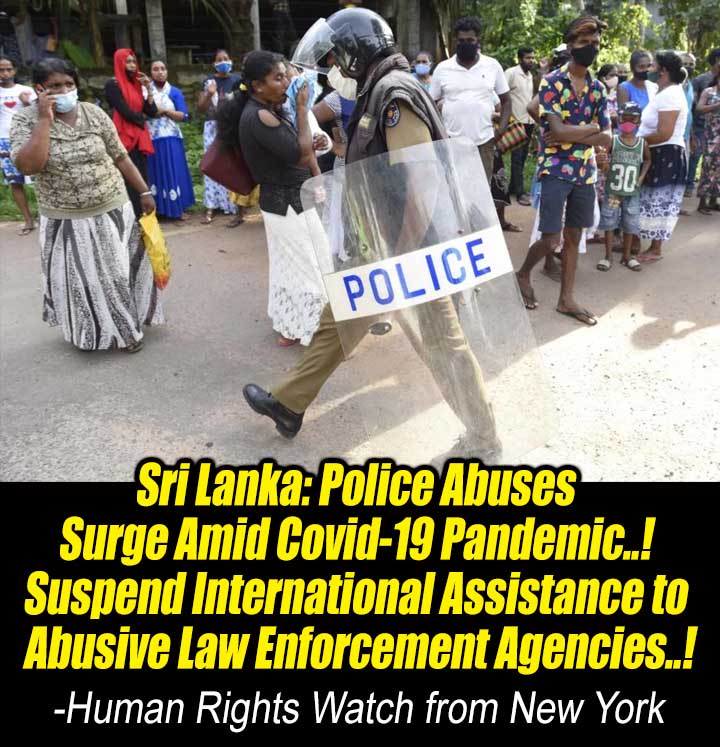 Recent police abuses reported in the media include alleged extrajudicial killings, torture, and arbitrary detention. The government should restore independent oversight of the police and meaningfully investigate and prosecute alleged police abuses. International partners, such as the United Nations Office on Drugs and Crime and the United Kingdom’s Police Scotland, should suspend assistance programs until there is progress on accountability and reform.

“Sri Lanka’s police seem intent on building on their past record of serious abuses, instead of cleaning up their act,” said Meenakshi Ganguly, South Asia director at Human Rights Watch. “The UN, UK, and others working with Sri Lankan law enforcement should recognize that without the political will to reform on Sri Lanka’s part, their engagement risks appearing to endorse abusive agencies.”

Since May 2021, the police have been implicated in several unlawful deaths, including some linked to disproportionate and abusive enforcement of Covid-19 quarantines.

On May 17, police allegedly stopped D. Sunil Indrajith, 49, for violating a Covid-19 quarantine in Weligama and ordered a civilian police employee to beat him. He collapsed in the road and was killed by a passing bus. The incident was captured on CCTV, and two policemen and two others were subsequently arrested.

On June 3, Chandran Vidushan, 22, died in police custody shortly after being arrested in Batticaloa. His family alleged that police tied him to a tree outside their house and severely beat him with poles, then took him away. The authorities said that he died of a drug overdose.

On June 6, Mohamed Ali, 42, died after police arrested him for an alleged quarantine violation in Panadura, near Colombo. The police reported that he was fatally injured jumping from a moving police jeep. Ali’s wife alleged that the police beat him to death. Two policemen are reportedly facing a disciplinary procedure for “negligence.”

Police abuses have also been linked to a government crackdown on “the drug menace.” Police fatally shot Melon Mabula on May 11, and Tharaka Perera Wijesekera, on May 12. Both were in police custody for alleged involvement in organized crime, where lawyers and others had warned that their lives were in danger. In a statement the Bar Association of Sri Lanka said that both cases “have all the hallmarks of extra-judicial killings.”

In 2020, President Gotabaya Rajapaksa established a task force of senior military and police officers to create a “disciplined, virtuous, and lawful society,” and placed the police and National Dangerous Drugs Control Board under the Defense Ministry. In February 2020, the chief of defense staff, Gen. Shavendra Silva, who is banned from visiting the United States due to his alleged involvement in unlawful wartime killings, said, “The security forces, which eradicated terrorism in the country 10 years ago, have been given a new task - to combat - drug trafficking.”

The police crackdown on drug dealers and users has allegedly involved planting drugs on suspects, torture and other ill-treatment in police custody or at “rehabilitation” centers, and invasive body searches of female suspects. Trafficking or possession of drugs in Sri Lanka carries severe penalties, including death or life in prison. No executions have been carried out in Sri Lanka since 1976, although death sentences continue to be handed down and about 1,500 prisoners are on death row.

People accused of using drugs can be arbitrarily detained without charge or trial for “rehabilitation” in facilities run by the army. A new report by Harm Reduction International found that the treatment of inmates in Sri Lanka’s “rehabilitation” centers includes near-daily beatings and other physical abuse amounting to torture.

The UN high commissioner for human rights, Michelle Bachelet, in her report to the UN Human Rights Council in January, wrote that she was “concerned by a recent series of deaths in police custody and in the context of police encounters with alleged criminal gangs” amid a “militarized approach to law and order and drug control.” She highlighted five possible extrajudicial killings involving the Sri Lankan police between June and October 2020.

Police officers who investigate alleged crimes by the security forces face threats and prosecution on trumped-up charges. Senior Superintendent of Police Shani Abeysekera, who had investigated numerous high-profile cases, including the successful prosecution of a senior police officer for the contract killing of a businessman in 2013, was suspended by the new Rajapaksa administration in January 2020 and arrested in July 2020 for falsifying evidence.

He was released on bail in June 2021 after the Court of Appeal found that the evidence against him was “a fabricated, false version and an exaggerated account or concocted story involving a set of collaborators or conspirators, to unduly cause prejudice and harm.” While in prison he contracted Covid-19 and had a heart attack. He has repeatedly said that, although he has received death threats against him and his family, his police protection has been withdrawn.

The current police abuses come in a context of shrinking civil and political space under the Rajapaksa administration. The Bar Association of Sri Lanka has condemned the police’s use of the Covid-19 pandemic to curtail freedom of expression, including detaining peaceful protesters at a quarantine facility in July.

International partners should suspend their engagement with abusive Sri Lankan law enforcement agencies until there is demonstrated political will to address the situation, Human Rights Watch said. Such assistance risks appearing to endorse or lend legitimacy to agencies that are unwilling to improve their respect for human rights.

“The Rajapaksa government needs to demonstrate that alleged police abuses will be properly investigated and prosecuted, and the law should promote accountability, not weaken it,” Ganguly said. “Until that happens, international partners should be under no illusions about human rights in Sri Lanka, and they should withhold assistance to abusive law enforcement agencies.”