How did the hospital system collapse? 'Corona subterfuge' and the ground reality 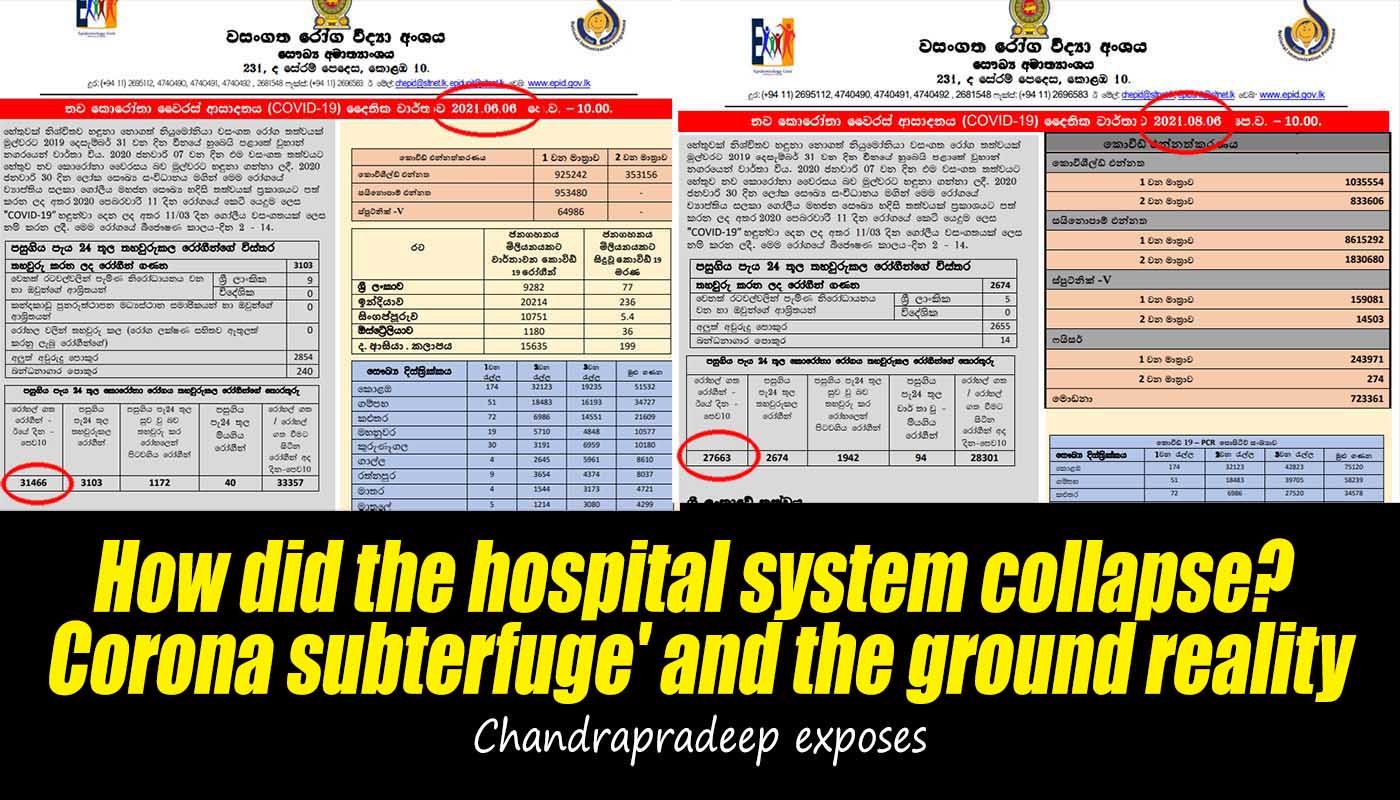 (Lanka-e-News -09.Aug.2021, 11.00PM) With the outbreak of the Delta variant of the Covid virus, the number of patients has become so high that national hospitals are no longer able to cope. The government also introduced a new hotline number (1390) for home treatment, suspending the admission of new patients. Meanwhile, private hospitals have also suspended the admission of new patients from today. This is due to the fact that in addition to their hospitals, they have also used hotels in Colombo to accommodate their patients.

But there is a strange conundrum in the government's calculations. It follows below.

The official statistics of the government regarding corona can be considered the daily report issued by the Epidemiology Division of the Ministry of Health. Accordingly, exactly two months ago, on June 6, 2021, the number of patients admitted to the hospital was 31,466. (http://www.epid.gov.lk/web/images/pdf/corona_virus_report/sitrep-sl-sin-06-06_10_21.pdf) Two months later, on August 6, 2021, the number of hospitalized patients was  27,663. (http://www.epid.gov.lk/web/images/pdf/corona_virus_report/sitrep-sl-sin-06-08_10_21.pdf) Accordingly, after two months, there is a shortage of 3803 patients. By June 6th, when 31,000 patients were admitted, the hospital system was no longer in crisis. But today, with 27,000 patients admitted, the hospital system is overflowing and in crisis. How did the hospital system cope when the number of patients was reduced by three thousand eight hundred?

Accordingly, it can be concluded that the official government statistics published today are untrue. These are called 'corona subterfuges’ In fact, the government has been playing havoc with people and the world since the beginning of the epidemic. The result of those quarrels is the unfortunate situation that exists today.

The government is also lying about the current unfortunate situation. According to Lanka e News, the number of dead bodies is around 1000. While burying the infinite number of corona corpses in the world, Sri Lanka imposed laws that all corpses should be cremated. In the face of protests from Muslims and the international community, it was later decided to bury Muslim bodies in Ottamawadi and burn everything else. The bodies are now piled up because there is not enough time to cremate them in the existing crematoriums. One corpse takes an hour and a half to cremate and another hour to extinguish. Accordingly, it takes about two and a half to three hours for one corpse. Although cremation takes place 24 hours a day, only eight bodies could be cremated per day. There are no crematoriums in the country. Accordingly, in order to prevent the accumulation of corpses, a decision should be taken to bury the corpses. It is also reported that only another small number of 75 bodies are likely to be buried in Ottamawadi. Accordingly, the government should decide on burying the bodies and find new burial sites without lying. The government should face the reality.

The prophecy we said has came true..

Lanka e News on May 9th this year published news under the caption "The risk of over 30,000 deaths ..! A scary prediction from the Washington University Institute of Health Metrics and Evaluation about the epidemic in Sri Lanka ..!" They said the death toll in Sri Lanka is expected to rise by the end of August, with about 16,000 new beds needed and 3450 ICU beds needed, but currently only 295 ICU beds are available, there are 91% - 96% of critically ill patients without ICU beds. They also warned that a number of lives could be lost. But the GMOA crooks responded to the news by saying that the data was incorrect. But that has become a reality.